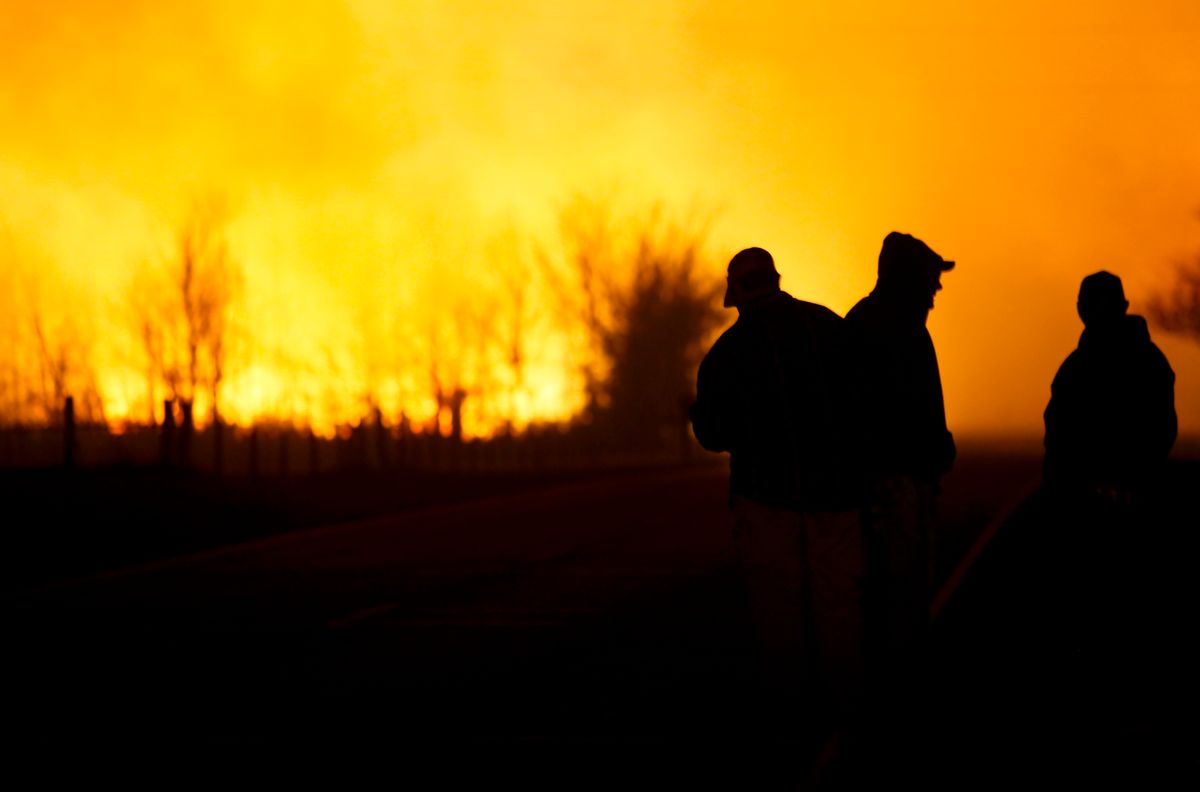 Wildfires fueled by gusting winds, hot, dry weather, and desiccated plant life have burned nearly 900,000 acres of Oklahoma so far this year, a record, as well as parts of Kansas and Texas. The blazes have destroyed dozens of buildings and killed seven people as well as hundreds of cattle.

Late winter and early spring are typically the peak wildfire season for the region, as dry, windy weather arrives before the spring green-up of crops and other plants. But this season has been particularly active because of drought conditions that have creeped up during the winter, driven by record warm temperatures and a lack of precipitation.

Climate change is expected to impact many of the factors, such as precipitation, that can contribute to wildfires. But exactly how it might affect future wildfire risks in the central and southern Plains is an open question, and one that has seen relatively little attention to date.

While this time of year is typically the main wildfire season for Oklahoma and surrounding areas, this season has seen a record-breaking amount of land scorched by 133 large wildfires ignited in the Panhandle and eastern Oklahoma, with conditions exacerbated by a perfect storm of ideal fire weather and a deepening drought. (Large wildfires are those covering 100 acres or more.)

That drought has developed due to a combination of exceptionally warm fall and winter temperatures and a lack of precipitation.

While total precipitation to date is actually close to average in the Panhandle, with a little more than 5 inches since Sept. 2 in the town of Buffalo, about 3 inches of that precipitation came during a single January ice storm, with almost nothing falling since.

Temperatures, meanwhile, have been unusually warm. October through February was the warmest on record for Oklahoma; on Feb. 11, temperatures in Magnum, in the southwest of the state, hit 99°F (37°C), tying the highest winter temperature ever recorded in the state.

Those continually warm temperatures increase evaporation during the winter season and exacerbate the drought.

“That’s when we saw the large leap in drought conditions, when normally we wouldn’t see that,” state climatologist Gary McManus said.

While warmer winter temperatures would normally lead to an early spring green-up, the lack of precipitation has stymied that development, leaving plenty of dead and dormant vegetation to fuel wildfires, McManus said.

Winter wheat has also taken a hit from the dry conditions; normally firefighters try to steer wildfires toward the green wheat fields to quash the flames, so with the winter wheat suffering, fire “just takes over and burns everything,” McManus said.

While the drought conditions set the background for the recent wildfires, the weather in recent weeks has also played a major role. Hot, dry, windy conditions are perfect for wildfires to develop, and that’s exactly what Oklahoma has periodically seen in recent weeks, first in the Panhandle and more recently across the eastern half of the state.

When fires erupted in the Panhandle in early March, relative humidity was exceptionally low and winds were gusting up to 60 mph in some places.

The fires were due to “a lot of bad luck, sort of serendipity involved” with all of these various conditions coming together, Victor Murphy, climate services program manager for the National Weather Service’s Southern Region, said.

Like many other natural disasters that strike, this record fire activity raises the question of how climate change may impact wildfire risk in the future. The question is a tricky one, though, because of all the competing factors that influence wildfire activity, not to mention the human element, with humans causing and contributing to many wildfires.

But there are, at least, indications of how climate change may impact some of those contributing factors, even if there’s no overall picture yet of how wildfire risks may change.

Perhaps the clearest line that can be drawn is to temperature rise: As greenhouse gases continue to accumulate in the Earth’s atmosphere, global, and therefore U.S., temperatures will continue to rise on average. 2016 was the hottest year on record globally and the second-hottest for the U.S. As the years and decades progress, record hot temperatures from the global to the local level will only become more likely.

“With the large inter-annual variability in this region, it is difficult to attribute events such as this fire season to climate change, but the projections of warmer winters certainly favors an increase in fire potential and perhaps [a] shift in timing,” Mark Shafer, director of the Southern Climate Impacts Planning Program and associate state climatologist, said in an email.

That shift in timing of the peak wildfire season, perhaps to a few weeks earlier than in the current climate, could occur because warming winters mean an earlier arrival of spring. For example, the warm winter across much of the U.S. this year has led to a spring green-up that is about three weeks ahead of average.

One of the other factors that can help make conditions ripe for wildfires, drought, is also a complicated phenomenon with many contributing factors. Rising temperatures would tend to make it easier to tip into drought and would make drought conditions worse than in the current climate.

But precipitation is also a major factor in drought, and the signals there are less clear. Overall, intense downpours are expected to increase with warming, a trend already seen across the U.S., though the biggest increases have come in the eastern half of the country.

If that trend bears out, though, it could lead to rains falling in more concentrated bursts, with more time between rainfall events. When rains fall in these more intense bursts, the ground is less able to soak up the moisture than it would be if those rains came in gentler, more spaced out events.

But overall precipitation trends don’t tell the whole story. The seasonal breakdown is key to wildfire risk: Wetter springs and summers lead to abundant crops and other plant life; if they are followed by a dry fall and winter, all that plant matter can dry out and provide ready fuel for fires. (This seasonal variation was likely a factor in this year’s wildfires, as recent growing seasons have been fairly wet.)

But seasonal trends in precipitation with warming are still murky.

“Oklahoma tends to be in an area of high uncertainty regarding seasonal changes in precipitation,” Shafer said.

Most studies to date that have looked at how climate change might influence wildfire risks in the region have focused on the summer wildfire season, McManus said. He would like to see more researchers start to look at the winter/spring risk.

“I think it’s much more important than the summer fire season, at least at this time,” he said, citing the fact that last year also saw major wildfire activity in the northwest of the state.

For now, officials are still on alert for further wildfire development, with burn bans active in many Oklahoma counties. A train of storms is slated to move across the country from the Pacific over the next week, bringing a mixed bag to the Plains. Such storms can bring strong, dry winds over the region, amping up the wildfire risk.

But some areas could actually see some rain, which would be a welcome change, allowing plants to green up and curtailing the fire danger.

“Hopefully we can get some moisture,” McManus said.