Interior Secretary Zinke is a Roosevelt fanboy. So does that mean he won’t trash the place?

Zinke has already approved a lease of 56 million tons of coal in Utah and another sale of more than 900,000 acres 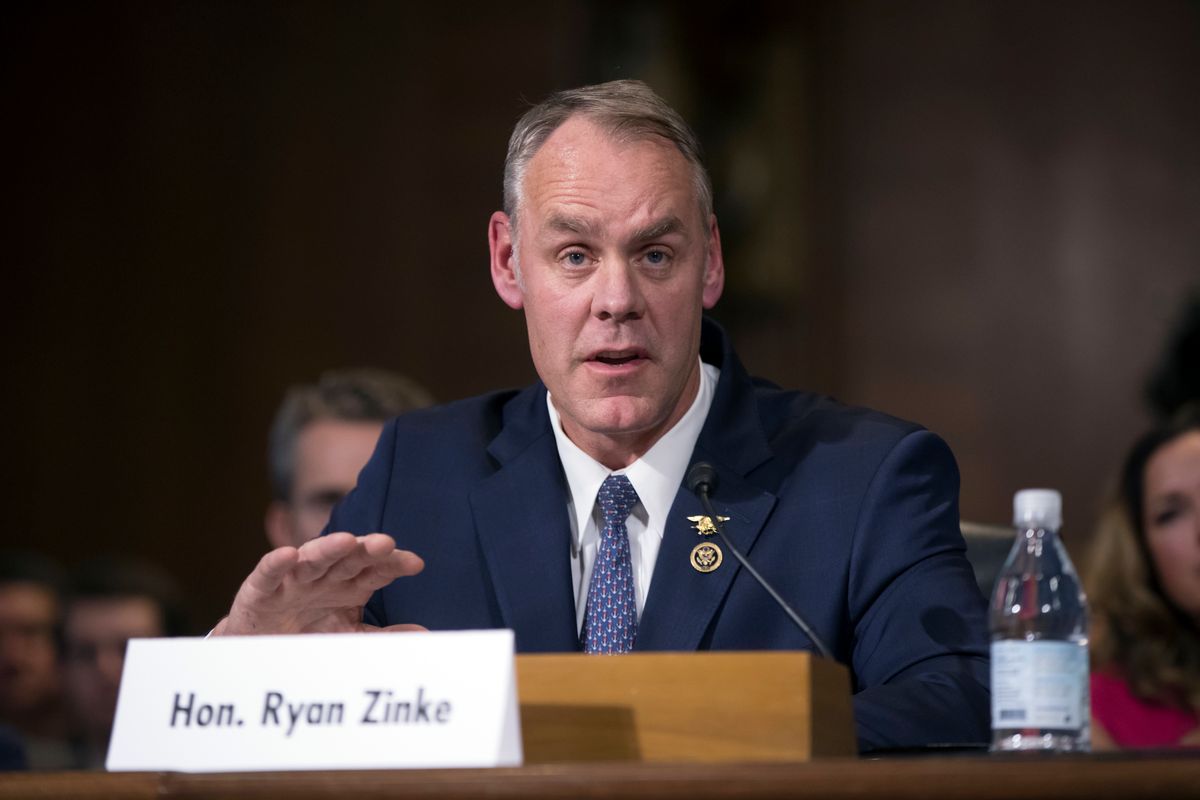 In a White House crowded with dirty deplorables, new Interior Secretary Ryan Zinke stands out. For starters, Zinke is the only member of the Trump administration who rode to his first day in office on a horse. He’s decorated his office with hunting trophies: a bison named Rosie and an elk named Ron. And he’s a huge fan of Teddy Roosevelt, the country’s “conservationist president.”

Zinke’s Twitter bio declares him a #TeddyRoosevelt and #PublicLands fan. Since taking office, he’s tweeted a photo of himself and a park ranger that looks like an attempt to recreate the classic shot of Roosevelt and John Muir at Glacier Point in Yellowstone National Park.

“The spectacular view that started it all,” the tweet says.

Responses to the tweet were mostly skeptical and sneering, pointing to Zinke’s affinity for the fossil fuel industry. “It won’t look as stunning with oil rigs,” one user wrote.

For all his professed love of the outdoors and esteem for Roosevelt, Zinke’s environmental record is mixed at best. His opinions on climate are hard to pin down. In his confirmation hearing, he said that climate change isn’t a hoax but that the role of humans in causing it is up for debate. Within weeks of taking office, Zinke approved a lease of 56 million tons of coal in Utah and another sale of more than 900,000 acres off the Gulf of Mexico for oil and gas development.

So what does it mean that Zinke calls himself a Roosevelt conservationist? Roosevelt’s legacy is mixed, inspiring both hero-worship and disgust: He preserved what he saw as “pristine” areas but expelled the indigenous people who lived there.

To help clear all this up, Grist talked to the noted historian and Roosevelt scholar, Douglas Brinkley, author of The Wilderness Warrior. Brinkley described Zinke as both a “climate change cover up artist” and possibly the only advocate for the environment in President Donald Trump’s cabinet.

Our interview has been edited and condensed for clarity.

Q. One thing that Zinke and Roosevelt definitely have in common is their political party. But it sounds strange nowadays that a noted conservationist like Roosevelt was in the GOP.

A. The fact is, the Republican Party was the progenitor of the modern conservation movement. It was all born out of Theodore Roosevelt’s presidency from 1901 to 1909 and included his first head of the U.S. Forest Service, Gifford Pinchot. The TR-Pinchot cabal ended up saving over 234 million acres of wild America.

Back then, it was in vogue for some western Republicans to call themselves conservationists. It meant that you enjoyed the strenuous life, or as Roosevelt called it ‘the outdoor life.’ TR preached the gospel of conservation by saying that places like the Redwoods of California or the Tetons of Wyoming or Big Bend in Texas were American heirlooms. Europe had the Louvre and Westminster Abbey and the Vatican, and we had these sacred outdoor temples. There used to be a lot of religious imagery with American national parks, monuments, wildlife refuges. There was a sense of a cathedral of redwoods, a god-ordained or god-made Grand Canyon.

Q. When did the Republican approach to the environment begin to change?

A. In 1912, both TR and Pinchot broke from the Republican Party and created the Progressive Party, or the Bull Moose Party, the most successful third party in U.S. history. By 1933 Franklin Roosevelt had embraced conservation for the Democrats and made it part of his progressive agenda. Environmental conservation became a calling card of the Democratic Party from ‘33 to today.

With that said, there still were Republicans who defined themselves as conservationists. Walt Disney got involved with conservation as a Republican, and of course, it’s Richard Nixon who creates the Environmental Protection Agency, and signs the Endangered Species Act and clean air legislation.

So conservation used to have a bipartisan appeal; both parties would claim it. But really since Ronald Reagan was elected in 1980, conservation was replaced by the term “environmentalism,” and it became seen as part of the ‘60s counterculture. Republicans started distancing themselves from being over-identified with environmentalism because it implied more federal government and more regulations. Today, we’re very polarized on protecting public lands and not too many Republicans want to be called an environmentalist.

Let’s say my audience is made up of conservatives. If I talk about keeping America’s lakes and rivers clean and that we need wildlife, I get a standing ovation. When I use the word “environmental” or “environmentalism” you can just see that you’ve lost them.

Q. Zinke says he’ll be a conservationist in the Teddy Roosevelt tradition. Do you buy it?

A. I don’t consider Zinke an environmentalist. If he were he’d be denouncing climate change loudly. What he is, is somebody like Theodore Roosevelt. He appreciates the American landscape.

I think by and large Roosevelt would like the new Secretary of Interior. First off, he was a big egotist, TR, and here’s this guy telling everybody that he loves Theodore Roosevelt. Secondly, Zinke was a Navy SEAL, and TR loved military service. And third, he’s a hunt and fish guy. He’s probably one of the better high-profile Republican conservationists in the country today. I do think he’s a true-blue conservationist.

The question is, in a world where EPA is disappearing and you’re opening up public lands, is Zinke willing to really fight for clean air and water and protect our park systems from things like climate change? Climate change is making wildlife leave refuges, it’s creating bug infestations, it’s causing drought. There are a whole host of problems the Secretary of Interior is going to have to tackle. And I don’t know yet, none of us know yet, how much leeway if any Donald Trump is going to give him to pull together a kind of sane Republican-oriented conservation program for the public land.

Q. You mention climate change. Zinke has waffled on the subject. Is it fair for Zinke to say he’s committed to Roosevelt’s legacy without acknowledging how climate change will harm the American landscape he loves?

A. I do think it’s fair for him to say that because we don’t know how TR would have responded to climate change. We can make hunches but I’m a historian and we try not to put words into dead people’s mouths. I think what he’s trying to communicate is he does care deeply about being a steward of the land and he doesn’t want to see forests clear cut or reckless mining. He’s putting his past decades of behavior as an outdoorsperson front and center of who he is. So that part of him is positive.

I think intellectually it’s bankrupt to be a climate change cover up artist and say it doesn’t matter much or not be able to speak honestly to the American public about it, because it is affecting the national parks and monuments that he is going to oversee.

It isn’t like appointing somebody who doesn’t get it. He’s probably the least controversial of Trump’s picks. Look at a pick like Scott Pruitt to head the Environmental Protection Agency. He is one of the most grotesque choices in American history to run an agency, somebody who has basically spent his career trying to destroy it. Zinke’s not like that. He does have a great respect for the national parks and monuments that he’s going to be a steward of. In the end, he may be the one voice at times promoting a conservation ethic in a Trump administration that’s hell-bent on drilling and mining anything they can.

Q. Roosevelt’s treatment of Native Americans was deplorable. Given modern movements like Dakota Access, do you think Zinke’s identification with TR could mean trouble for Native Americans?

A. It’s important to keep in mind that Theodore Roosevelt was president a long time ago. The views concerning Native Americans of say 1901 to 1909 are vastly different than in the 21st century. And Theodore Roosevelt was part of that generation that had just so-called “conquered the West.” I find the problem with Zinke being that he seems to want to ignore the EPA of 1970. That he wants to turn back the clock.

So I just think it’s not as much about the Native American protest in North Dakota, than that TR hated big, powerful, private corporations. He went after people who were Big Timber, Big Oil—he would war with them. Zinke is like a rubber stamp for those lobby groups.