A broken process worsens: Democrats may filibuster Neil Gorsuch — but Mitch McConnell broke the Senate when he ignored Merrick Garland 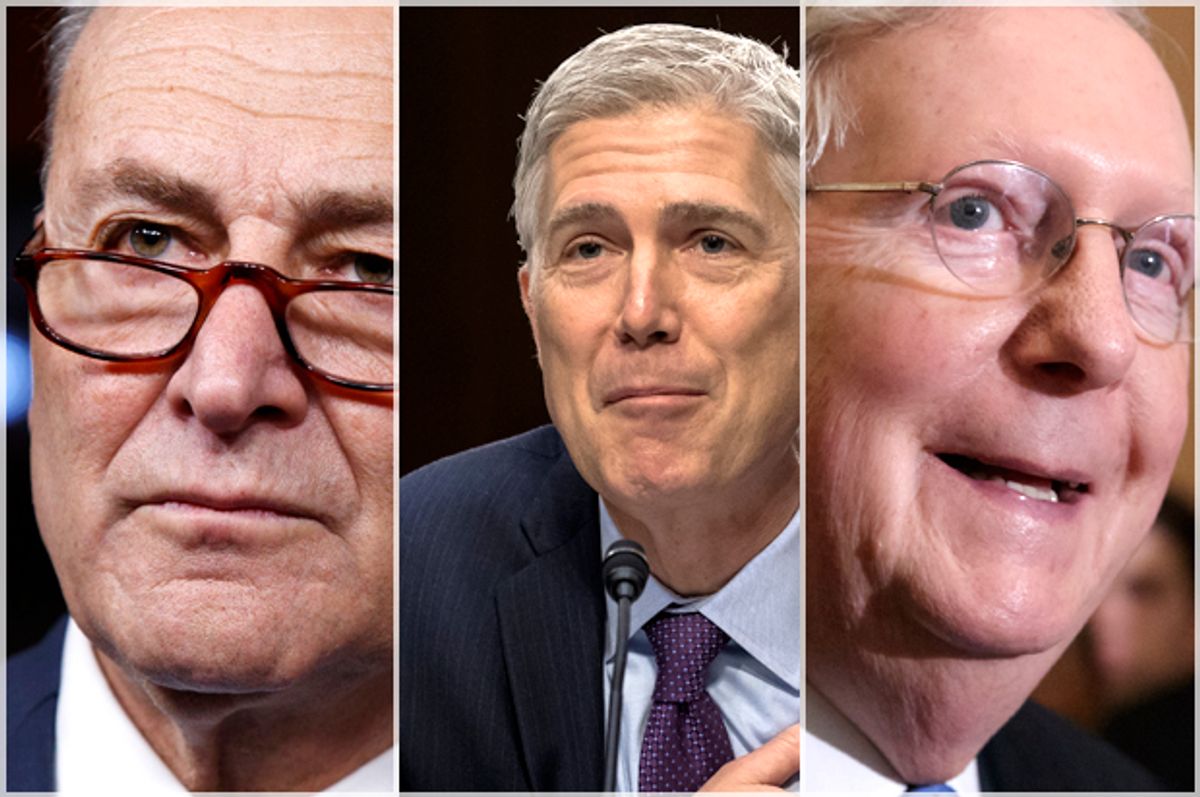 About two years ago, I wrote a piece for Salon warning that Donald Trump’s erratic behavior and unstable temperament could rapidly destabilize our politics, if not the functioning of government at various levels. It was clear to anyone who had paid attention to Trump’s behavior, including his 2011 treasure hunt in Hawaii for President Barack Obama’s birth certificate, that he had little regard for facts, decorum and especially the traditions that tenuously bind our system together.

Too many voters and politicians alike refuse to fully realize that it’s not our laws or Constitution alone that preserve the integrity of our system in the face of staggering odds. Through a devastating civil war, a great depression and two world wars, the traditions of American-style democracy have turned out to be the mortar between the bricks — and it’s only due to leaders who have respected and honored those traditions, despite the greatest episodes of adversity to have faced a young nation.

The best and most memorable example of a tradition that, had it been ignored, could have wrecked the whole thing was George Washington's resigning his commission in order to establish the presidency as a civilian office, uncorrupted by warriors seeking armed conflict. Without that tradition, without Washington’s historic precedent, it’s possible we could have ended up with a series of generalissimos — militaristic despots not unlike many of the strongmen in the developing world of recent decades.

Trump’s loyalists wonder why we were alarmed to hear that Trump wanted to see tanks and rocket launchers in what ended up being his sparsely attended inaugural parade. Thankfully, the system is stacked against such requests, but for how much longer? The request is out there. What happens when we get another incoming president who won’t take “no” for an answer on a stunt like this? Some have speculated that it’s only a matter of time before Trump begins to festoon himself with military regalia.

Short of that, just about everything Trump’s doing right now — from his obnoxious Twitter trolling to his deeply offensive budget proposal in which he’s attempting to “deconstruct the administrative state” — constitutes ongoing damage to the traditions of the office. The next president, should he or she possess a similar lack of presidential discipline and deference, will surely take advantage of Trump’s disruption of the executive branch, repeating many of his awful choices. This is how precedent works.

After all, we’re letting Trump get away with it. Next time, not unlike what happens with a second-born sibling, it’ll be easier for President X to repeat Trump’s more horrendous actions, such as accusing the previous president of illegally wiretapping his office or accusing 3 million undocumented immigrants of voting in the presidential election.

This brings us to Senate Majority Leader Mitch McConnell and a potential filibuster of Neil Gorsuch’s nomination to the Supreme Court.

Like Trump, the McConnell-era congressional Republicans abandoned tradition a long time ago, starting with the intentional sabotaging of the Obama presidency from Day One. Beginning with his pledge to make Obama a one-term president (good job, Mitch) and ending with his refusal, for the first time ever, to hold hearings and a vote on Obama’s nominee to replace the late Antonin Scalia, McConnell tossed aside senatorial traditions and decorum in exchange for political expedience. And now, a year after stonewalling the nomination of squeaky-clean moderate Merrick Garland, McConnell faces the repercussions of exploding the process.

As of this writing, the Senate Democrats have managed to whip 41 votes against cloture, successfully creating a filibuster of the Gorsuch nomination. Naturally, the current filibuster of Gorsuch is mainly in retaliation for McConnell’s obstructionism last year. I’d also like to think it’s because Gorsuch was nominated by a president with deeply treasonous, deeply criminal, impeachment-worthy links to Russian oligarchs and the hostile Putin-led Kremlin. Regardless, the filibuster is comeuppance for McConnell’s tradition-shattering grabassery on the Garland nomination. In the face of a potential left-leaning court, McConnell and the GOP caucus chose to establish a new precedent — no Supreme Court nominees will be confirmed in the final year of a presidency— rather than biding their time and enjoying a counter-victory at some point in the future, when the next seat becomes available.

Unless McConnell kills the filibuster — which he’s expected to do — his actions last year related to the Garland fracas could easily touch off a gradual dwindling of the power of the Supreme Court. Literally. As the current justices resign or pass on, Congress could very well continue to sidestep the confirmation of replacement justices until the court is rendered ineffective due to a lack of justices. It’s conceivable that we’ll never get a replacement for Scalia. Likewise, it’s also possible that we won’t get a replacement for the next vacating justice, and so on and so on.

Why? Because McConnell established a new precedent for confirming (or not) Supreme Court nominees. And now he plans to worsen the impact of last year’s Garland fiasco by invoking the "nuclear option" and killing the filibuster.

This is how democracy slowly suffocates — by the deeds of power-hungry leaders whose only allegiance is to political expedience, rather than doing what’s right, what’s legal and what tradition demands. I can assure you that when a future Democratic president nominates a progressive justice and has just enough votes to confirm that nominee, Republicans will crave a return to the filibuster. It will be too late.