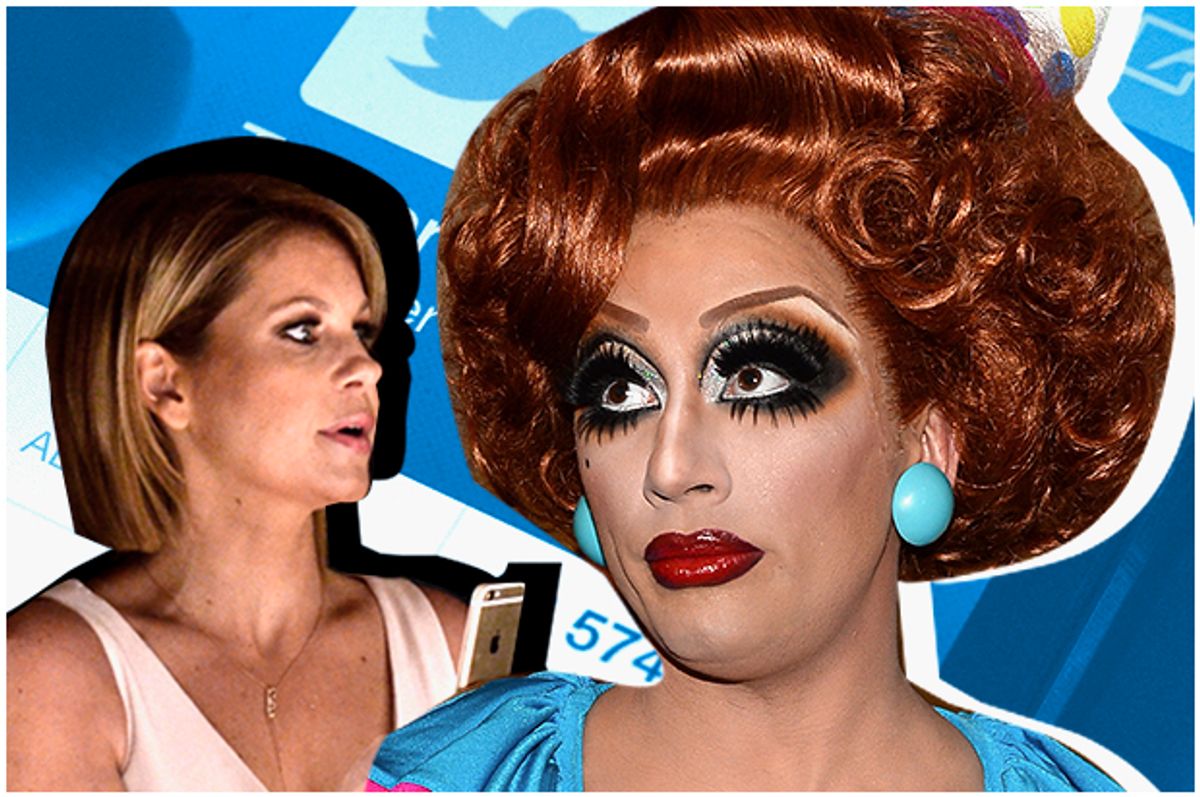 Just when you needed a distraction from the imploding garbage fire that is the Trump presidency, a feud between a drag queen and a conservative ‘90s sitcom star has come along to answer your prayers.

Last week, “Full House” star Candace Cameron-Bure posted a photo of herself to Instagram wearing a T-shirt reading “Not Today Satan.” What Cameron-Bure, an outspoken conservative who opposes same-sex marriage, didn’t realize is that the catchphrase originates from VH1’s popular “RuPaul’s Drag Race” reality show competition. Although the saying long predates the program, insult comic queen Bianca Del Rio (née Roy Haylock) popularized the phrase en route her win in the show’s sixth season. On Del Rio’s website, you can buy your own “Not Today Satan” hat for the low price of $29.95 (plus shipping and handling).

Because you can’t snatch someone’s wig online, Del Rio fired back at Cameron-Bure on social media. “If only this homophobic Republican knew,” the 41-year-old commented on Instagram. The former child star took issue with the characterization that her Christian views make her a bigot, responding in her own Instagram post: “Loving Jesus doesn’t mean I hate gay people or anyone.”

What Cameron-Bure doesn’t seem to grasp is that you don’t have to be the mutant reincarnation of Fred Phelps to espouse beliefs that are deeply detrimental to queer and transgender people’s lives. Del Rio, a notable figure in the LGBT community, has every right to encourage someone who has spent her entire career opposing the rights of that very community not to rock her merchandise. Prior to accepting a gig as a co-host on “The View” (which we’ll get to in a minute), Cameron-Bure posted a Instagram photo of herself proudly eating Chik-fil-A in 2012 after the fast-food chain was called out for donating to anti-LGBT hate groups.

The logic here is pretty simple: You don’t get a free pass to support bigotry and then participate in the parts of LGBT community you like. Some might label it appropriation, and I’m sure there’s an argument to be made. But in my opinion, cherry-picking from gay culture just to scrounge up a few likes on social media just makes you an inconsiderate jackass.

What’s doubly ironic about the situation, though, is that Cameron-Bure made her name on defending the right of Christians to discriminate against LGBT people in the name of their beliefs.

Cameron-Bure is the sister of televangelist Kirk Cameron, who believes that homosexuality is “detrimental” and “ultimately destructive to so many of the foundations of civilization.” His younger sibling has asserted that she does not share the former “Growing Pains” star’s views, claiming that she has “gay friends.” But there’s no way that gaggle of friends could have been particularly pleased with her first guest spot on “The View,” in which Cameron-Bure butted heads with Raven-Symoné over whether an Oregon bakery should have the right not to bake a cake for a lesbian couple’s wedding.

Filling in for co-host Rosie Perez on July 7, 2015, the ladies discussed Sweet Cakes by Melissa, whose owners had recently been fined $136,927 after they were found in violation of Oregon’s nondiscrimination laws. Laurel and Rachel Bowman-Cryer claimed that two years prior, the bakery refused them service for being LGBT. The Beaver State is one of just 22 states that prohibits discrimination on the basis of sexual orientation and gender identity in all public accommodations.

But Cameron-Bure argued that there was an important distinction: The Bowman-Cryers weren’t denied a cake because they’re lesbians. The refusal was due to the owners’ religious beliefs, which she claims are protected under the First Amendment of the Constitution.

“I don’t think this is discrimination at all,” Cameron-Bure claimed. “This is about freedom of association. . . . We do have the right to still choose who we associate with.”

This is an issue that will likely be decided by future Supreme Court cases, but Cameron-Bure appears to harbor a misunderstanding of whose rights the Constitution actually protects in these situations. Although she is correct that the Bill of Rights uphold both the free exercise of religion and freedom of speech, those protections stop at offering sweeping exemptions based on one’s personal religious beliefs. While the government cannot tell the Kleins — the Christian couple who owned Sweet Cakes by Melissa — where or how to worship, freedom of action is not constitutionally protected. That doesn’t exist.

Although the Supreme Court has not yet weighed in about religious objections to its 2015 ruling on same-sex marriage, SCOTUS has in the past sided against allowing religious people to be exempt from laws they don’t like.

In the cumbersomely titled Employment Division, Department of Human Resources of Oregon v. Smith, the court’s highest bench ruled against Native American tribes who felt that state prohibitions on peyote violated their right to practice their faith openly. Peyote, an hallucinogen which originates from the cactus plant, is frequently used in Native rituals. It’s also illegal in Oregon, like many other states. Although the Supreme Court stopped short of saying that states could never accommodate people of faith by allowing them to violate the law, the court ruled in a 6-3 decision that Oregon was not mandated to do so under the Constitution.

And before the Republicans in the audience kvetch about activist judges, it was the uber-conservative Justice Scalia who wrote the majority opinion in that case.

Because this was the show that has given anti-vaxxers and rape apologists a platform, Cameron-Bure bankrolled her incorrect interpretation of LGBT rights into a surprisingly lucrative career. The viral attention over her spat with Raven-Symoné got the 40-year-old a full-time co-hosting gig on “The View,” which she abdicated in 2016 to star in a series of Hallmark Channel movies. In addition to reprising the role of D.J. Tanner in Netflix’s “Fuller House” reboot, Cameron-Bure has appeared in five “Aurora Teagarden” movies for Hallmark. The last one premiered in March.

But if Cameron-Bure takes anything away from getting in yet another public feud, it should be what it’s really like to walk a mile in someone else’s heels. It’s pretty rich that someone who claimed it’s OK to discriminate against other people because of who they are has a problem with someone saying she shouldn’t wear their T-shirt because of who she is.

I’m sure it sucks to be called out for something as seemingly silly as a T-shirt. But Ms. Cameron-Bure, I assure you it’s a lot better than being turned away because of who you love.