The president is going to have to donate 20,000 paychecks to make up for the damage he's doing to the budget 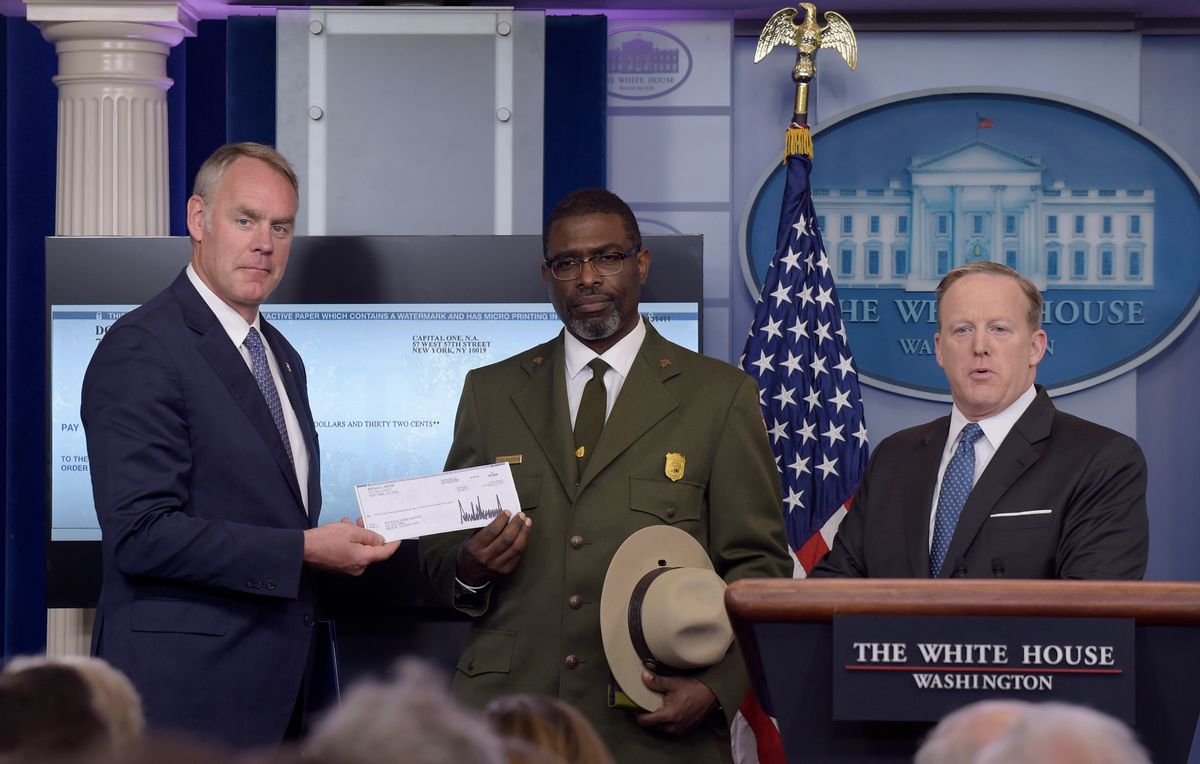 On Monday, Donald Trump donated his quarterly pay check to the National Park Service. It was a noble act, but it wasn't his only act when it came to the NPS.

In order for the president to make up for his proposed $1.6 billion budget cuts to the Interior Department, which will almost certainly hinder the everyday "maintenance of national parks and historic sites," he would need to donate roughly his next 20,425 paychecks, which would mean he would need to reside in the Oval Office for the next 5,100 years or so.

To put some of this in context, the proposed budget 12 percent cuts to the Interior Department stand to eliminate funding for 49 National Heritage Areas. It would also substantially decrease funding for public land acquisition offices.

Press Secretary Sean Spicer made the announcement Monday afternoon, as he handed the tangible check to Trump Interior Secretary Ryan Zinke and a National Park Service officer. Spicer was then faced with questions about Trump's weekend habits, such as his visits to his resort at Mar-a-Lago. According to ThinkProgress, Trump has spent seven of his weekends at the resort in Florida since being sworn in. It has cost taxpayers roughly $3 million per trip.

“This is a day the president just donated a significant amount of money of his salary to the federal government. So respectfully, it’s  —  at what point does he do enough?” Spicer asked during Monday’s briefing. “I think to be able to say  —  he isn’t taking a salary, he’s stepped down from his business, he’s walked away from a lot. I think — at some point he’s done quite a bit in terms of making a donation to the government," Spicer said.

Although, Trump hasn't taken any transparent steps to remove himself from his business, according to ThinkProgress. His sons have taken over, but the president still seems to be in the picture.

He has handed day-to-day management of his vast empire to his sons; however, profits from the business are funneled into a revocable trust that he can access at any time. Eric Trump, one of his father’s trustees and managers of his business, told Forbes that he might give his father profitability reports as often as every quarter, directly contradicting any illusion of separation.

While Trump's gesture to donate his a portion of his government-issued salary is kind at face value, broader context is needed for one to realize how infinitesimal of an impact it will make when taking a look at the big picture.