Gorka-pedia: Donald Trump's counter-terrorism adviser may have tried to edit his Wikipedia page 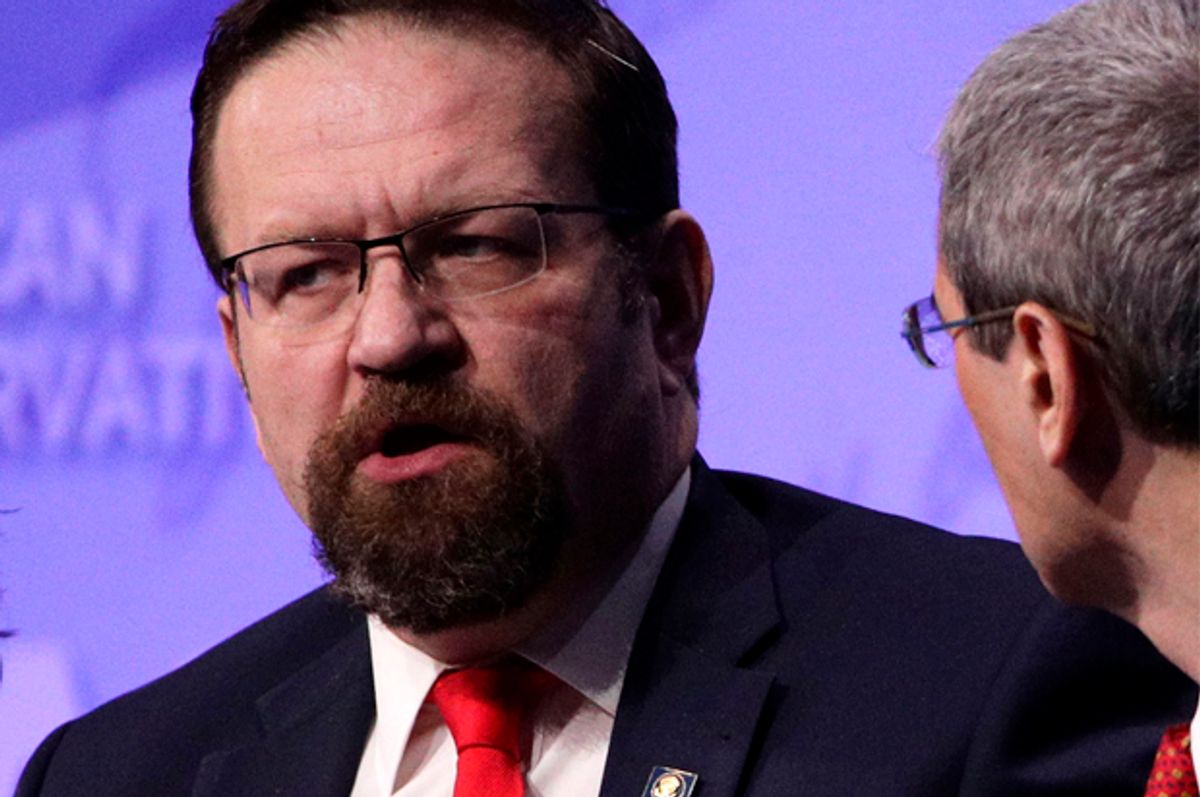 Tuesday has not been a good news day for Sebastian Gorka, who currently serves as chief counter-terrorism adviser to President Donald Trump. First a video surfaced showing Gorka defending a violent anti-Semitic militia in Hungary during an interview in 2007. Now he is being accused of editing his own Wikipedia page, despite that site's clear prohibition of alterations from users who have conflicts of interest.

Gorka's Wikipedia page was significantly revised by someone named "Sk-Gorka" and is currently the subject of thorough and ferocious dispute within the Wikipedia community, according to a report by CNN. While there is no evidence that "Sk-Gorka" is in fact Sebastian Gorka, the edits made to Sebastian Gorka's Wikipedia profile were oriented toward making Gorka look better ("Sk-Gorka" also created a profile for Gorka's wife, Katharine Gorka). This included beefing up the sections about Gorka's various speeches and books and incorporating Gorka's side of the story to a section about Gorka being charged with bringing a handgun through security at Washington National Airport in January 2016.

Although one Wikipedia editor flagged the article in August for a potential infraction of the site's rules about conflicts of interest, that didn't stop "Sk-Gorka" from editing the handgun incident in November, including taking it out of the introduction and moving it to the bottom of the page. That section has now been entirely removed, although it is not evident who was responsible for doing so.

Gorka's Wikipedia page currently includes a bar at the top saying, "The neutrality of this article is disputed." Within the "talk" section of that article, other users who have seemed peculiarly obsessed with making Gorka look good have been accused of being sock puppet accounts for the original "Sk-Gorka." One user, known as Grayfell, even warned one of the alleged sock puppet users, "@2250yset: I'm going to go out on a limb and say you're the same editor as Ccherzog, is that right? Judging by the past history of very promotional editing here, I'm also willing to bet that you're Sk-gorka."

The user denied being Ccherzog or Sk-Gorka but added a complaint that could have come directly from a Trump official's lips:

"I understand the 'edit war' going on is not productive but how does one stop someone from unfairly trying to defame a subject on Wikipedia, especially in light of the contentious elections?"