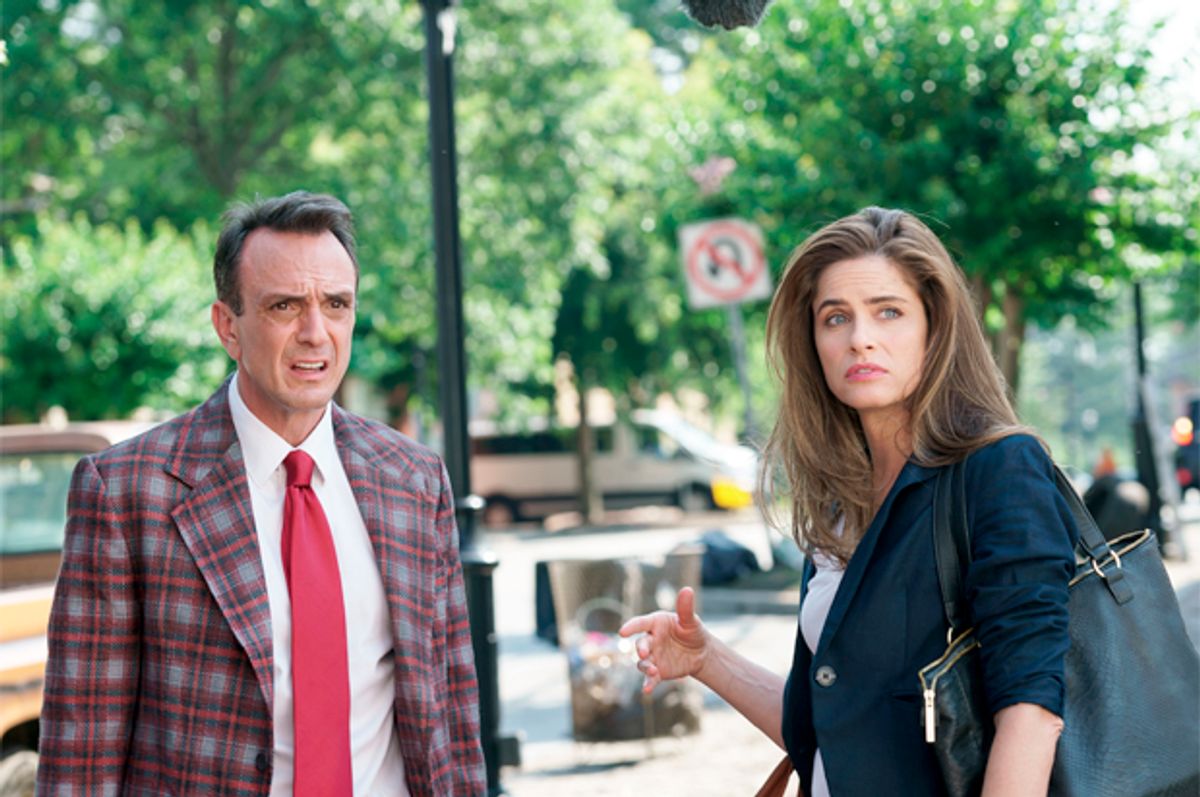 Cable's IFC sent the entire freshman season of its new comedy “Brockmire” to critics prior to the season's premiere. That's standard network publicity strategy these days, but in this case it was also an act of kindness. The network must have suspected that once some of us started watching the show, we wouldn’t be able to stop.

Minus commercials, the entire freshman season of “Brockmire” can be consumed in less than three hours, and it goes down all too easily, like bourbon punch on a leisurely summer day. Each episode provides everything you would want from a comedy: originality, elegantly crude humor, genuine warmth and heartbreak. There’s even one that grasps a hot button and plays it for comedy in a way that’s audacious, irreverent and honest without relinquishing any of the story’s screwball tone.

The comedy’s serialized plot arcs flawlessly from the premiere to finale, and the redemption story at its center steadily builds and resolves in a way that feels complete while leaving the door open for a second season that it definitively has earned. (IFC has yet to clear the series for a second season, but it should.)

In fact, the only thing wrong with “Brockmire,” premiering Wednesday at 10 p.m., is that its first season is only eight episodes long. At a time when some TV producers equate “prestige” product with cranking out episodes that can be as long as feature films, one would think brevity would an asset.

Yet after taking in every available chapter of Jim Brockmire’s hysterical, rude, tragic tale, I was upset that there weren’t more. And I suspect the fortunate few who have every episode of “Brockmire” will watch them again and again. I’ve viewed the entire season three times already. This is a miracle, especially considering that this is a series grounded in a love of baseball, a game that holds little interest for me.

Redemption stories are another matter. I’m no fan of America's favorite sport, but I love “The Bad News Bears.” I don’t know much about the lore of sportscasting, but do have a soft spot for losers fighting their way back into the spotlight. Any gut-busting comedy about broken things and blowhards is a diversion I’ll make time for. That’s “Brockmire” in a nutshell.

Hank Azaria stars as the fallen baseball play-by-play announcer Jim Brockmire, a character he originated in a Funny or Die video. As a part of a parody series called “Gamechangers,” the video was a celebratory profile featuring interviews with real-life sportscasters Dan Patrick, Joe Buck and Rich Eisen, who all speak with awe and respect about Brockmire’s entirely fictional, victorious career as Kansas City’s favorite son and the agony of his eventual life defeat.

Azaria's character is an amalgam and caricature of old-school color commentators, men who hold a place in the athletic firmament beside professional athletes. Toss Marv Albert, Howard Cosell and Harry Caray in a genetic blender, and Jim Brockmire would be the guy that would pour out. Brockmire speaks in melodic tones that dance between folksy and grandiloquent. And he does this all the time — even during sexual intercourse.

When Brockmire was at the top of his game, he was beloved for his flowery descriptions of the action on the diamond. He was cocksure and tackily dressed in a plaid blazer, red tie and a carnation pinned to his lapel; Brockmire's flame burned a little too brightly. Catching his beloved wife Lucy in an adulterous act is all it took for him to completely lose his marbles mid-broadcast in a rye-fueled rant during the bottom of the eighth inning.

His explosive breakdown in 2007, including a description of strap-ons directed at younger listeners, is one for the ages — especially the internet age.

“Brockmire” picks up a decade later as the faded legend lands in Morristown, Pennsylvania, a small burg gutted by the natural gas industry. Jules (Amanda Peet), owner of its resident minor league outfit, the Frackers, hires Brockmire to be the team’s announcer. Brockmire has spent the intervening years hoovering drugs, swimming in alcohol, calling cockfights and conducting a world tour of brothels. He believes he can’t possibly sink any lower.

That’s before the Frackers’ social-media guru Charles (Tyrel Jackson Williams) informs Brockmire that his broadcast breakdown went viral, and “keeping it Brockmire” has become an internet meme and a way of life.

Charles urges Brockmire to create more shareable content, which doesn’t take much coaching since the man calls each Frackers game with a blend of drunken disdain and nihilistic lyricism that would make Charles Bukowski tear up with pride. Though Azaria makes executive producer Joel Church-Cooper’s profanity-laced dialogue shine like a crazy diamond when Brockmire is in the booth, his level delivery in quieter scenes earn the character a share of absolution.

Church-Cooper writes this character with ample affection, and he and Azaria never allow the viewer to question the character’s innate goodness. This leaves us free to take unbridled joy in the dark humor that Brockmire casually tosses around, knowing that it’s stitched together from shreds of his broken spirit.

Peet’s Jules is an optimist determined to save her town through the magic of baseball, and one who doesn’t apologize for her love of the game or the functional alcoholism that Azaria’s character finds so alluring. The entire team is populated by misfits either chasing major league dreams or making the best of the remnants of their waning careers — or, in the case of Hemky Madera’s former major league player Pedro Uribe, trading what’s left of his fame to party hard and knock up an assortment of women.

Azaria is mainly known as a comic actor, but he's done impressive dramatic work as well, and you can see that skill in the tiny tweaks of agony betrayed in Brockmire's facial expressions during the show's more painful moments.

His ability to hold the character’s pathos close to the vest while reveling in his debauchery creates a bizarre kind of magic that matches well with Peet’s sincere, inebriated determination to raise her town out of the dumps. Williams, though, is the comedy’s secret weapon who lets Charles counterbalance Jules’ and Brockmire’s romantic obsession with baseball with a millennial’s sense of disconnection and wonder at the weirdness and dysfunction swirling around him.

“Brockmire” may celebrate the art of spiraling downward and the hard climb back out of the pit, but it does so in a way that isn’t overly reflective or worshipful of the lessons taught by the tumble or the ascent. Riotous as it can be, it’s also a breathtaking and soulful show about shattered beings worth rooting for. Fortunately IFC is airing the first two episodes of “Brockmire” back-to-back this week, then pitching one segment at a time after that. Fall in love with this show, and none of it will be enough.