It could get worse than Trumpcare: Republicans revive health care bill only to gut overwhelmingly popular reforms 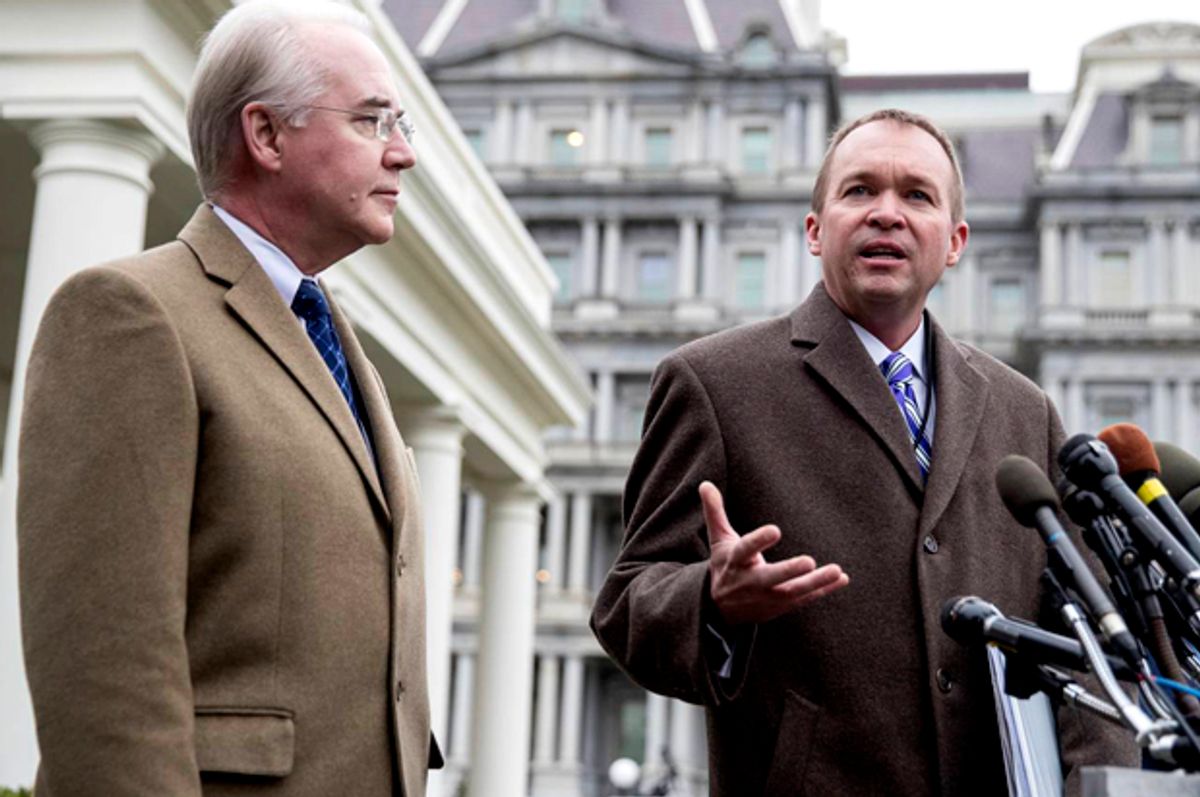 President Donald Trump and the Republicans in Congress apparently aren’t content with just one embarrassing face-plant on health care, so they’re setting themselves up for round 2. The dramatic collapse of the American Health Care Act resulted from deep ideological divisions within the Republican-controlled Congress that imperil pretty much every facet of the White House’s domestic legislative agenda. Step 1 to getting anything else done is for Republicans to find a way to “yes” on a health care bill. But the latest proposal emerging from the House GOP is a still worse policy that will likely be even less viable politically than the AHCA.

As The Washington Post has reported, the new idea emanating from Republican negotiators is to allow states the choice of opting out of specific regulations imposed by the Affordable Care Act: for instance, the requirement that health plans cover essential health benefits; and “a provision that bars insurers from charging the sick more than the healthy,” known commonly as community rating. Both of these changes are meant to secure more votes from the recalcitrant right-wingers in the House Freedom Caucus, and the fact that Republican leaders are going down this route is a good sign of how desperate they are to get something passed.

The initial versions of the American Health Care Act quite conspicuously left in place the ACA’s protections for people with pre-existing conditions. This was done for reasons that were both political and procedural, which we’ll get into in a moment. By giving states the freedom to ditch community rating, Republicans would be undermining those protections for sick people.

As Margot Sanger-Katz wrote in The New York Times, insurers would still be required to sell insurance to sick people under this proposal, but they “would be free to charge those patients as much as they wanted.” When combined with the elimination of essential health benefits, Republicans' repeal of the community rating provision could leave people with pre-existing conditions facing a situation in which they’ll be charged substantially more for health coverage that doesn’t actually cover anything. It’s terrible policy: injuring the people who need the most help in order to bring down insurance costs for healthy people.

As you might anticipate, such a change would not sit well with the public. While the Affordable Care Act’s popularity is middling, the law’s protections for people with pre-existing conditions are extremely well-liked. A November poll from the Kaiser Family Foundation found that 69 percent of the respondents approvded of the ACA’s provisions on pre-existing conditions. It also found that “among those who want the law repealed, 38 percent (or 10% of the public overall) change their opinion after hearing the argument that repealing the ACA would mean that insurance companies could deny coverage to people with pre-existing conditions.”

If Republicans in Congress take aim at this exceedingly popular provision, that should help to foster still deeper loathing for their already extremely unpopular health care legislation. And even if those changes succeed in peeling off a few Freedom Caucus defectors, they’ll likely alienate more moderate Republicans who are squeamish about voting to make health care even less affordable for sick people.

But let’s say that these regulatory changes, by some strange political alchemy, somehow result in a piece of legislation making it through the House of Representatives. Hard part’s over, right? Alas, no.

The other reason Republican leaders initially left the pre-existing conditions protections in place is that they want to pass a bill that won’t fall victim to a Democratic filibuster in the Senate. To do that, the legislation has to align with the Senate’s rules for passing a bill under a process that’s known as budget reconciliation. As The Washington Post's Greg Sargent has noted, regulatory changes of this sort would very likely run afoul of those rules. It is within the power of the Senate Republican majority to just override those rules and jam the bill through anyway. But, again, we’re talking about an already unpopular legislative push that will have even less support once they decide to gut the ACA’s provisions on pre-existing conditions.

What see here are the irreconcilable tensions within the GOP manifesting themselves in ways that contribute to legislative gridlock. Republicans ran hard for several years on a promise to repeal and replace the Affordable Care Act, but they deferred the thorny question of how they would do that until it was too late. Now they’re under massive pressure to pass a bill — but to get there they have to satisfy a competing and contradictory set of ideological and political agendas while simultaneously navigating an exotic procedural road map.

And this is still just the first step of broader Republican legislative agenda under President Trump. Most of the other things the GOP hopes to accomplish ride on passing a health care bill first, and that desperation is impelling Republican leaders to make terrible political and policy choices.