The democratic leader of a U.S. ally isn't worth Trump's time — but he adores the guy who staged a military coup 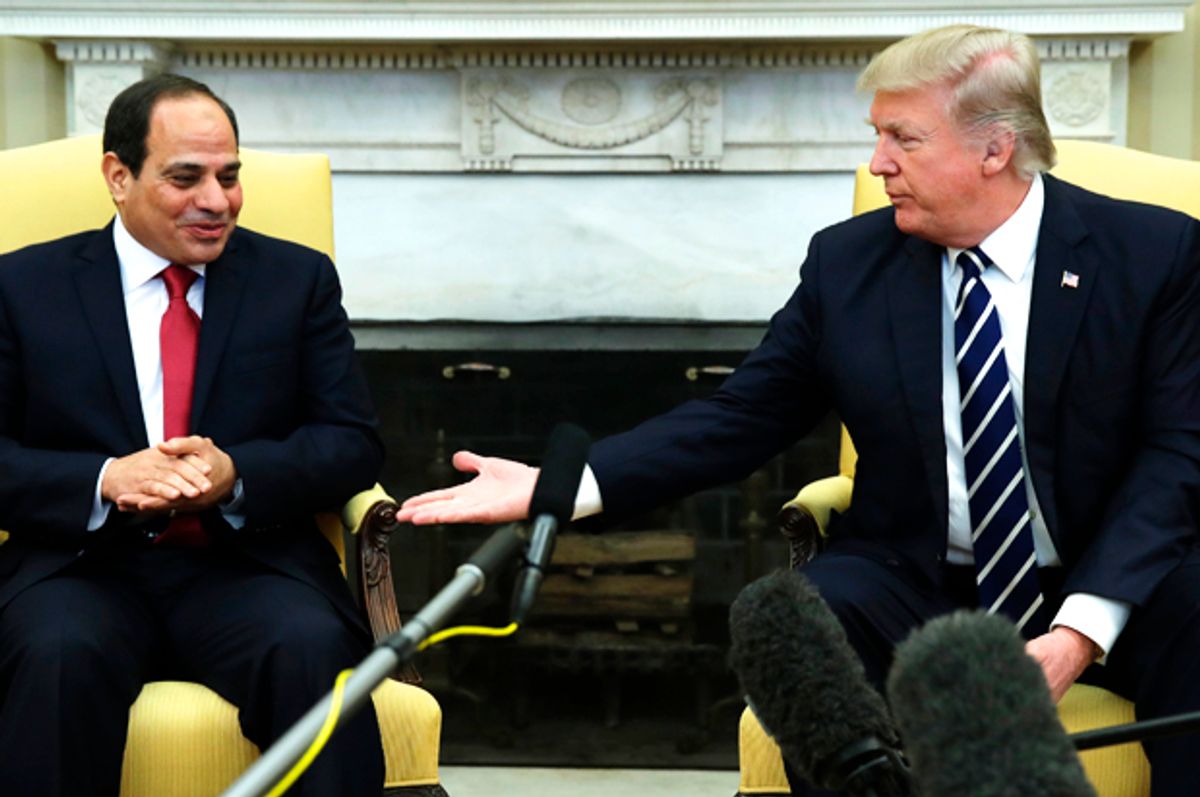 Whenever I hear someone on the cable gabfests say that President Trump is an isolationist, I have to wonder if they've ever actually listened to anything the man says. It's true that he has claimed to have been against military action in Iraq and Libya, despite all evidence to the contrary. And yes, he uses an archaic isolationist slogan "America first." But he is not an isolationist.

He doesn't care about human rights, as do the liberal interventionists, nor does he share the neoconservative obsession with expanding democracy and capitalism around the world. He does share things in common with the so-called realist school, in that the "national interest" comes first. But Trump's crude definition of the national interest seems to be "might makes right" and "to the victors go the spoils," so his level of sophistication in these matters is not very high.

Trump is, as I wrote for Salon earlier, an old-fashioned imperialist. He's willing to make temporary alliances as long as they serve his needs. But he has no interest in maintaining the post-World War II global order except to the extent it makes it possible for the U.S. to do as it chooses, unencumbered by international norms and laws and limited only by its military capability to enforce its will.

Indeed, this same philosophy can be applied to how he sees domestic affairs as well. He has no pretensions about caring for the Constitution and probably couldn't name the first three presidents or what's in the First Amendment if you paid him. He is an authoritarian to his core, as far back as 1980s and his famous cri de coeur in the Central Park Five case, his newspaper ad headlined "Bring Back The Death Penalty. Bring Back Our Police!"

Perhaps the best illustration of his authoritarian nationalist worldview is a request he made before the inauguration, with no recognition that he was expressing something fundamentally un-American:

He had wanted the military to provide tanks and missile launchers for his inauguration parade and was apparently talked out of it, much to the relief of the the Pentagon. According to The Huffington Post, an inauguration planner said, "they were legit thinking Red Square/North Korea-style parade." No marching bands and elderly VFW troops for Donald Trump! He wants to show off the hardware and see miles of troops parading smartly before him.

This was not surprising since Trump has had nothing but admiration for the dictatorial styles of chauvinist world leaders, notably of Russian President Vladimir Putin. But he has also sung the praises of North Korea's youthful Kim Jong Un and was impressed by the Chinese government's "strong" response to the Tiananmen Square protests.

He hasn't yet had a chance to start the war he clearly wants to start, but we can see the contours of his thinking by the way he's behaved in state visits by foreign leaders. When German Chancellor Angela Merkel came to the White House a couple of weeks ago, apparently Trump behaved like a petulant child, uninterested, distracted and totally unprepared.

Roger Cohen of The New York Times spoke with members of Merkel's delegation and was told that Trump "raged about the financial killing China was making from last year’s Paris climate accord and kept 'frequently and brutally changing the subject when not interested, which was the case with the European Union.'”

According to Cohen's sources:

Trump knew nothing of the proposed European-American deal known as the Trans-Atlantic Trade and Investment Partnership, little about Russian aggression in Ukraine or the Minsk agreements, and was so scatterbrained that German officials concluded that the president’s daughter Ivanka, who had no formal reason to be there, was the more prepared and helpful.

Judging by the awkward dual press conference and the mortifying photo op when he refused to shake her hand, one cannot help but suspect that Trump doesn't think Merkel "looks like a president," as he used to say often about his female rivals Carly Fiorina and Hillary Clinton during the presidential campaign. His behavior toward one of America's most important allies was obnoxiously dismissive.

In stark contrast, his meeting with Egypt's Abdel-Fattah el-Sissi on Monday was a veritable lovefest. This was undoubtedly a welcome departure for the Egyptian president, who had not been invited to the White House before since he had seized office in a coup d'état, jailed journalists and political rivals and even ordered the killing of about 800 people on one day in August 2013.

As Middle East expert Steven A. Cook wrote in this piece for Salon in anticipation of the visit, Egypt has had autocratic leaders for a long time, but el-Sissi has taken it to an extreme:

No doubt there is an air of familiarity to Egyptian politics. [El-Sissi's] Egypt is a reflection of Mubarak’s Egypt, which was a reflection of Sadat’s Egypt, which was inherited from Gamal Abdel Nasser, who built the national security state in the 1950s and 1960s. Yet the combination of [his] violence, his crackdown on expression and the impoverishment of his people sets him apart.

Donald Trump undoubtedly admires el-Sissi for being "strong," but more civilized leaders would keep some respectful distance even if they were working for a rapprochement. His public embrace of the Egyptian despot has been way over the top:

We agree on so many things. I just want to let everybody know, in case there was any doubt, that we are very much behind President el-Sisi. He’s done a fantastic job in a very difficult situation. We are very much behind Egypt and the people of Egypt, and the United States has, believe me, backing and we have strong backing.

Of course his most enthusiastic endorsement of any foreign leader since he assumed the White House would be of a tyrannical strongman. Why would anyone assume otherwise?

Trump refuses to prepare and study and instead relies on his puerile, schoolyard bully Weltanschauung and his crew of oddball advisers like Steve Bannon and Sebastian Gorka (an actual, real-life Nazi.) It's still early in the Trump administration but there is no sign that he has any interest in changing. One shudders to think what he will do when the nation faces a serious national security crisis.