Bernie and the blame game: Accusing the progressive left of thought crimes is no way to rebuild the Democratic Party 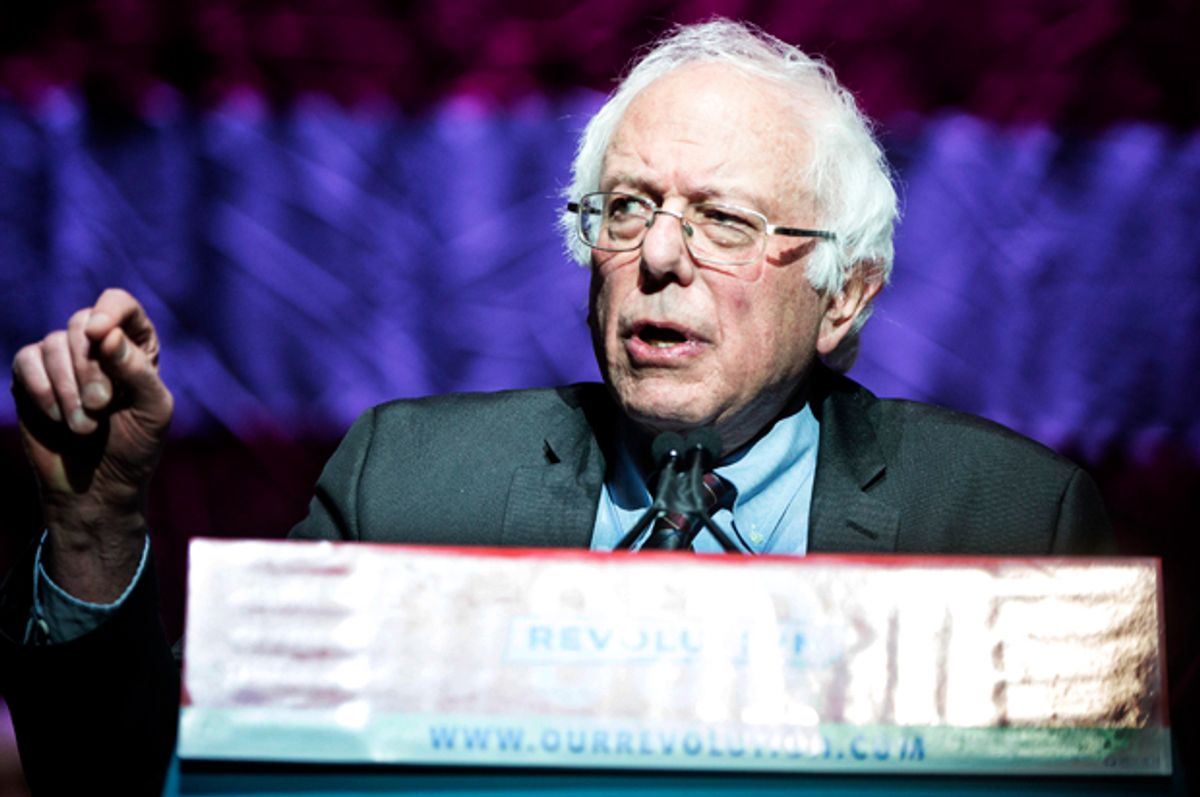 During his speech last Friday at the Our Revolution rally in Boston, Sen. Bernie Sanders took a subtle jab at Hillary Clinton and her failed presidential campaign when he rejected the wholesale condemnation of Trump voters as “deplorable.”

“Some people think the people who voted for Trump are racists and sexists and homophobes and deplorable folks," he said. "I don’t agree, because I’ve been there,” said the Vermont senator, who then suggested that “it wasn’t that Donald Trump won the election, [but] that the Democratic Party lost the election.”

This was consistent with Sanders’ underlying message since last November’s election — namely, that the Democratic Party should return to having a more populist style of politics and espouse a social democratic agenda to address growing economic inequality and help working- and middle-class Americans. This plea has been met with skepticism and even hostility from a good number of liberals and centrist Democrats, who construe the popular senator’s fixation on confronting economic justice and corporate malfeasance as an indifference to  other crucial issues, including gay rights, criminal justice reform or protecting women’s reproductive rights.

It's not surprising then that many liberals interpreted the progressive senator’s latest comments as downplaying and even erasing the very real bigotry that continues to play a role in American politics and life. “Dear @BernieSanders You don't have to erase the deeply rooted pain of POC, Women, Muslims & LGBT in America to battle Wall Street. Do Better!” tweeted Clinton superfan James K. Holder (also known as  “Sir James the Second”), while another popular Twitter personality, Elliott Lusztig, opined, “I love Bernie Sanders but he's got to stop apologizing for the racism sexism & bigotry of Trump supporters. Enough.”

For the record, Lusztig does not actually “love” Sanders and has long directed his vitriol at the senator, and Holder suggested in February that Democratic National Committee chair candidate Keith Ellison — a black congressman who is a Muslim — was leading a “white takeover” of the DNC with Sanders.

The charge that Sanders is an apologist for the bigotry of Trump supporters (or even Trump himself), or that he is brushing aside social issues in favor of economic ones, has become increasingly popular in the liberal critique of not only Sanders but also the entire progressive left. These days, whenever leftists stress the importance of class or urge the Democratic Party to embrace a more radical economic agenda to confront historic levels of income and wealth inequality and appeal to working people, they inevitably face some unsavory accusations of defending or trivializing white supremacy, transphobia, sexism or xenophobia.

In fairness, Sanders could have worded his comment about Trump voters better; adding the word “all” would have sufficed. But it was clear that the senator was rejecting the fairly common belief among some liberals that everyone and anyone who voted for Trump over Clinton is deplorable and deserves nothing but contempt (saying, for example, “There’s no such thing as a good Trump voter”). While it is undeniable that a substantial number of those who voted for Trump are indeed “deplorable,” it is also undeniable that many who voted for Trump were either conned by his populist rhetoric and false promises, or thought he was slightly less horrid than Clinton.

In other words, there are Trump supporters and there are Trump voters. A Pew Research Center survey conducted shortly before the election, for example, suggested that a significant number of those planning to vote for Trump were really intending to cast a ballot against Clinton. And  2016 exit polls showed that of the 15 percent of voters surveyed who said that neither candidate was qualified to serve as president, about two-thirds voted for Trump. Of the 39 percent of voters polled who considered as most important the quality that the candidate “can bring needed change,” more than 80 percent cast ballots for the billionaire.

This leads us to the latter point made by Sanders, which is that Trump didn’t win because of a right-wing insurgency but because of the Democratic Party’s collapse and the widespread distrust of the status quo personified by Clinton. Trump’s victory came from just 80,000 votes spread across three Rust Belt states that the Clinton campaign had foolishly neglected. One could say that even though Trump was the most unpopular presidential candidate in modern history, the neoliberal establishment proved to be slightly more repellent to voters. Even more to the point, however, the Democratic collapse extends well beyond the 2016 presidential race. Over the past decade, Democrats have lost control of the Senate and the House and the majority of governorships and state legislatures.

Like Sanders, many on the left — including the current author — have argued that this collapse is the result of the party's straying too far from its populist roots while failing to advance a cogent and compelling message that would galvanize an electorate that overwhelmingly sympathizes with progressive goals. Even former Vice President Joe Biden — whom no one would call a leftist — offered a similar critique one day before Sanders:

What happened [in 2016] was that this was the first campaign that I can recall where my party did not talk about what it always stood for — and that was how to maintain a burgeoning middle class.

Of course, this is all hotly disputed by Clintonites, who maintain that the Clinton campaign adopted the “most progressive platform in Democratic Party history” and offered practical and comprehensive policy proposals — unlike her demagogue opponent. And there is certainly some truth to this argument — but only half the truth.

The Clinton campaign did adopt progressive policies to appease the Sanders campaign but didn’t do very much to advertise and promote these policies. Coupled with the campaign’s focus on outreach to Never Trump conservatives and Clinton's storied history of flip-flopping, that made it seem doubtful that the candidate really believed in progressive policies). A whopping $1 billion was spent on the campaign — roughly twice what the Trump campaign spent — yet only 25 percent of Clinton’s advertising spots went after Trump for policies, while the rest were personal. This is according to a recent study by the Wesleyan Media Project, which noted that Clinton devoted less advertising to policy — and spent more on personal attacks — than any candidates of the past four presidential elections, who all spent more than 40 percent of their ad dollars on policy.

“The Clinton campaign overwhelmingly chose to focus on Trump’s personality and fitness for office,” the researchers wrote, “leaving very little room for discussion in advertising of the reasons why Clinton herself was the better choice. Trump, on the other hand, provided explicit policy-based contrasts, highlighting his strengths and Clinton’s weaknesses.”

This was typical of the Clinton campaign, whose primary message could be summed up as the following: Trump and his fans are deplorable, and if you don’t vote for me, so are you.

Since the election the Democratic establishment has done its best to avoid taking responsibility for the disaster of 2016, blaming everything and everyone else — from Vladimir Putin and Russia to Jill Stein and James Comey to fake news and the “alt-left.” When progressives and leftists call out the Democratic Party they are often maliciously attacked — at best, called fake Democrats who should have no say in party affairs, at worst smeared as misogynists or white supremacist apologists or Russian puppets. Criticize Hillary Clinton and you are a sexist who doesn’t want a woman to be president; advocate class politics and you are dismissing the struggles of LGBT people and people of color. (The false dichotomy between class and identity politics has become increasingly prevalent.)

Criticize the hysteria over Russia — a scandal that is still based more on conjecture than concrete facts — and you are a Russian spy or one of Lenin’s Putin’s trolls.

The debate over the future of the Democratic Party will likely continue right until the 2020 election and beyond. No one can truly predict the state of American politics in four years time or further down the road. But as the 2016 election recedes further into the past, perhaps the debate can become more honest and less pervaded by bad faith.