Hypocrites for Gorsuch: Conservative activist group pushing Trump's nominee used to be for the filibuster

A right-wing group backing Gorsuch embraced the filibuster under Obama; today its members think this is an outrage 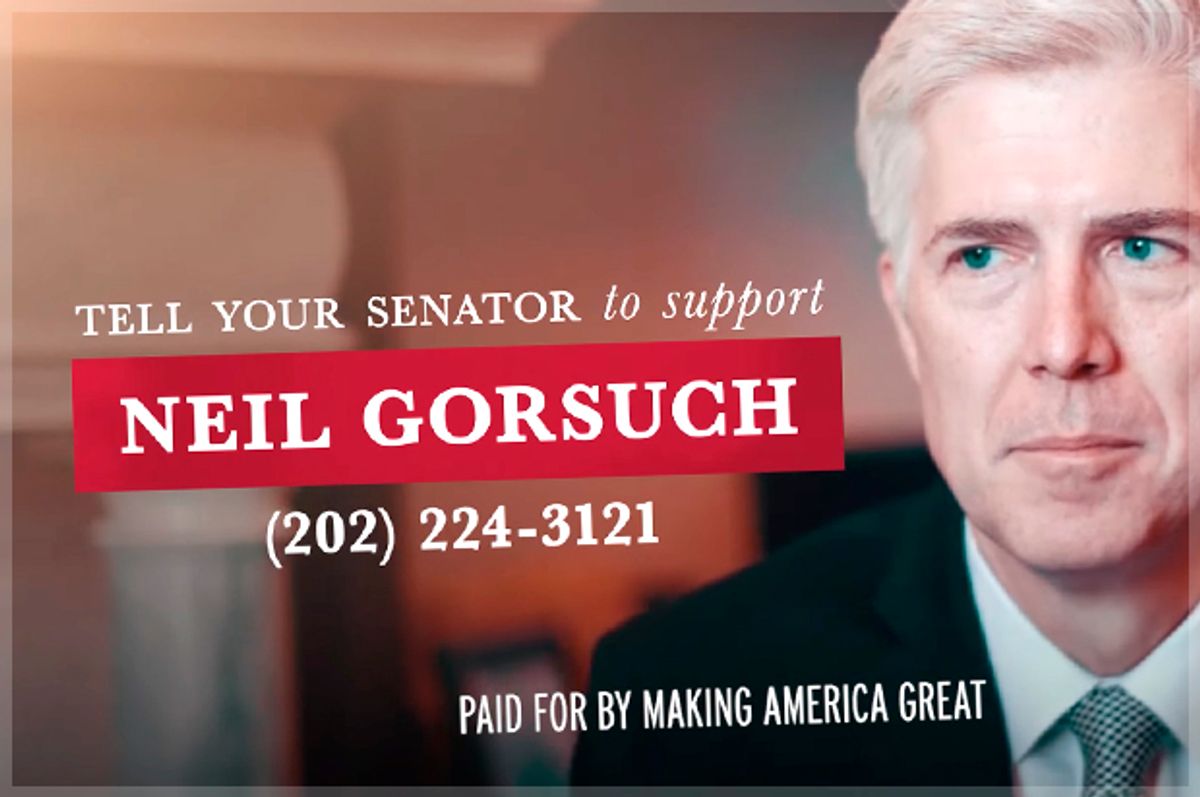 Carrie Severino, the chief counsel for the Judicial Crisis Network, denounced Senate Democrats to The Hill, accusing Senate Minority Leader Chuck Schumer of orchestrating a "campaign for endless gridlock" and calling on him to "end his gridlock campaign and honor the tradition of the Senate by giving Judge Neil Gorsuch a fair up or down vote."

In February Severino, whose organization claims to stand for a "a fair and impartial judiciary," wrote a blog post expressing similar thoughts, saying Schumer "has already embarrassed himself by attempting to rewrite history about the filibuster and invent a fictitious '60-vote standard' for the current nominee."

What a difference an election makes! Back in 2013, when former President Barack Obama was the one trying to appoint judges, Severino was an enormous fan of the 60-vote standard that requires a three-fifths majority for the Senate to end a filibuster so legislators can proceed to a vote on a judicial nominee.

“The 60-vote majority is there because we need to have both parties working together,” Severino told talk-show host Sandy Rios, justifying Republicans' using the filibuster to block Obama appointees. “You don’t want to do things by a bare majority vote all the time, and it is actually a benefit to get something that has a larger consensus."

This blatant about-face is important, because Judicial Crisis Network is a huge dark money player in the escalating right-wing war for domination of the judiciary. The group has long pushed this by-any-means-necessary strategy — including completely reversing its supposed core principles the second the White House changes party hands — for more than a decade, pushing the entire Republican Party to embrace hypocrisy and outright sleaze in pursuit of remaking the judiciary in its image.

This spring the Judicial Crisis Network has spent $1 million on an ad buy to pressure Democrats in swing states to not obstruct Gorsuch's confirmation.

"Carrie Severino was instrumental in making this" — stacking the judiciary with right-wingers, that is — "an issue in the conservative movement," said Brian Tashman, a senior research analyst at People For the American Way, in a phone conversation. "And this is a big deal because conservatives tend to vote more often on judicial nominees than liberal voters" when they are at the polls.

Even if conservatives didn't care for Donald Trump personally, they voted for him anyway, knowing "he’ll still appoint a right-wing justice to the Supreme Court," Tashman added.

The conservative network was founded in 2005 for the purpose of supporting George W. Bush in his attempts to appoint hard-right judges to the federal bench. Back then, the group's name was the Judicial Confirmation Network. It functioned as a spin-off from the conservative American Center for Law and Justice, founded by Pat Robertson to serve as the legal arm of the Christian right.

During Bush's term, the network held itself out as a principled opponent of the filibuster.

"JCN works to ensure that the confirmation process for all judicial nominees is fair and that every nominee sent to the full Senate receives an up or down vote," the website read during the Bush years.

One of the group's leaders at the time, Wendy Long, went so far as to say that it would oppose the filibuster "regardless of what party’s in power."

After Obama was elected in 2008, however, the organization's leaders changed the group's name to Judicial Crisis Network and proclaimed it a principled supporter of the filibuster, running ads attacking Democrats who voted to end the filibuster of Obama nominees.

And now that Trump is president, to be sure, the Judicial Crisis Network has seamlessly shifted back into expressing outrage at the very idea of a filibuster and returned to issuing demands for an up or down vote on his Supreme Court nominee.

The Judicial Crisis Network's actions are nakedly hypocritical. They are also effective.

“We really did see a lot of vacancies go unfilled" during the Obama years because of conservative activist groups like the Judicial Crisis Network, Tashman explained.

Under pressure from the Judicial Crisis Network and groups like it, Republicans launched an unprecedented war on Obama's right to appoint judges, leaving dozens of seats empty rather than letting a Democratic president fill them.

Said Tashman: “They were even prepared to let the Supreme Court go with no nominee if Clinton was elected" — a course of action Sen. Ted Cruz, among others, openly advocated.

This is no exaggeration. Severino really did say, “The court could really function as long as it needed to with eight justices," during a panel at the Value Voters Summit in September.

With Trump in office, Severino has taken to nicknaming Schumer "Gridlock Chuck," saying he is "willing to destroy every norm and tradition in the Senate" in order to keep a Trump appointee off the bench.

The fact that Senate Majority Leader Mitch McConnell's "rules" for judicial nominees completely change depending on the party of the nominating president is a direct result of the way activist groups like the  Judicial Crisis Network endorse duplicity as a political strategy. Because the Judicial Crisis Network has been so shameless in switching its supposed principles on a dime, that's made it much easier for political leaders like McConnell to do so, especially since there are no real consequences for such shameless behavior.

In fact, the brazen double-dealing has been lucrative for the Judicial Crisis Network, which is plugged into a broad and shadowy network of dark money donors that have increasingly set the agenda for the conservative movement and therefore the Republican Party.

As Viveca Novak and Peter Stone chronicled in a piece written jointly for The Daily Beast and the Center for Responsive Politics' Open Secrets, the Judicial Crisis Network has been lavishly funded by the Wellspring Committee, a dark money group founded by Charles and David Koch and run by conservative fundraiser Ann Corkery. (Corkery's husband, Neil Corkery, is the Judicial Crisis Network's treasurer.)

"From the beginning, Wellspring was set up as a dark-money conduit, effectively laundering billionaire donations so no one would have to be accountable for them," wrote Jay Michaelson in a separate piece for The Daily Beast.

"In 2015, the Wellspring Committee continued to bankroll JCN with more than $5.7 million, on top of nearly $7 million it gave the prior year to boost JCN’s spending in the 2014 midterms," Robert Maguire and Anna Massoglia of the Center for Responsive Politics reported in March.

Knowing that groups like the Judicial Crisis Network are channeling the desires of right-wing billionaires likely only enhances their influence over Republican politicians, who have enormous incentive to be well-liked by said billionaires. Staying in the good graces of wealthy conservative donors certainly matters more to the typical Republican politician than avoiding the sting of journalists who may point out their two-faced behavior.

But one thing is for certain: When one sees a Republican politician or conservative activist on TV, becoming all huffy with umbrage, claiming that their liberal opponents are not playing fair with the rules abouit the filibuster, it's nothing but empty political theater. When the White House switches parties again, that same person will be back on TV, making an outraged argument for precisely the opposite position.