Anger is an energy: The world’s best live band is made up of two middle-age British blokes in sweatpants

Name-checking British politicians and music scene posers, the Mods rap about alienation and aging in a modern world 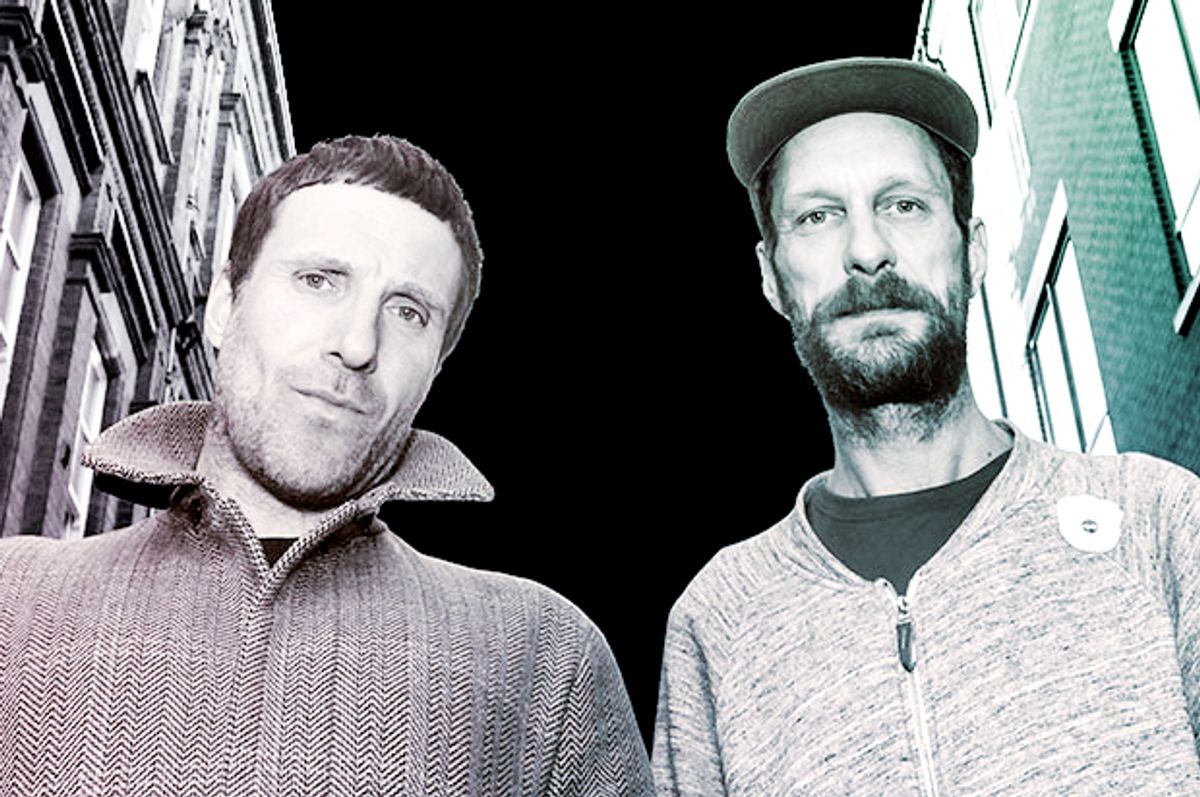 The best live act touring these days is two middle-aged British men in sweatpants. It sounds like a joke. But it’s true.

Sleaford Mods, a Nottingham, England-based rap-punk-whatever-they-are duo, are currently in the throes of their first major North American tour, following the March 3 release of their latest album, “English Tapas.” They arrive on eddies of hype and enthusiasm from across the pond, where the band’s stark, sparse live show regularly draws overflow crowds.

Sleaford Mods’ concerts have been hailed in the U.K. press as “intense” (“Nottingham Post”) “mesmerizing” (“The Telegraph”) and “menacing, funny and cathartic” (“The Guardian”). In concert and on records, Sleaford Mods channel an inchoate aggression that seems levied at everything and nothing all at once. Rapper-ranter Jason Williamson, now 46, spits about Brexit, about boring holidays, about breakfast cereals, about bike-riding blowhard Boris Johnson, about whatever you got. Enraged, annoyed, affronted by their own national heritage — this is the new British Invasion.

The crowd at the Toronto concert — like, I’d wager, those at many Sleaford Mods shows in North America and abroad — resembled what you’d find at a cash-grabbing reunion show for a post-punk or Brit-pop band: Wire, The Wedding Present, The Fall (whose own ranting, raving frontman, Mark E. Smith, seems an obvious influence on Williamson), whichever. Basically middle-aged music nerds in plastic glasses necking $8 beers, with a few kids to spike the energy and enthusiasm. In the very front row, a gray-haired woman who looked to be in her early 60s, nodded along to the band’s driving, minimalist beats, smiling wide as Williamson peppered in howls of “Fuck England!” during the encore.

A few numbers into the set, a mosh pit kicked up near the stage. It struck me, a 31-year-old whose slam-dancing and push-and-shoving days seem squarely in the rearview, as garish at first. Like, “Really? Kids moshing to lyrics about former Labour Party MP Ed Miliband or about the obnoxiousness of youth itself?” But it soon dawned on me that it was a totally appropriate reaction — sensible, even.

More than their tenuous connections to contemporary hip-hop or the long tradition of politicized British punk music, Sleaford Mods feel possessed by the spirit of that other hyperaggressive, uniquely English musical sub-genre: grindcore. Like that mid-'80s fusion of wailing thrash metal and hardcore punk (see bands with colorful monikers like Napalm Death, Carcass, Extreme Noise Terror), Sleaford Mods are an explosion of pure energy and angry, busting on stage like spring-loaded snakes out of one of those prank jars of beer nuts.

At the eye of the Mods’ maelstrom is Williamson. Watching Williamson at a nearly sold-out show at the Opera House in Toronto (a venue generally reserved for pummeling metal shows) was spellbinding. He saunters onstage in his baggy trousers, shirt already dappled with sweat. He winks at the audience and sucks his teeth and picks his nose and, in the spasms of of his rapid-fire raps about the dreary state of the modern world, he repeatedly smacks himself on the crown of his skull. It’s as if he’s trying to dislodge a clogged torrent of verbiage, jammed up in transit between his brain and his mouth. Backlit on a pretty much empty stage, he is surrounded by a mist of spittle, forming a gauzy halo of rage and exasperation.

Watching him is like watching a pre-superstardom Bruce Springsteen in the 1970s (or at least watching him recalls descriptions of Springsteen in the 70s). He is not only a writhing, spitting, belching, head-smacking avatar of pure performance energy. There’s something more there: an inspiring, invigorating, pseudo-messianic quality. He commands an audience’s attention — and admiration, too. It's equal parts inspiring and unnerving. Were Williamson to rile up the crowd of young punks and sullen middle-aged men to march out of the venue and storm the Bastille, there’s no doubt they’d comply. You want to do what he says.

It’s a paradox that befalls punk’s greatest frontmen — Joe Strummer, Henry Rollins, Jello Biafra, John Lydon before he was a useless, butter-hawking, Trump-supporting sellout and consummate moron — who despite preaching antiauthoritarianism and wailing against the cult of rock ’n’ roll idolatry, exerted a hypnotic, borderline tyrannical sway that seemed to beg our wide-eyed worship. Williamson, who has been quick to reject his thrust-upon status as poet laureate of the alienated English underclasses, would likely roll his buggy, bored eyes at such sentiments. And that, too, is part of his charm.

At Williamson’s side is producer Andrew Fearn, also in loose fitting sweats and a similarly oversize Chief Wiggum T-shirt, beaming maniacally under the brim of his baseball cap. Beyond producing the haunting, dissonant, MIDI rave beats, Fearn has a shtick that's integral to Sleaford Mods’ aesthetic. Basically he sidles onstage, presses play on his laptop and stands behind it sucking on a tall can of lager. As Williamson raps and raves and makes wet fart noises, Fearn sways in place, mouthing the lyrics or shaking his head in astonishment, as if he can’t believe what he’s hearing, even though he hears it every night. In much the same way that the duo’s live show feels like a deconstruction of a live concert, Fearn is like a mute, silent partner version of the typically far more excitable hip-hop hype man.

Sleaford Mods’ connections to contemporary hip-hop feel a bit tenuous. Like, yes, Williamson is technically rapping, in many places. And a common point of comparison for the duo is Birmingham, England's hip-hop project The Streets. But claiming that these two old white Englishmen are the saviors of modern hip-hop feels a bit gross. Especially because, in America at least, the medium doesn’t really need saving. It’s plenty pointed, acutely political and positioned squarely in the centre of pop culture.

Still, some fruitful comparisons can be drawn. Like the American hip-hop duo Run The Jewels, Sleaford Mods speak with equal parts rage and wry humor of the howling despair of the world. They feel at once (to use a hackneyed phrase) “of the moment,” and entirely universal. People will be listening to Sleaford Mods decades down the road, even when Boris Johnson is nothing but a faint memory because there will always be people and politicians like Boris Johnson. And besides name-checking British politicians and music scene posers, the Mods speak to the alienation of modern life in late capitalism, and the dreary prospect of getting older, when the steady cycle of late nights in pubs, scamming drugs and waking up blindingly hung over takes on a harrowing, Sisyphean dimension. On the title track of the 2016 EP “TCR,” Williamson productively compares boozy middle age to the ubiquitous late-'70s-early-'80s slot-car racing set Total Control Racing, snapping:

I hate going out, going out is for young people

I can't sit and enjoy a drink, I want the lot

Have you got any numbers?

And how much has he got?

The injury of your useless mind, stuck to the track

Even as someone in his early 30s, who was jaw-droppingly agog at the harrowing accuracy of these lines upon first blush, I can’t help but find them invigorating. With nearly 90 years between them, Sleaford Mods prove that the embryonic, take-no-prisoners wrath of punk rock isn’t just a youthful preoccupation or some immature young man’s game. Like a savvy, cynical, middle-age stand-up comic sharpened by flinty realities of life experience, the duo prove that rage and resentment can become even sharper with age.

With this same rage now being sold back to the disenfranchised and irate in tone-deaf Pepsi ads, Sleaford Mods prove how important it is to keep these fires burning. It’s like in “Heat” when Al Pacino’s berserk police detective barks, “I gotta hold on to my angst. I preserve it because I need it. It keeps me sharp, on the edge, where I gotta be.” Being angry — even if it’s at everything and nothing — is its own kind of vigilance in a world that would gladly reify and repackage that rage. It keep us on the edge, where we gotta be.

Perhaps, in due time, Fearn and Williamson will lose their edge, sell out and slump like Sex Pistols and Public Image Ltd. singer John Lydon (née Johnny Rotten), and so many other punk idols, into conservatism and complacency. But for now, the two shaggy, spitting, splenetically infuriated old blokes in baggy gym wear prove Lydon’s old adage, expressed on PiL’s 1986 crossover single “Rise”: Anger is an energy.