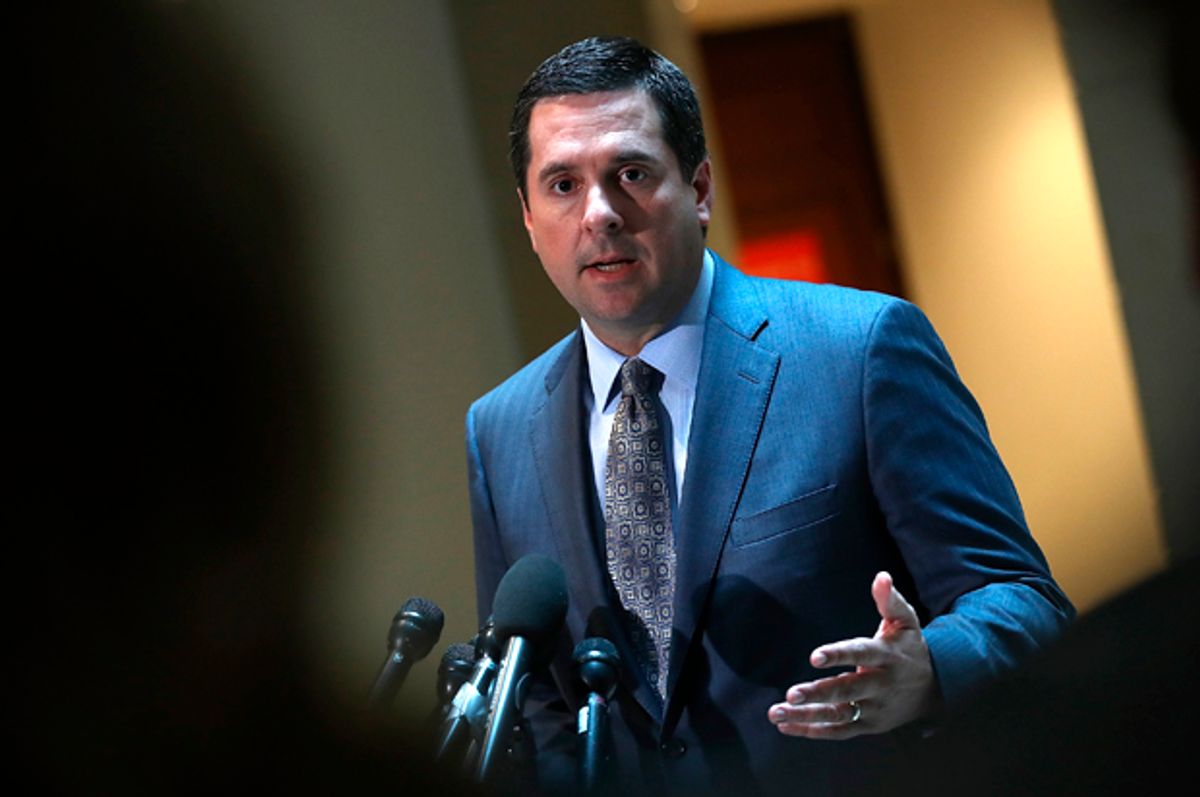 House Intelligence Committee Chairman Devin Nunes, R-Calif., is stepping aside from the committee's probe into Russia in the aftermath of controversy over his seeming to use his power for political actions on behalf of Trump.

Nunes is going to temporarily remove himself from the committee's investigation into Russia's alleged interference in the 2016 presidential election, an act that will include probing of communications between the Trump campaign and officials connected to the Russian government, according to a report by Politico. Nunes' role leading that investigation will instead be assumed by three Republican congressmen: Reps. Michael Conaway of Texas, Trey Gowdy of South Carolina, and Tom Rooney of Florida.

"Several left-wing activist groups have filed accusations against me with the Office of Congressional Ethics," Nunes said in a statement. After denying the charges as "false," "politically motivated," and "baseless," Nunes said that he would allow the three congressmen to "temporarily take charge" of the Russia investigation. Nunes also said that he would "continue to fulfill all my other responsibilities as Committee Chairman, and I am requesting to speak to the Ethics Committee at the earliest possible opportunity in order to expedite the dismissal of these false claims."

The House Ethics Committee has confirmed that it is investigating whether Nunes improperly disclosed classified information. This refers to Nunes surreptitiously going to the White House shortly after FBI Director James Comey testified before the House committee, during which time he is accused of having received information from White House officials about the incidental collection of conversations involving Trump transition officials and their unmasking. Nunes then disclosed what he had learned with President Trump and House Speaker Paul Ryan before discussing it with members of his own committee.

There are also concerns about the individuals Nunes has chosen to replace him. Gowdy has been a Trump loyalist who served on the then president-elect's transition team, Conaway once tried to downplay the seriousness of the allegations against Russia by comparing it to Mexican celebrities campaigning for Hillary Clinton in Nevada, and Rooney — despite calling on Trump to drop out of the race after the disclosure of his "Access Hollywood" tapes —  has voted for Trump's positions 100 percent of the time since the president took office.