Fifty years ago, the Reverend Martin Luther King broke his silence on war and capitalism

The "giant triplets of racism, extreme materialism, and militarism" continue to break the spirit of humanity 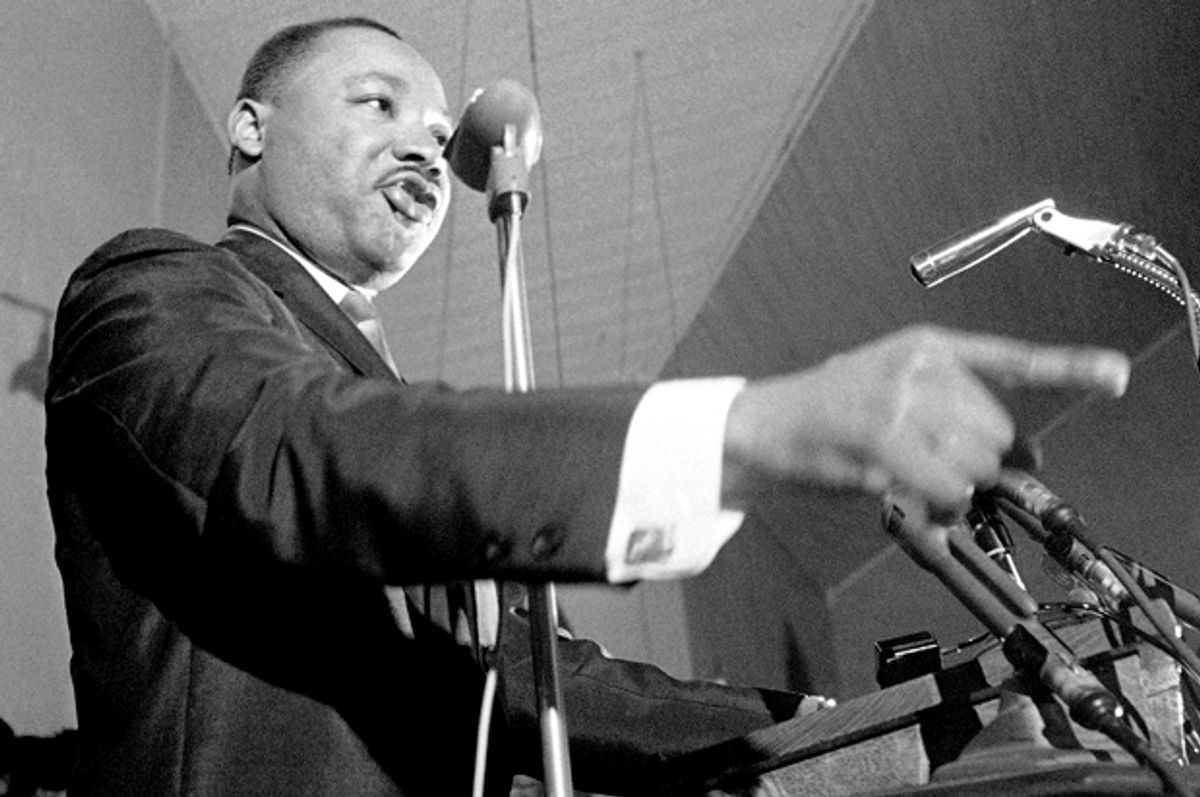 Fifty years ago, Reverend Dr. Martin Luther King, Jr., delivered a talk entitled "Beyond Vietnam: A Time To Break the Silence" at New York’s Riverside Church. He had come to talk in searing terms about the American war on Vietnam. That American war had begun in 1955, a year after the French withdrawal from their former colony. In the 1960s, US President Lyndon B. Johnson escalated the US presence in Vietnam, which faced sustained aerial bombardment. The sheer brutality of the use of chemical weapons and heavy bombs is reflected in the opinion of the Chief of Staff of the US Air Force Curtis LeMay who said, "we’re going to bomb them back into the Stone Age." It was against this vulgarity that Dr. King decided to speak. Silence was no longer possible. Religious leaders had to move "beyond the prophesying of smooth patriotism to the high grounds of a firm dissent." Dr. King, on 4 April 1967, positioned himself squarely on those high grounds.

During that year — 1967 — the United States air force conducted over two thousand weekly bombing runs over both North and South Vietnam. The year’s total ordinance dropped would add up to 15 million tons of explosives. By the time the United States withdrew from Vietnam, it had dropped three times the total tonnage of ordinance used in World War II. On Laos, the US dropped 2.5 million tons of munitions, seven bombs for every Laotian. The nature of the weapons curdles the stomach — cluster bombs, Agent Orange, poisonous herbicide, napalm, and fleshettes. It is important to underline that at least three million Vietnamese civilians died in that war.

Dr. King’s prose is powerful — and unvarnished — on these atrocities. How do the Vietnamese experience the war? "They watch as we poison their water, as we kill a million acres of their crops. They must weep as the bulldozers roar through their areas preparing to destroy the precious trees. They wander into hospitals with at least twenty casualties from American firepower for one Vietcong-inflicted injury. So far we may have killed a million of them, mostly children ... Now there is little left to build on, save bitterness." Surely, he said, "this madness must cease."

On April 17th, 1965, two years before Dr. King took the podium, twenty-five thousand people came to Washington as part of a protest called by the Students for a Democratic Society against the US war on Vietnam. The numbers of those who would come onto the streets as part of the anti-war movement would escalate from April 1965 to April 1967, including a hundred thousand people at protests across the country over the weekend of 15-16 October 1965. On 17 February 1966, world heavyweight boxing champion Muhammad Ali refused the draft saying, "I ain’t got no quarrel with them Viet Cong." A few months later, Stokeley Carmichael, a leader of the Student Non-Violent Coordinating Committee, described the war colorfully as ‘white people sending black people to make war on yellow people in order to defend the land they stole from red people.’

Dr. King joined a major struggle that had begun two years before him. But, in characteristic fashion, Dr. King’s entry into the anti-war movement was both lyrical and decisive. He did not merely speak against the war on moral grounds. The war, he argued, would divert the energy of the United States from the promise of the Civil Rights movement. Precious public funds were being moved from tending to the American poor to warfare, and it was the American working-class of all colors that was being sent to operate in "brutal solidarity" as they burnt the "huts of a poor village." When America’s dejected took up Molotov cocktails and rifles in 1965, Dr. King went amongst them to plead for nonviolent action. But now the country was using ‘massive doses of violence to solve its problem.’ Was this example not one for ordinary people in the United States to follow?

The war must end, Dr. King said, and to bring it to an end those who had been drafted must object. They must not go to war. The war machine must be paralyzed. The working-class that is forced to go fight the war of the rich must demand that the resources go toward their own broken lives. This was a powerful statement. It echoes in our times.

Who was responsible for this war? Not the Vietnamese. They were part of the Third World upsurge, which had emerged after World War II in Africa, Asia and Latin America. ‘These are revolutionary times,’ Dr. King said. "All over the globe men are revolting against old systems of exploitation and oppression, and out of the wounds of a frail world, new systems of justice and equality are being born. The shirtless and barefoot people of the land are rising up as never before. The people who sat in darkness have seen a great light." Here is Césaire’s "Discourse on Colonialism" (1950) and Fanon’s "Wretched of the Earth" (1961), deeply felt prose on behalf of the world’s shirtless and barefoot peoples. Dr. King was speaking of the Vietnamese, but he had in mind all those others from Ghana (where he had attended the independence ceremony in 1957) to India (where he had been to the ‘land of Gandhi’ in 1959). The world’s people wanted to live with dignity. They had a right to self-determination.

It was the West, Dr. King said pointedly, that was against this upsurge. In his speech he mentioned the "counterrevolutionary action of American forces in Guatemala" in 1954 and the actions of the Green Berets in Peru. Why was the United States so involved in "counterrevolutionary action"? Dr. King, unlike many liberals in the anti-war camp, went deeply into the heart of the American malady. "When machines and computers, profits motives and property rights, are considered more important than people," said the Reverend, "the giant triplets of racism, extreme materialism, and militarism are incapable of being conquered." The West, as the spear of global capitalism, wanted to suffocate the aspirations of the world’s people. This warfare, Dr. King underscored, would not only sabotage the planet’s hopes but it would also destroy the promise of the Civil Rights movement in the United States.

Three days later, the New York Times wrote an editorial titled "Dr. King’s Error." The basic point in this essay was that by linking the war with Civil Rights Dr. King had "done a disservice to both." The mandarins at the Times believed that Dr. King was wrong to say that the war would drain funds from the anti-poverty work in the United States. But the data did show, even in 1967, that the funds for urban redevelopment and for employment in Chicago, Harlem and Watts was being drawn down while the government increased its commitments to the war. It was also clear by 1967 that increasingly numbers of Black and Brown men went to fight in the war, in "brutal solidarity" — as Dr. King said — with white soldiers against a war against the Third World upsurge. What the Times did not see was that the Civil Rights movement was kin to the Third World upsurge and that an attack on one — in Vietnam — was also an attack on the other — Civil Rights in the United States. Dr. King saw this clearly. It was not a matter merely of resources. It was a matter of participating in the global revolutionary dynamic.

As President, Barack Obama liked to quote Dr. King’s line about the "fierce urgency of now," which is a line that appears towards the end of this 1967 speech. That part of the speech was a rebuke to the kind of thinking in the Times editorial. Why was Dr. King excised with the "fierce urgency of now"? Because, he said, in human affairs there is "such a thing as being too late. Procrastination is the thief of time." Terrible events surround us. These events compel us to voice dissent. "Over the bleached bones and jumbled residues of numerous civilizations are written the pathetic words, Too Late. There is an invisible book of life that faithfully records our vigilance or our neglect." King wanted to write his name on the side of justice. He was not bothered by the sanctimonious rhetoric from the Times and from establishment liberals who raised their eyebrows at his vigil.

A year later, Dr. King said, "Only when it is dark enough, can you see the stars." It was of course dark enough in 1968. Dr. King was killed on the first anniversary of this speech. Whether that was a coincidence of not is not important (Reverend Vincent Harding, who helped King write the speech, thought it was not a coincidence). We are at the fiftieth anniversary of the speech. The sky is now so dark that even the stars are muted. Voices are stilled, afraid to say the full truth — that the "giant triplets of racism, extreme materialism, and militarism" break the spirit of humanity.