So much for President Steve Bannon: Did Jared and Ivanka orchestrate the downfall of Trump's key adviser?

With Jivanka's rise and Bannon's ouster from the National Security Council, maybe the apocalypse can be delayed 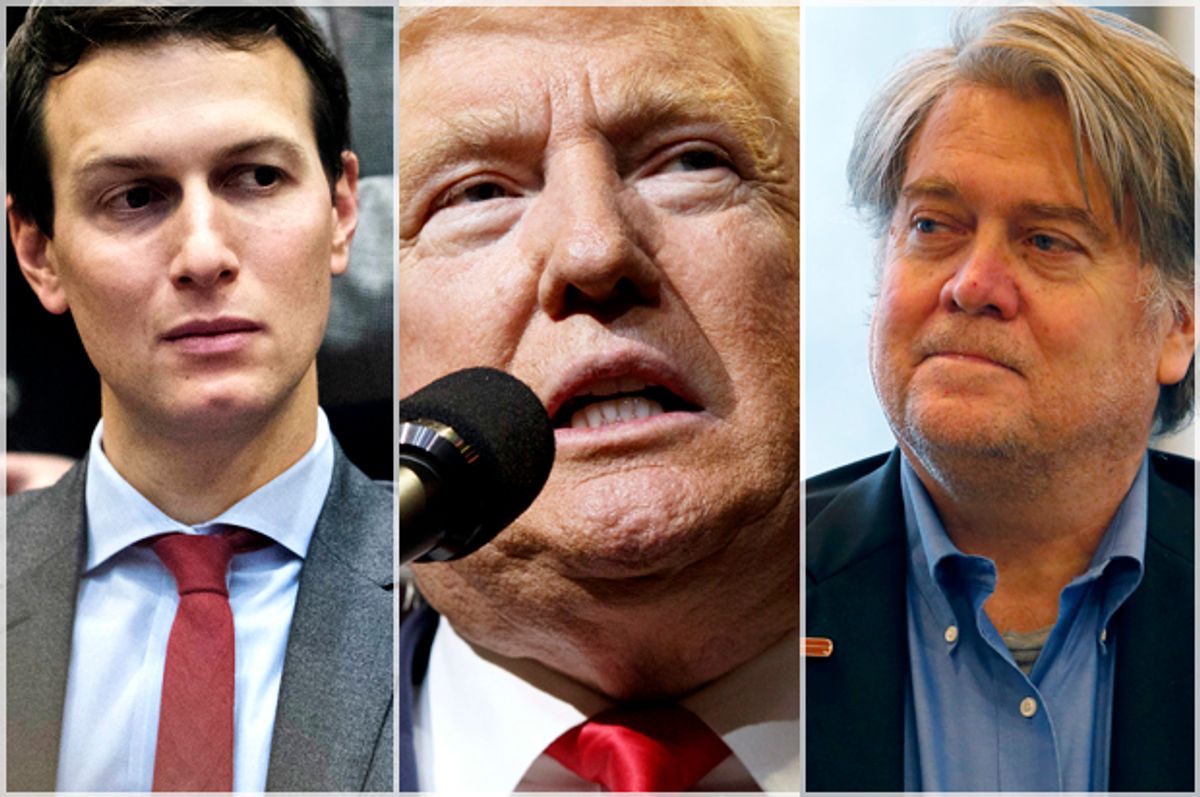 A week or so ago I noted that Jared Kushner, the son Donald Trump never had, seemed to be taking on a lot of new projects. Since then there has been a flurry of reporting on his burgeoning portfolio, including the news that Kushner is the administration's new point man on China in anticipation of the important visit from Chinese leader Xi Jinping this week. But just as he weirdly decided to take a ski vacation during the administration's most important legislative battle a couple of weeks ago, Kushner inexplicably decided to take a trip to Iraq this week with the chairman of the Joint Chiefs of Staff and Keith Schiller.

Wait, who's Keith Schiller? I can tell you. See the following tweet:

Meanwhile, President Trump has installed his daughter Ivanka in an official government position that enables her to participate in all the meetings with foreign leaders — the ones in which she had already been participating since the transition. According to reports from the meetings, unlike her father, Ivanka even does some advance preparation. Foreign delegations are grateful to learn that someone in the president's confidence can skim a briefing paper.

On Wednesday the White House announced that Steve Bannon, the president's other right-hand man, would be stepping down from his outrageously inappropriate membership as a principal on the National Security Council. Bannon tried to spin it as a normal event, cleverly evoking the right's designated distraction goblin of the moment, Susan Rice. From the New York Times:

“Susan Rice operationalized the N.S.C. during the last administration,” Mr. Bannon said in a statement, referring to President Barack Obama’s national security adviser. “I was put on the N.S.C. with General [Michael] Flynn to ensure that it was de-operationalized. General [H.R.] McMaster has returned the N.S.C. to its proper function.”

Mr. Bannon did not explain what he meant by “operationalized” or how his presence on the committee had ensured it would not be.

His allies put out a different story: Bannon had been put on the National Security Council's principals committee to keep an eye on former national security adviser Michael Flynn, and with the latter's departure, this was no longer necessary. There was no explanation about why the move took so long; Flynn has been gone for nearly two months. In any case, the Times also reported that Bannon had threatened to quit over the demotion, so all these self-serving explanations ring more than a little bit hollow.

Bannon had been running a shadow National Security Council called the Strategic Initiatives Group, described as an internal White House "think tank" and assembled as an alternative to the traditional structures within the executive branch. It was seen as a terrible management idea, as it gave a back channel to a president who has no idea what he is doing and exacerbated his already chaotic decision-making. Evidently, that project has also been tabled, supplanted by Kushner's shiny new "Office of American Innovation."

That Bannon stepped away from a national security role is undoubtedly a big relief to the rest of the planet, since he is an apocalyptic fruitcake who believes in a theory called the "Fourth Turning," whereby history happens in four-stage cycles of awakening and crisis. He claims that the previous cycles in America were the Revolution, the Civil War, the Great Depression and World War II, and he believes we're now in another one that started with the bank bailout in 2008. As the Huffington Post reported:

In Bannon’s view, we are in the midst of an existential war, and everything is a part of that conflict. Treaties must be torn up, enemies named, culture changed. Global conflagration, should it occur, would only prove the theory correct. For Bannon, the Fourth Turning has arrived. The Grey Champion, a messianic strongman figure, may have already emerged. The apocalypse is now.

“What we are witnessing,” Bannon told The Washington Post . . . “is the birth of a new political order.”

It's unknown how much Donald Trump bought into this daft worldview or if he even understood it. We do know that he considered Bannon one of his most important advisers. This is a recent relationship born of the excitement of the campaign and the thrill of winning, however, so it's not surprising that Trump might turn on Bannon when the going got tough. Now that the administration is suffering one humiliating defeat and embarrassment after another — and blaming the previous president, Hillary Clinton or even the GOP Congress isn't working — Trump's circle is narrowing to the only people he has ever truly trusted: his family.

This turn of events was foretold by the people who know Trump better than anyone: his biographers. The late journalist Wayne Barrett, who wrote "Trump: The Greatest Show on Earth," predicted that Bannon wouldn't last. As Barrett told the New Republic:

A guy like Steve Bannon . . .  I don’t know much about the guy, so I could be completely misunderstanding him, but I think that’s a guy Trump uses up quickly. That’ll be a body he steps over.

Timothy O'Brien, author of "TrumpNation: The Art of Being the Donald," has pointed out that New Jersey Gov. Chris Christie and former New York Mayor Rudy Giuliani lost favor because they had high profiles. In that light, Bannon's appearance on the cover of Time magazine may have sealed his fate. O'Brien told CNN's Anderson Cooper:

Trump likes advocates and loyalists and people who advocate his viewpoint, but not people who get more airtime and attention than he does. That’s been the kiss of death for anybody who is an adviser to him who’s not a family member.

O'Brien also had the Kushner rise pegged in January, when he participated in a Politico roundtable of Trump biographers:

Tim O'Brien: At the end of the day, the two most powerful people in his White House, other than him, are going to be Jared Kushner and Ivanka Trump, and they’re going to have the final say on everything. And whatever Gary Cohn or Rex Tillerson or Gen. Mattis or Jeff Sessions or Steve Bannon has to say, it will all end up getting filtered through Javanka.

O’Brien: Yeah. Other than those two, he won’t listen to anyone in a meaningful way, and he never has listened to anyone outside of his core group and family at the Trump Organization for decades, and that’s not going to change.

All the palace intrigue around this White House is so thick you never really know what's happening or who has Trump's ear. But all signs point to Javanka's ordering the hit. The question now is: Who's next?