“Stop being victims. I think it’s wicked, in a way, to be a victim": Matt Tyrnauer's new documentary is "Citizen Jane"

A David and Goliath battle pitted Jane Jacobs against Robet Moses, an overbearing tyrant with no time for consensus 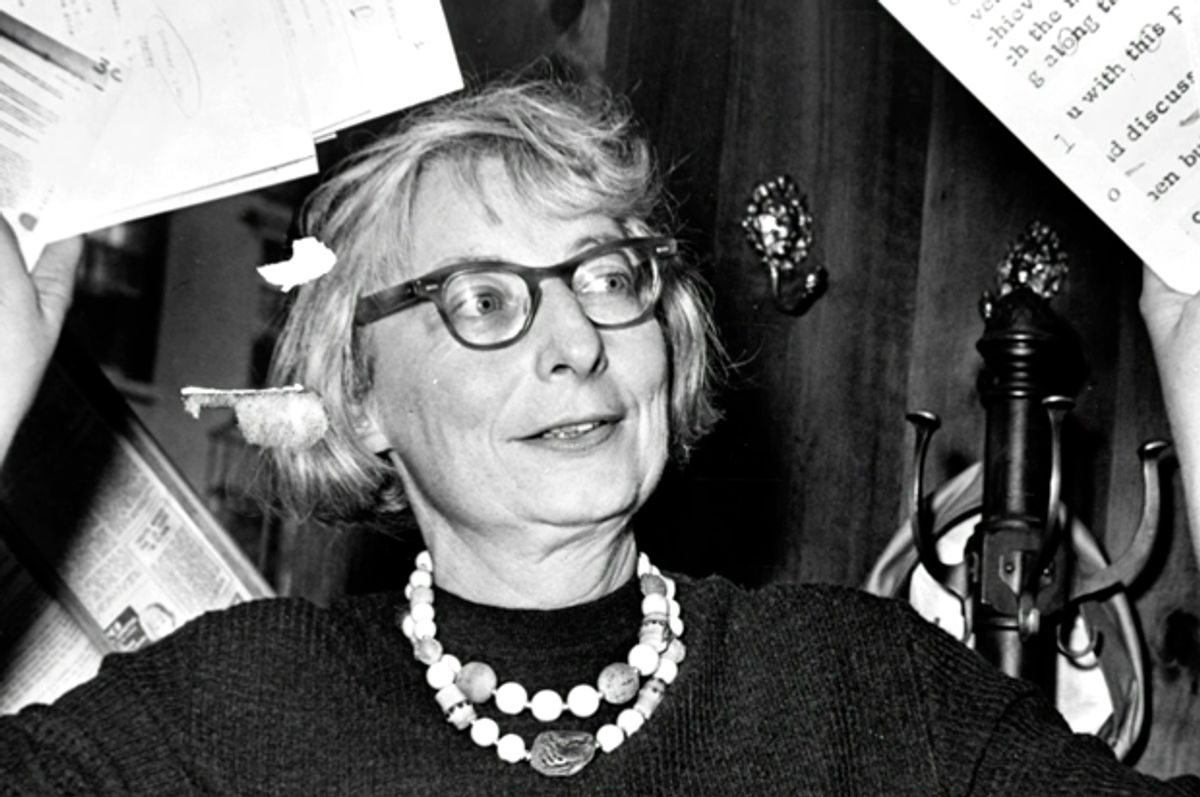 Anyone looking for some uplift with substance in these troubling Trumpian times ought to check out "Citizen Jane: Battle for the City," director Matt Tyrnauer’s new documentary about Jane Jacobs, the journalist, activist and author of "The Death and Life of Great America Cities," who redefined urban planning in the 20th century. The film hits theaters on April 21.

In telling Jacobs’ story, much of it focusing on her battle with autocratic New York City planner Robert Moses, "Citizen Jane" incidentally provides a blueprint for confronting another “I alone” leader who says batshit crazy things and bulldozes his opponents by any means necessary.

“A lot of people who have seen the film tell me how they see the contemporary resonance,” Tyrnauer says. “I get that, but to compare Trump to Robert Moses is to insult Robert Moses. He was a true intellectual. And he started progressive but became drunk with power.”

Tyrnauer found a good ally with whom to make the film: One of his producers, Robert Hammond, is the co-founder of downtown New York’s High Line, a municipal project that would have surely made Jacobs, who passed away in 2006, proud. In Hammond, Tyrnauer found a fellow Jacobs fan, as well as a living example of her spirit.

“One thing the High Line does that is similar to Jane Jacobs is that they both make you see New York City in a different way. Jacobs, through her writing and her approach to the city and establishing the idea that cities are people and networks of individuals,” Tyrnaer says, “and the High Line makes you see your surroundings at a totally different angle. And that shift of perspective is automatically enlightening.”

How Jacobs would have handled Trump — Tyrnauer and Hammond are not aware of any run-ins between the two when he was a mere real estate tycoon — may be conjecture, but Hammond sees dark echoes of Moses in Trump.

“When was the last time someone demonized cities and looked at cities as decay with the need for an outsider to come in to fix them,” Hammond asks. “This is cities under siege. And slum renewal becomes a euphemism for a lot of things.”

Hammond also notes that Moses would say “crazy shit that you wouldn’t even have a bad guy in a movie say because it sounded so bad.” Indeed, Moses, who might call his enemies, “goo-goos,” would explain away the razing of neighborhoods with utterances like, “You can’t make an omelet without breaking some eggs.”

In contrast, Jacobs was a font of eloquent, innovative wisdom. Take for example, the following passage from "The Death and Life of Great America Cities," which also appears in "Citizen Jane: Battle for the City:"

“Under the seeming disorder of the old city, wherever the old city is working successfully, is a marvelous order for maintaining the safety of the streets and the freedom of the city. It is a complex order. Its essence is intricacy of sidewalk use, bringing with it a constant succession of eyes. This order is all composed of movement and change, and although it is life, not art, we may fancifully call it the art form of the city and liken it to the dance — not to a simple-minded precision dance with everyone kicking up at the same time, twirling in unison and bowing off en masse, but to an intricate ballet in which the individual dancers and ensembles all have distinctive parts which miraculously reinforce each other and compose an orderly whole.”

If you’re freaking out about Donald Trump, these are seven takeaways from "Citizen Jane" and the High Line to put in your toolkit:

Anyone can effect change

Jacobs’ ability to organize communities and defeat two of Moses’ major plans in lower Manhattan is a quintessential David and Goliath tale. “This woman who had little power and who wasn’t considered an expert changed the way we think about city planning,” Tyrnauer says. “She was able to defeat Moses.”

Be creative and clever

Long before this year’s pussy-hats, Jacobs had protestors tape x’s on their glasses to mimic the x’s that were placed on condemned buildings being readied for bulldozing. She appropriated a symbol and placed it on the people. She also enlisted neighborhood children to spy on surveyors and had kids tie a ribbon (rather than cut one) to stop a road going through Washington Square Park.

Opposition is an advocate

Jacobs used antipathy toward Moses to form alliances. The same has happened in the marches against the Trump administration. “My version of Trump was Giuliani,” says Hammond, who used the former mayor’s opposition to the High Line as a way to draw supporters. “Opposition can be an advocate. We would purposefully tell people that Giuliani was against it.”

When a planning committee was set to pass a measure allowing a lower Manhattan expressway to cut through downtown neighborhoods, Jacobs seized on the fact that the stenographer had lost her tape so that there would be no record of the meeting. And without a record, the hearing wouldn’t be legitimate. The delay created an opening for an eventual victory.

Stop feeling sorry for yourself

Jacobs once said, “Stop being victims. I think it’s wicked, in a way, to be a victim. It’s even wickeder to be a predator, but it’s wicked to be a victim and allow it.” Tyrnauer relishes discovering this quote and made sure to include it in the film. “Who thinks in such an arresting way?” he asks. “She really wakes you up. She truly spoke truth to power.”

Build on what is working

“People talk about how she was a ‘No, no, no’ person. But her inspiration was that she looked around her city and she saw what was working,” Hammond says. “And she built on that.” Adds Tyrnauer; “Jacobs was interested in looking at what was working in cities and letting those things flourish. . . not uprooting or impeding them, which was the result, whether intended or not, of urban renewalists.”

Back in her day, cities were associated with blight and the term gentrification wasn’t used, but Jacobs warned of neighborhoods “ceasing to be mixed income and a decline in the array of city dwellers,” says Tyrnauer. "Jane warned of over-success, and the High Line has been tremendously successful — beyond our wildest expectations,” Hammond says. “Now, we're evolving how we engage with our community so that everyone can take part in and benefit from that success. That's why we're doubling down on our community-focused programming and other community engagement efforts."