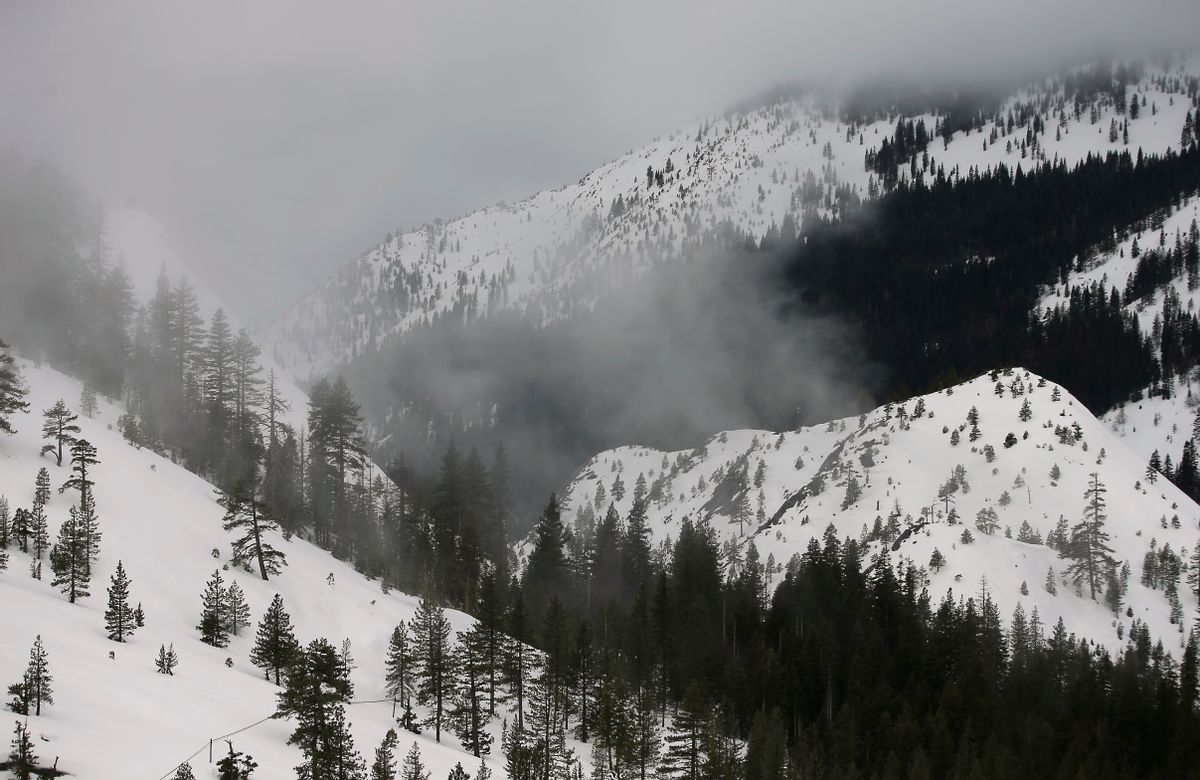 California's snowpack is on track for one of the wettest winters on record after five years of drought. (AP)
--

When Gov. Jerry Brown of California walked out onto the Phillips Station snow course near Lake Tahoe on April 1, 2015, for the annual end-of-winter snow survey, he stepped only on bare ground. This year, surveyors were greeted with a much more welcome sight: a sizable snowpack that accumulated over the winter thanks to a spate of storms that nearly wiped out the deep, devastating drought that has plagued California over the past five years.

With the snowpack now at more than 160 percent of normal statewide levels, officials are facing the opposite issue, with potential for flooding as snowmelt runs into streams and reservoirs already swollen with winter rains.

While California is no stranger to such boom-and-bust water years, the state is facing the potential for significant hydrological changes over the next few decades as global temperatures continue to rise with the accumulation of heat-trapping greenhouse gases in the atmosphere.

The resulting changes in California’s climate will mean that more winter precipitation falls as rain rather than snow, and that what snow there is will melt earlier in the season, reducing the amount of meltwater available to top up reservoirs in the hot, dry summer months.

A recent study also suggests, somewhat counterintuitively, that an earlier snowmelt may also mean slower snowmelt, with possible implications for streamflow and reservoir storage. The finding, detailed in the journal Nature Climate Change, points to the complicated interactions that scientists and water managers in California are facing as they try to make the state’s water system more resilient to climate change.

The Difference One Winter Makes

Around the beginning of California’s wet season in late fall, three-quarters of the state was mired in drought, with 40 percent in the two highest categories recognized by the U.S. Drought Monitor.

But repeated winter storms, particularly the moisture-heavy ones known as atmospheric rivers, dumped plenty of rain and snow on the state, which now has only 8 percent of its area in drought. December through February was the second wettest such period in the past 122 years, and the end-of-winter snowpack ranked in the top quarter, according to the California Department of Water Resources. The April 1, 2015, snowpack, by contrast, was the lowest on record, and likely the lowest in the past 500 years.

During the drought, climate scientists have been investigating how global warming might alter the potential for drought in California. The clearest link is that warmer temperatures will exacerbate already dry conditions because they cause more evaporation. In this way, warming likely made this most recent drought worse, with California recording two record-warm winters in a row (as well as its warmest and second warmest years overall).

Less clear is the impact that warming may have on the state’s precipitation patterns. The drought was ushered in by a persistent area of high pressure that deflected storms away from California; from 2012 to 2015, the state effectively missed out on a year’s worth of rain, according to one study. But research into whether climate change may impact the potential for such a pattern to crop up more often in the future hasn’t found any clear answers.

Climate scientists do expect, though, that warming temperatures will make more of winter’s precipitation fall as rain, rather than snow, and will cause the snowpack to contract to higher mountain elevations. What snow there is will also likely melt earlier in the season because of warmer winter and spring temperatures. Both of these factors mean that less snow will be available to keep reservoirs fed during the peak demand months of the summer.

That earlier snowmelt will likely happen more slowly, though, according to the new study, published in February. The deeper snowpacks usually found at higher elevations tend to last into the late spring and early summer, when a higher sun angle means more energy available to melt snows and so those snows melt faster. The shallower snowpacks at lower elevations, however, tend to melt out earlier in the season when there is less solar energy and so they melt more slowly.

With warming expected to mean more shallow snowpacks at ever higher elevations, the snowpack overall will likely melt out earlier in the future and do so at slower rates.

Slower melting has implications for stream flow and reservoirs. Higher snowmelt rates mean there is more water available than vegetation and soils are able to soak up, with the excess running into streams, rivers and reservoirs.

But “when snow melts more slowly, that water lingers in the soil giving plants and the atmosphere more opportunity to take up that moisture, resulting in less streamflow,” Keith Musselman, lead author of the study and a postdoctoral researcher at the National Center for Atmospheric Research, said in an email.

The work “is a big step forward in understanding how temperature affects our snow water resources, but there remains much to be learned,” Adrian Harpold, a hydrologist at the University of Nevada, Reno, said in an email. Harpold wasn’t involved with this study, but has found this trend in slower melt rates in observations and has collaborated with Musselman in the past.

What a change! The view from space shows the #snow pack today April 1st, 2017 vs the record low snow pack back in 2015 over #NorCal! #cawx pic.twitter.com/R5dXRMA6p4

The earlier, slower snowmelt could also alter flood risks. Right now, prolonged sunny periods in spring and summer tend to cause pulses of melting that can raise flood risks. But if the overall snowmelt rate is lower, it “may take some of the sting out of the snowmelt pulses when they do come,” Michael Dettinger, a research hydrologist with the U.S. Geological Survey who also wasn’t involved with the study, said in an email.

“While the background melt rate may be slower in a warmer world, hydrologists and flood managers can't let their guard down,” he said. “We should be paying close attention to how extreme events may change.”