The backers of a speculative super-fast transportation system went to D.C. in a bid to be taken more seriously 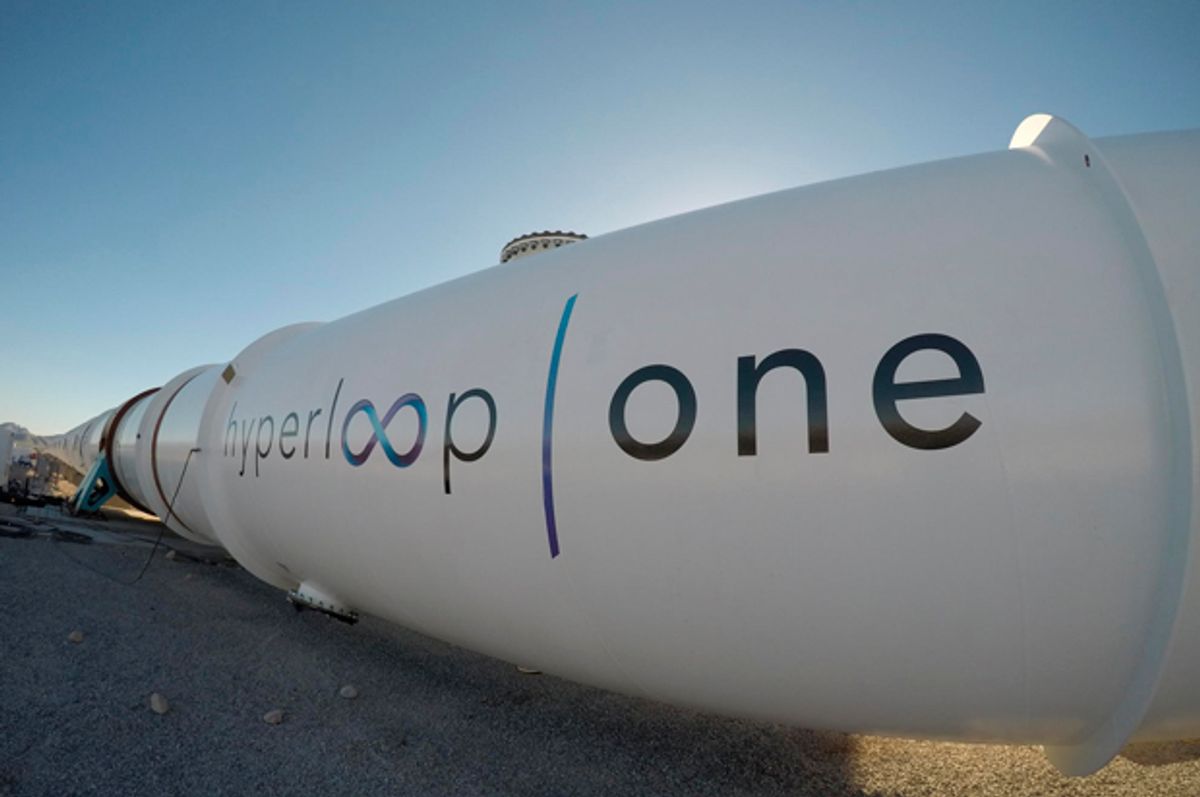 A 1,600-foot steel tube outside of Las Vegas is foretelling the future of high-speed transport that will be designed and built by Americans and that could help revitalize the country’s post-industrial Rust Belt.

Or at least that’s what the founders of Hyperloop One want President Donald Trump to hear. The company that wants to build systems to whisk passengers from city to city in a series of vacuum tubes went to Washington, D.C., this week to showcase its latest developments, clearly with the White House and Congress in mind.

"We're creating blue collar [and] white collar jobs with an all-American solution that is being designed here and can be built here," Hyperloop One CEO Rob Lloyd said during an event at the Newseum.

Lloyd, who spent 21 years at internet infrastructure company Cisco, specifically highlighted a proposed Hyperloop route that would connect Pittsburgh to Chicago via Columbus, Ohio, in an apparent nod to Trump’s vision of creating jobs in pockets of the country he and his supporters say have been neglected by previous administrations.

Hyperloop One claims its systems can be built for a fraction of the cost of high-speed rail. And the company has every reason to want Washington on its side, because what they propose is going to require a lot of regulatory and safety approvals, as well as public-private support.

The Los Angeles-based startup has emerged as the leader in the race to build an elaborate transportation system proposed by billionaire magnate Elon Musk, the co-founder of Tesla Motors and SpaceX, who released a 58-page paper in 2012 outlining the feasibility of this new transportation system. Hyperloop One recently completed its Nevada test track and is scheduled to perform its first test run sometime this summer.

The Hyperloop, as Musk coined it, would use passenger and cargo cars traveling in reduced-pressure steel tubes while hovering over electromagnetic rails. The partial vacuum coupled with the hovering effect and a high-powered turbine engine would greatly reduce drag and send these pods rocketing at velocities near the speed of sound, greatly reducing travel times between cities connected to the system.

This Rust Belt route Lloyd mentioned was one of the finalists of Hyperloop One’s global “challenge” in which 35 sites, including 11 in the U.S., were selected by the company to become the first places to receive the transportation technology. The company will eventually narrow its selection to three locations.

But before a shovel hits the ground on any of these projects, Hyperloop One must prove that it has overcome some considerable engineering challenges. Here are three of its biggest technical hurdles.

1. The Hyperloop needs a constant vacuum

If the Hyperloop concept fails, it could likely come from the problem of maintaining an adequate vacuum over a long distance. It’s one thing to build a 1,600-foot vacuum tube to test the system and another to build one that’s 400 miles long with millions of square feet of space that needs to keep a lot of air out.

To be clear, the vacuum isn’t perfect. It’s roughly the same as the earth’s atmosphere at about 170,000 feet, 32 miles, or more than four times the highest altitude of a long-haul commercial jet. But that still requires sucking an immense amount of air out of the tube and maintaining that vacuum against the natural forces that want to push in and fill the space with air.

In addition to maintaining this vacuum, the tube will have to accommodate the constant vibrations of passenger capsules weighing 15 tons (when fully loaded) flying inside a steel tube at nearly the speed of sound.

There is also the question of maintenance costs. The Hyperloop might cost less to build than a high-speed rail system, but there is little known about how much it might cost to maintain a Hyperloop system over its lifetime.

2. The Hyperloop needs to be stretchy

If you’ve ever walked across a bridge you might have noticed expansion joints, interlocking steel comb-like structures embedded in the road that allow the bridge to expand and contract with temperature changes. Without them, bridges would lose their structural integrity after only a few years of seasonal changes in the weather.

A 400-mile-long steel tube the size of the one needed for the Hyperloop would require the entire system to be able to extend and contract within a range of roughly 1,000 feet in length between freezing weather and the hottest day of the year in a temperate climate, according to estimates by Phil Mason, a British biochemist who frequently dismantles sketchy innovation claims through his YouTube channel, Thunderf00t.

Building this flexibility into a bridge is relatively easy; building it for a vacuum tube poses an immense engineering challenge. A 400-mile Hyperloop could require hundreds if not thousands of flexible vacuum seals placed intermittently along the length of the tube that would allow it to grow and contract with seasonal changes. The only structure comparable to that type of engineering is the Large Hadron Collider, the particle accelerator near Geneva. It contains about 30 miles of vacuum tube and 18,000 vacuum seals. The Hyperloop wouldn’t need nearly as many seals, but it would need a lot of them to give the entire tube the elasticity it would need.

And what about earthquakes? Musk devotes three paragraphs in his paper about the very real challenge of coping with seismic activity and other natural movements of land that could occur over the life of the system. Musk suggests using a system of pylons and dampers that would suspend the tube in the same position even if the pylons were to be bumped around by seismic activity. Putting that engineering feature on paper is easy; actually building it isn’t.

3. And what about safety?

Imagine riding inside a 15-ton bullet in which the only thing between safely arriving at your destination and utter calamity is a steel wall that’s about an inch thick. You’re riding in a bullet powered by an engine whose turbine blades have to spin much faster than the ones powering commercial jets because of the low-vacuum environment, which increases the odds of blade failure that can rip through metal.

Any catastrophic breach of the vacuum tube would cause air to rush in at an incredibly high speed. This potentially deadly shockwave would send outside air blasting in both directions, hitting passenger capsules along the way with a damaging force.

What happens in the event of of this large-scale depressurization? You have potentially hundreds of people stalled inside a tube. How do they get out? Musk says in his paper this could be resolved with emergency exits placed intermittently along the length of the tube. He doesn’t delve into evacuation protocol, but presumably it would be similar to how subway cars are evacuated in the event of an emergency, with the added challenge of the system stretching for hundreds of miles and passengers stranded inside a steel tube.

A lot of thing can go wrong with any form of transportation. Planes crash, trains derail and cars careen into each other. Terrorists can blow up trains or try to take down aircraft. But the Hyperloop’s unique quality also gives it unique safety-related challenges. This is why Hyperloop One is focusing first on moving cargo instead of people. It will take longer to prove that the Hyperloop is the future of safe, high-speed long-distance travel.