Ivanka wants to be the girl with the most cake: A New York Democrat in private and a public Trump loyalist, all at once

Like Roald Dahl's Veruca Salt, another rich girl who wanted more than she deserved, Ivanka lets greed drive her 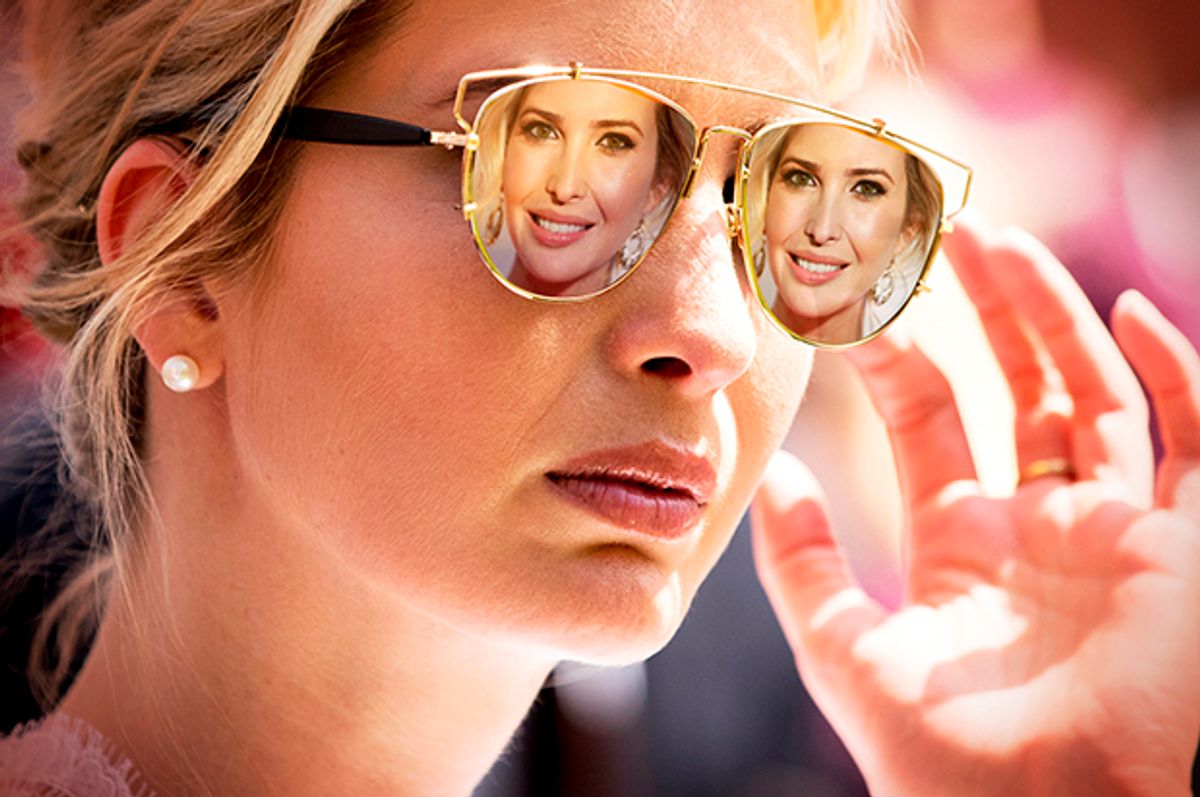 Earlier this week, we learned that Ivanka Trump held a secret meeting with the head of Planned Parenthood, an organization the Republican Party has been hell-bent on destroying for years. According to Politico, Ivanka reached out to Cecile Richards, president of the Planned Parenthood Federation of America, in the weeks after Donald Trump’s inauguration but before Ivanka’s daddy gave her her very own office in the West Wing and an official job because she wanted one very much, to discuss the organization’s work and impact on women.

Given the vague timeline, it’s unclear whether Ivanka was pretending to listen to Richards speak right before — or even at the very moment when — her father signed an executive order expanding the ban on U.S. funding for international family planning groups that perform abortions or even provide information about them. But Planned Parenthood itself has remained in the crosshairs of the Trump administration and the GOP. First of all through the so-far futile attempt to repeal and replace the Affordable Care Act, and then through the actions of Vice President Mike Pence (that vampire-looking dude Ivanka pretends not to know in the hallway). He's the guy who recently cast the tie-breaking vote in the Senate on a bill that will allow states to deny federal funding to healthcare providers that perform abortions, putting the government one step closer to defunding Planned Parenthood, which President Trump is expected to sign into law.

Apparently an audience with Ivanka is worth about as much as a pair of clearance slingbacks.

Ivanka defended herself on Wednesday, in a CBS interview with Gayle King, against critics who say she is “complicit” in the Trump administration’s attempts to degrade the quality of life for women, LGBT people, immigrants, refugees, Muslims, low-income Americans and basically anyone who’s not already a paying member at Mar-a-Lago. Such critics by should not “conflate lack of public denouncement with silence,” the first daughter said.

I think there are multiple ways to have your voice heard. In some cases, it’s through protest and it’s through going on the nightly news and talking about or denouncing every issue on which you disagree with. Other times it is quietly and directly and candidly.

So where I disagree with my father, he knows it. And I express myself with total candor. Where I agree, I fully lean in and support the agenda and — and hope — that I can be an asset to him and — and make a positive impact. But I respect the fact that he always listens.

The best part of Ivanka's interview, aside from when she activated her defensive tic ("so, you know") when questioned about her husband Jared's super-qualified job qualifications, was her acknowledgment that she'll "take hits from some critics who say that I should take to the street. And then other people will in the long term respect where I get to. But I think most of the impact I have, over time most people will not actually know about.”

First of all, Ivanka doesn't take to the street — the street has already taken the anti-oppression dance party to her. But nobody should buy her "you'll never know the good I do" act. Any time Javanka has managed to score a win, "people familiar with the issue" have tattled to the Times faster than you can say "Steve Bannon has a diseased heart." People who like to see their own names emblazoned on anything that will stand still long enough to be gilded and sold do not modestly refuse credit for anything. It is not their custom. Hence, of course, we are learning now that Ivanka totally nodded in sympathy back in January while Cecile Richards explained that Planned Parenthood is the only option for many women to receive the vital and lifesaving health care they need, up to and including abortions — less than a week after her daddy's veep grinned as he broke that Senate tie.

Of course Ivanka supports Planned Parenthood. In theory. Not because she has to safeguard abortion access for herself or her peers — an Amsterdam Abortion can become the new Brazilian Butt Lift for those with means — and not because she cares about poor women, because that would require she acknowledge they exist. She is simply, as Steve Bannon recently belched at her husband, a Democrat — and a New York City Democrat to boot. Her lip service to Cecile Richards is merely a signifier for that cosmopolitan cred, not an indication that she plans on walking in public any of her private talk.

Jared and Ivanka are a force to be reckoned with, as Bannon now knows. But liberals and progressives shouldn't make the mistake of mistaking "the Democrats" for actual Democrats — Ivanka isn't in the White House to play Daddy Whisperer on behalf of anyone but herself. She's there to shore up her own power, and Jared's, in whatever future form it will take.

Presumably, after Trump Force One departs Washington for the final time, she'll want to eat lunch in both of these towns again — and not with Karen Pence, either. This duality — Trumpian Republican in the streets, New York Democrat in the metaphorical sheets — requires the kind of fine-line walking and both-sides playing that is an integral part of the Ivanka Trump brand, and it's already showing signs of fraying around the edges.

Like Veruca Salt before her, Ivanka wants it all, and she wants it now — to reap the rewards of being Daddy's favorite, which requires her never criticizing his decisions in public, and to remain in good standing among her own people, which she believes she can achieve by occasionally being reported on as a Trojan Liberal in King Trump's Court. Ivanka might have sold a lifestyle of "having it all" back when that meant "all that money can buy," but the lefty-friendly fantasy version of Ivanka as a force for good who nevertheless participates fully in her father's morally bankrupt kleptocracy is entirely too rich. It's becoming increasingly clear that she serves, above all, a party of one.