Prices for Columbia River salmon have quadrupled, and you’ll find it on the menu at Michelin-star restaurants. 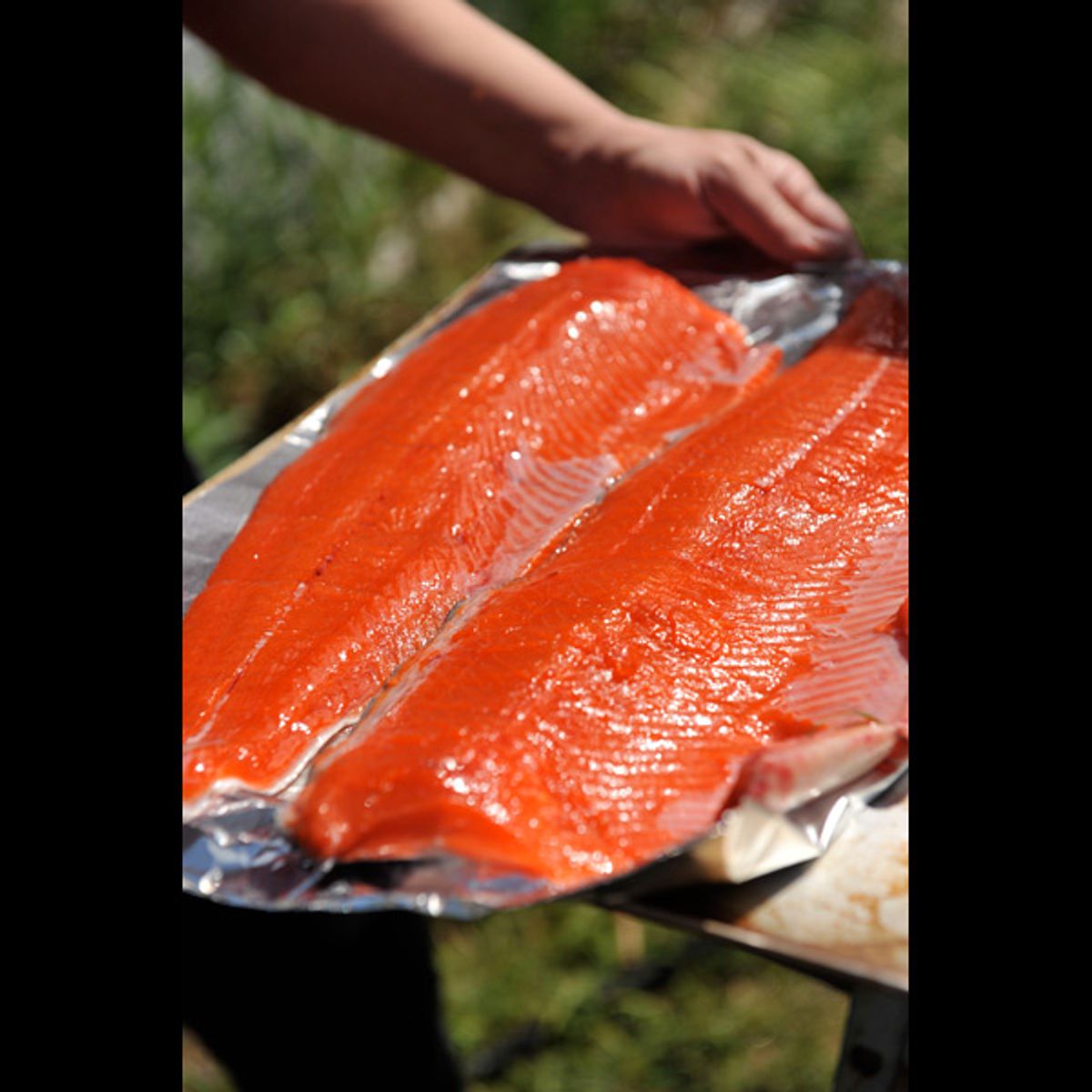 Out in the middle of nowhere, people look out for one another. That fact is especially evident in the boonies of southern Washington as you cut east along the Columbia River in the company of “Sockeye” Suzy Lumley. If you come across her, don’t be surprised if she hands you some canned salmon.

She gives fish out by the pallet, as I learned one February afternoon, when Lumley and I drove the two-lane highway that winds along the Columbia’s banks. We flew by open country and rolling hills, then passed a small group of Yakama Native American women on the roadside. When Lumley, who is also Yakama, saw their colorful dresses billowing in the wind, she slammed on the brakes and spun around her red Dodge Ram. After exchanging a few words with the women, Lumley — who is tiny, just 4-foot 10-inches tall — climbed into the Ram’s bed and handed off a square flat of fish.

Lumley has enough to share. She runs a small business canning and selling Columbia River sockeye and other species. Poverty is vicious and familiar, especially for the Yakama, Umatilla, Warm Springs, and Nez Perce Nations, the primary tribes that live out here. At the end of a long winter, especially, every can of fish helps.

Northwestern Native Americans have caught salmon from the Columbia River for thousands of years. Nowadays, for nine months out of the year, tribal fishermen leave their reservations and relocate to trailer camps that pop up every few miles along a roughly 150-mile stretch of riverbank.

Bookended by two dams, these grounds form part of the border between Oregon and Washington State. For decades, Native fishermen got little more from the river’s bounty beyond their own subsistence. Seafood buyers offered meager prices to Natives because the methods commonly used to handle and store catches (basically, tossing fish in the stern of a boat or back of a pickup truck) weren’t up to commercial standards.

That’s changed over the past 10 years, thanks to the efforts of Lumley and others; now prices for Columbia River salmon have roughly quadrupled, and you’ll find it on the menu at Michelin-star restaurants across the country.

The higher prices paid for the Native catch have rippling economic benefits for indigenous communities. More members of tribes — younger ones, too — are heading to the river. Small businesses, like Lumley’s, can now afford to hire new employees off the reservation and build sorely needed infrastructure. And with the aid of a government-funded program that brings Native American foods to a global audience — a distribution avenue that could be endangered by Trump administration budget cuts — Lumley is dreaming big about an expanded Columbia River fishery that lifts all boats.

“You can hold your hand in ice water, and it’s cold,” JoLena Castilleja says as we crunch along the gravelly banks of the Columbia. Wearing a knit cap and hunting jacket, she mimes placing a fish into an icy slurry.

Castilleja, 36, is Lumley’s oldest daughter, and she fishes alongside her brother, sister-in-law, three cousins, and stepfather in the family business.

When you add salt to ice water, the slurry’s temperature plummets, Castilleja explains. “There’s no holding your hand in,” she says, laughing.

Today, on the banks of the Columbia, freshly caught salmon is immediately knocked over the head, bled from the gills, and then plunged into coolers of iced salt water. The blood-draining and extreme cold are crucial to high-quality meat—keeping it firm and extending the catch’s shelf life by a week or two. Castilleja and many other Native American fishermen learned the technique in free food-handling classes offered through the nonprofit Columbia River Inter-Tribal Fish Commission.

Roger Dick, a fisheries biologist and member of the Yakama Nation, who grew up in a fishing family, tells me that prices were much lower in the 1990s and early 2000s, before the kind of coolers that Castilleja describes caught on. The Yakama’s busiest salmon season, from August to October, once netted between $1 million and $2 million, Dick says. Today, it’s worth up to $6 million.

The new wealth is critical to Yakama fishermen, who typically survive the winter on the reservation, an hour or so north of the Columbia, depleting their savings until fishing starts up again in spring.

Substance abuse is pervasive on the reservation, where 43 percent of families live in poverty. (For comparison, the national rate was 13.5 percent in 2015.) In winter, the unemployment rate climbs to more than 70 percent, 14 times the national average.
People like Lumley are reinvesting the increased revenue from salmon fishing back into the community. She sources her fish from members of all four tribes. And for the past 10 seasons, she has hired and housed at least half a dozen Yakama teens on the Columbia — expanding her business and keeping the youth out of trouble.

“It turned around some of these kids,” says Eric Stanford, a fish buyer who has known Lumley for a dozen years.

The higher prices are drawing more fishermen to the river and improving life back on the reservation. Families now have more income to keep the lights on through the winter off-season, to buy their kids school clothes, and to invest in newer, better fishing gear, Dick says.

Of course, the fishing is both seasonal and cyclical — dependent on when salmon runs take place in the tribes’ section of the river, as well as how many fish happen to show up. But while there’s some concern about scarcity year-to-year, overfishing isn’t a problem, according to Dick. State, federal, and tribal officials negotiate strictly-enforced limits on the number of fish that Native Americans can catch every season — and quotas can be adjusted in the future to ensure salmon keep coming back.

Although ice has made Native-caught fish more competitive, it’s a scarce resource on the Columbia. Lumley typically buys ice in 10-pound bags from a little store near her camp. When the shop runs out — which it often does — she has to drive at least 40 minutes, one way, to stock up.

There is a single ice machine on the entire stretch of river, and it whirs away inside an otherwise empty warehouse an hour’s drive from Lumley’s camp. The building went up more than a decade ago, and was initially conceived as a fish-processing and smoking plant for the four tribes to share. But instead, according to Lumley, the groups are now bickering over financing and control of the project.

So Lumley is taking matters into her own hands. She plans to install a second ice machine near her family’s fishing camp. And she intends to fulfill the promise of building a processing plant on the river — a co-op that fishing crews from the four tribes can all use. Today, Lumley has to drive four hours into Oregon to have her catch smoked and processed. In 2015, one of the plants she worked with may have under-processed her fish, leading to a botulism scare and voluntary recall. Cutting out the middleman would give her more quality control in the future. It could also net dramatically better prices — on the order of five times higher for a single fish, she estimates.

Her plan to get around the quarreling that led to the processing plant sitting almost empty? Demonstrate that unity is a common interest. As Lumley draws in more business, she plans to buy from more local fishermen and pay them progressively higher prices. Once everyone sees that their wages are rising, she explains, she is certain Native American fishermen will come together.

“It’s a way to get the prices up for the rest of the Natives,” Lumley says. “That’s my main goal.”

Wild fish taste better than farmed, and the Columbia’s salmon have become some of the most coveted in restaurant kitchens from Seattle to New York City. As the Native fishery has taken off, the origin of the catch has been a valuable sales tool.

“Sometimes that story is a little marketing piece you’re able to use to help sell that extra fish or two,” says Johnny Anderson, vice president of a seafood distributor called Foods in Season.

Now the Columbia River brand is going global. A few times a year, Lumley jets from the Northwest to far-flung locales like Boston or Hong Kong, where she networks at trade shows. A bumper crop of small businesses and tribal cooperatives is breaking into new markets under the umbrella of American Indian Foods, a program administered by the nonprofit Intertribal Agriculture Council and partially funded by the U.S. Department of Agriculture.

The trade association— which began in 1998 to promote indigenous cultures through food — has assisted 40 tribes across the lower 48 and Alaska. Samples of Lumley’s canned smoked salmon and fresh fillets, as well as crab from Alaska, wine and olive oil from California, and wild rice from Minnesota, feature prominently at these events.

To join American Indian Foods, a business has to be 51 percent Native-owned and agree to bear a small, purple certification stamp on its products. In the last decade, members’ international sales have surged from fewer than a million dollars per year up to $20 million, according to an estimate from program director Nathan Notah.

With global access, operations can scale up quickly. Native American–owned businesses can afford to hire more of their own people, support youth and social programs, and reinvest in their tribes.

President Trump’s new budget proposal, though, would cut almost $5 billion dollars from the USDA. The program’s 20-year momentum could grind to a halt, torpedoing the fortunes of burgeoning Native American small businesses.

Without American Indian Foods, Lumley’s business would likely survive, but her dreams of a benevolent empire along the Columbia would take a blow. Since September, Lumley has met seven potential buyers at trade shows but hasn’t closed any deals. Some of her new contacts are planning to visit the river to get a better sense of her operation — and Lumley hopes they’ll then commit to her as a supplier.

She wants international clients to pay a premium for her fish, which she’ll source from the Yakama, Umatilla, Warm Springs, and Nez Perce Nations — creating the stronger, united, communal fishery of her dreams.

“I’m not just promoting my product; I’m promoting the four tribes on the Columbia,” she says. “I represent everybody.”