WATCH: Humorist P. J. O'Rourke on Donald Trump's impending doom: "You could be really unpleasantly surprised" by how it happens

Conservative humorist P. J. O'Rourke has made no peace with Trump — and sees little hope on either left or right 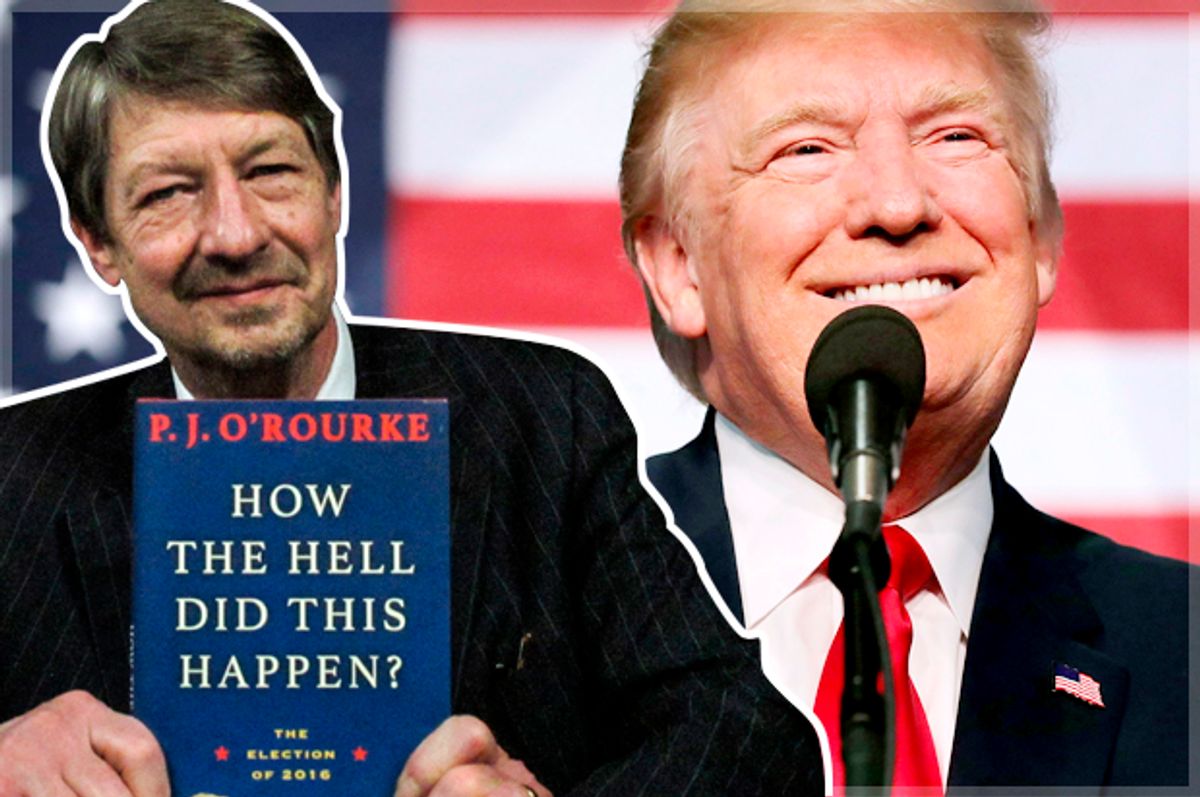 Like most leading conservatives — and like most members of the political and media castes of all ideologies — humorist P. J. O’Rourke believed, well into last year's presidential campaign, that Donald Trump’s insurgent candidacy would be another of those momentary pseudo-populist disruptions that threaten to upend American politics before order is restored. We never even got close to President Herman Cain or President Ross Perot, after all.

Yet here we are, less than three months into Donald Trump’s presidency, a fact that strikes me once or twice a day — as I witness his ruddy complexion, his anti-gravity combover and his perpetual toddler-pout on CNN — as so improbable that it must be some kind of mass delusion or cosmic practical joke. The entire Trumpian scenario feels like something O’Rourke’s staff at National Lampoon, where he was a writer and editor during the magazine’s 1970s glory days, might have cooked up as a dystopian parody, and then dropped after a few issues when it just got too ridiculous.

O’Rourke stopped by Salon’s New York office recently to talk about his new book “How the Hell Did This Happen?”, a collection of his recent essays and commentaries about . . . well, you only get one guess what it’s about. During the 2016 campaign, O’Rourke experienced what he has called a “come-to-Satan moment,” and wound up endorsing Hillary Clinton, a person he has long despised. “She’s wrong about absolutely everything,” he wrote at the time, “but she’s wrong within normal parameters.”

Given how that whole business turned out, O’Rourke now finds himself something of a pariah on the right (at least for now) and without an ideological home anywhere else. Since his emergence in the early ’70s he has been something of a novelty on the overwhelmingly left-liberal American comedy scene — and to some degree has cashed in on that. He grew up in what is now the Trump heartland: His dad sold cars in Toledo, Ohio, and unlike most of his Lampoon colleagues he didn’t go to Harvard or any other Ivy League school. During the Reagan years, O’Rourke successfully cast himself as smug yuppie defender of the new order, which was often massively irritating (and no doubt meant to be).

Indeed, if I could go back in time and tell my younger self, in his dingy but vast San Francisco apartment (rent: $770!) that one day I’d be on genial terms with P. J. O’Rourke, the result might well be an act of violence that would create an unresolvable science-fiction paradox. Whether my own self-presentation during that era — as a punk-radical journalist and poet — was more or less embarrassing than O’Rourke’s is entirely a matter of perspective, I suppose. It was definitely less lucrative as a career strategy.

What I might tell Young Trotskyist Andrew in my own defense is that I still don’t agree with O’Rourke about much of anything: He swallowed way too much of the Reagan mythology and remains about halfway in denial on how much the “mainstream” conservative movement did to nurture the racism and right-wing nationalism that led to President Trump. Still, O’Rourke’s current position demands some courage: He’s trying to stand for a coherent strain of what he calls “libertarian conservative” thought, at a moment when — as he would agree — the American right has largely been ripped from its ideological moorings and has sold its soul to the orange devil in exchange for power. It’s a bargain he thinks conservatives will regret.

Most important for a humorist, O’Rourke has never held his fire based purely on ideology. As he likes to say, he is one of the few “intentionally funny conservatives,” and he relishes mocking pomposity and hypocrisy on the right as well as the dreary do-gooder sanctimony of liberals. While some NeverTrump conservatives have tried to make peace with the new regime in the wake of his flukey election victory, O’Rourke has not retreated. He told me he still thinks Trump is a disaster for the conservative movement, as well as the country. “It's hard to put my finger on what bothers me most about the Trump administration,” he said. “Poor impulse control? That's a very scary thing in the most powerful person in the world.”

All those things bother me: The populism and the scapegoating and the xenophobia bother me, but then there's a layer of incompetence here. I suppose, in a way, we should be thankful: If he had a coherent ideology, he'd probably be more dangerous.

On a global scale, O’Rourke sees what pretty much everyone sees: “a worldwide rebellion against elites” that has created new openings both for authoritarian nationalist movements on the right and socialist or social democratic movements on the left. What he doesn’t see right now is any clear path forward for either the center-right or center-left ideologies that have long dominated politics in the United States and Western Europe.

I think he’s right about that. Where O’Rourke and I part company, I suspect, is that he still believes the old order of politics was working well enough, and could hypothetically be renewed or redeemed. I’m inclined to argue that this is a revolutionary moment, even if it does not involve tanks on the street or the forcible seizure of power. Trump and Steve Bannon (and perhaps Vladimir Putin) have done us a favor, in historical terms: They have made clear that the task now is to throw away the political structures that weren’t working — which is pretty much all of them — and build anew.

For O’Rourke, the constant scandal, chaos and ineptitude of the Trump administration is not merely destroying the conservative movement, but also damaging the left and the entire discourse of politics. “I think [Trump] does a great disservice to liberalism too,” he said, “by drumming up a frenzy that could lead to Bernie Sanders winning every seat in the next Congress, which probably wouldn't work very well either.”

Here we spent a minute imagining the latter scenes of “The Matrix Revolutions,” with endless Bernie clones occupying every seat in the House of Representatives, Agent Smith-style. Trump, O’Rourke argued, is “causing hysteria on the left and shame on the right. Hysteria and shame are not a great national combination.”

Our conversation happened shortly after Michael Flynn’s mysterious offer of Russia-related testimony in exchange for immunity from prosecution, but before Trump was dragged to the brink of war in Syria. How close is Trump coming to Nixon-land, I wondered — a realm O’Rourke and I can both remember? Will he ultimately be forced from office before 2020? That’s a likely outcome, O’Rourke said, but it’s too early to say on what grounds it might happen — and we should be careful what we wish for.

If we were to make a guess about the Russia connections, we'd probably be wrong. But with this kind of lack of impulse control, this kind of incompetence, this kind of inexperience and this kind of loose talk, this could cause a crisis of some kind that could cause him to leave office. I hesitate to speculate about this stuff, because I'm superstitiously Irish: You don't want to wish for a crisis. That's a “Monkey's Paw” thing! You can say to yourself, “Well, I wish we were rid of President Trump,” and you could be really unpleasantly surprised by the method by which it happens.