Trump's executive order on the environment keeps U.S. participation in the climate agreement. But will he abide? 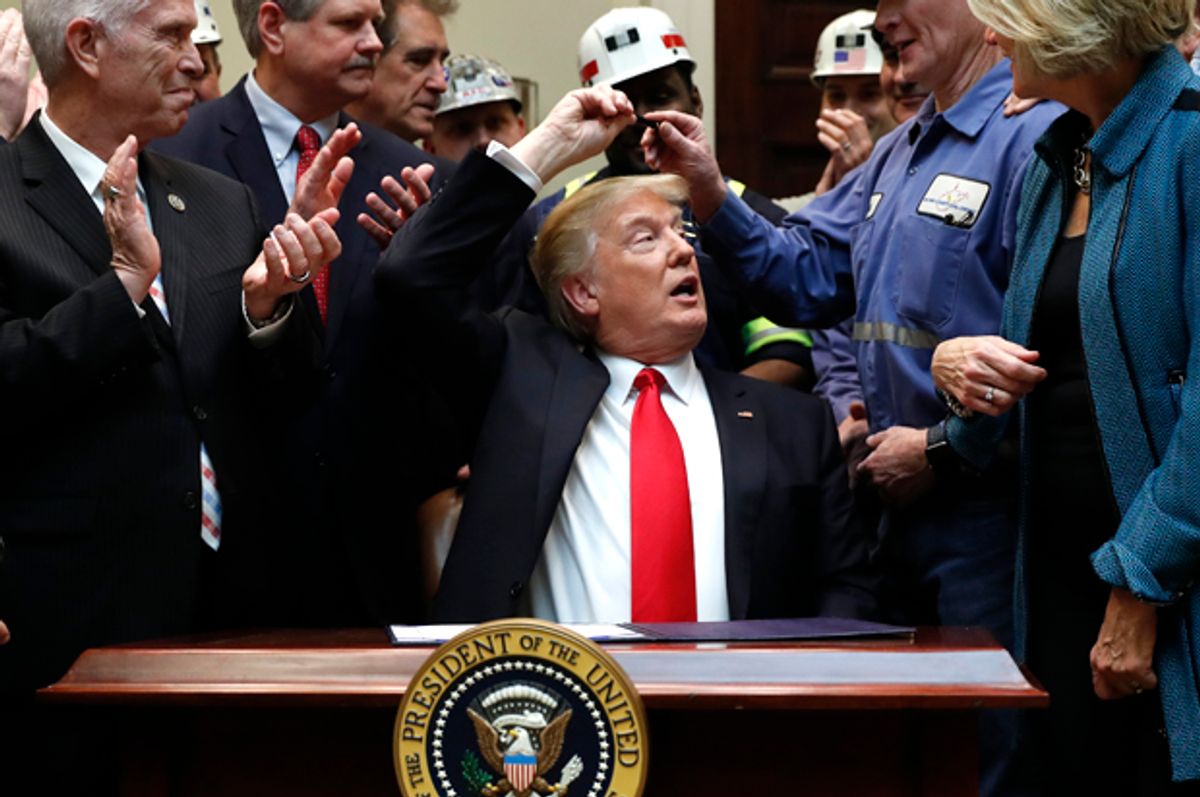 President Donald Trump released his long-awaited executive order on the environment last week. As expected, the order started the process of reversing President Barack Obama’s Clean Power Plan, loosened regulations on U.S. oil, gas and coal production, and revoked a variety of previous executive orders that integrated climate change into federal policy planning. Environmentalists were relieved, however, to see that one major climate policy was spared the axe, at least for now: U.S. participation in the UN Paris climate agreement. But they should not celebrate too quickly. Remaining in the accord is not the same as abiding by it. A zombie Paris agreement — with nominal participation but little practical adherence — carries a different but still substantial peril.

The Paris deal, which came into effect in November 2016, was lauded as the most important climate agreement in history. Nearly all the world’s countries pledged to reduce their own greenhouse gas emissions, and committed to reporting their progress and deepening cuts over time. Wealthier countries, including the United States, promised funding to help poor, vulnerable states adapt. After the 2009 Copenhagen summit, which failed to live up to the lofty expectations placed upon it, the Paris accord was seen as a signal that the UN climate process could still deliver a big, ambitious agreement — and that the world might just yet avoid the worst effects of climate change.

To reach that agreement, however, there were inevitable compromises. U.S. negotiators, with one eye on a Congress hostile to any climate action and the other on a raucous and unpredictable presidential race, took steps to insulate the deal from U.S. politics. For example, the deal did not commit any country to specific emissions reductions, a step that would have required Senate confirmation. Instead, countries offered up emissions reduction pledges of their own, in line with domestic political, economic and technological realities. And though the deal is now a part of international law, it does not include specific enforcement capabilities beyond targeting laggards with public opprobrium.

This looser structure ensured that the United States would be able to participate. But it also ensured that the deal’s success would rely to an unusual degree on signatories remaining committed to the norms, not just the rules, of the deal. For public opprobrium to be a useful deterrent for countries that do not live up to their pledges, the world has to know they are failing to comply. Countries need to develop timely, transparent and consistent monitoring regimes that honestly track progress toward their emissions pledges. Expectations for ratcheting up emissions cuts over time have to be clear and constantly reinforced to prepare the public for changes and to reassure other signatories that any political or economic costs will be borne by all. If countries obfuscate or back away from the hope and ambition felt in Paris, that loose structure could collapse.

In short, the deal depends on trust. And it is exactly this trust that is at risk under the Trump administration.

Some allies of President Trump have argued that the United States need not take the diplomatic risk of leaving Paris in order to avoid complying with it. Washington can choose not to implement the domestic policies necessary to reach its international commitments, or it can simply change those commitments. Nothing in the deal can prevent this. And, indeed, last week’s executive order, plus the administration’s steps to weaken fuel efficiency standards and ease methane emissions restrictions, will guarantee that the United States does not meet the Obama administration’s pledges. Whether the United States remains a signatory or not, the Trump administration is aiming squarely at the fragile trust that undergirds the deal. Other countries have signaled that they intend to remain in the accord irrespective of U.S. actions, but if they were to follow Washington’s lead and weaken their own commitments, the effectiveness of the deal could be rapidly undermined.

This kind of normative disruption would be typical of the Trump administration. Throughout the campaign and the early months of his presidency, Trump has ignored traditional practices of financial transparency, respect for a free press and basic regard for the truth. In each case, his failure to uphold the norms of presidential behavior has undermined public faith in the strength, honesty and durability of American institutions. Paying lip service to the letter of the Paris agreement while ignoring its spirit would be well within the bounds of his typical extraordinary behavior.

The task for supporters of the Paris accord is clear. Shore up trust in and support for the deal among other signatories. Build confidence by helping to develop a transparent, consistent system for monitoring progress toward national pledges. Rally public and private financial support for countries already struggling to adapt. Support international momentum toward more ambitious emissions reduction targets over time. Make sure this administration’s behavior is an outlier, not a harbinger, so that when a climate-friendly president next takes power in Washington, there is more than an undead Paris accord waiting for it.

Lindsay Iversen is Associate Director, Climate and Resources at the Council on Foreign Relations.