How to parse a maddeningly clever album? Refer to the paratext 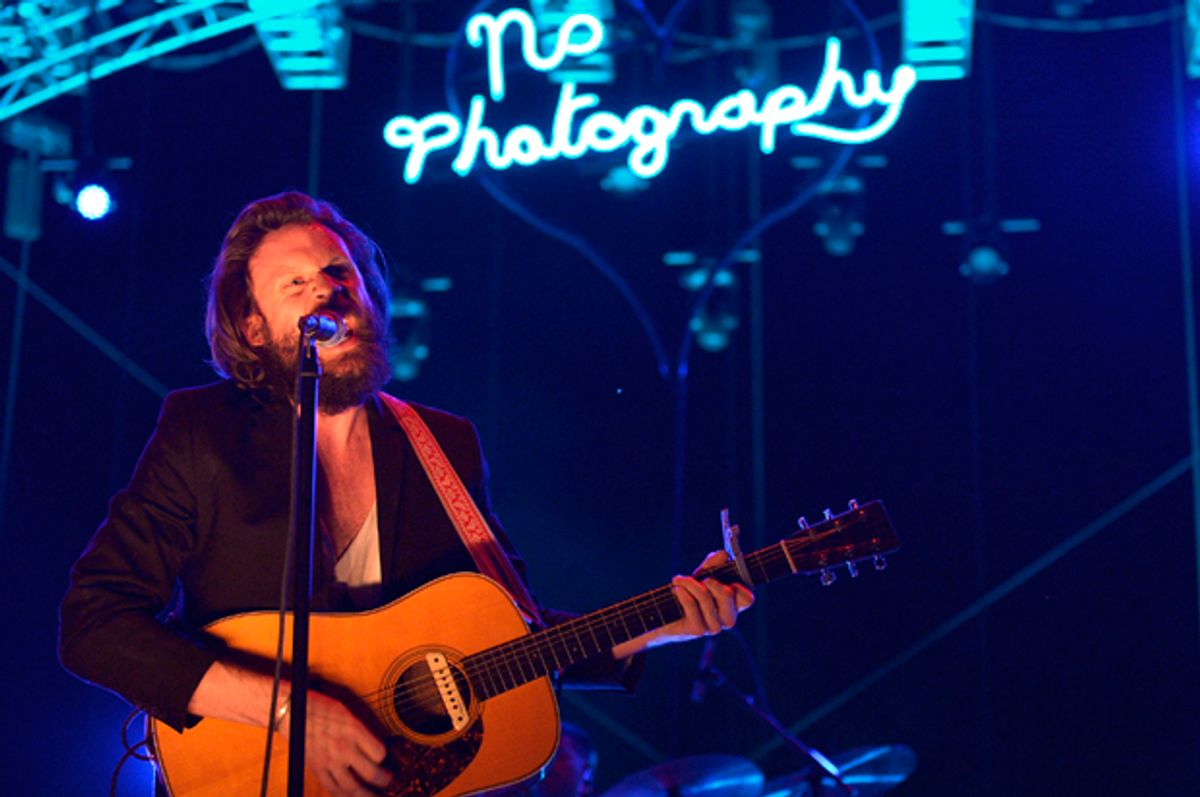 Josh Tillman’s newest album as Father John Misty, “Pure Comedy” (released April 7), is the flamboyant folk singer-songwriter’s hardest to like and easiest to hate. It is less personal, slower and greyer than “Fear Fun” (2012) and “I Love You, Honeybear” (2015). It lacks the winsome romanticism of those albums. And it’s more antagonistic. Misty treats his audience (these people) like a man who gives a wedding speech condemning the institution of marriage.

The thing is, the figurative speech is funny and deeply felt and sort of beautiful and spot on — and if you’re being honest with yourself, what did you expect from Josh? That last part is especially important here. There are plenty of valid critiques of Misty’s new album, but fans cannot say Misty didn’t prepare them.

Since January, Misty has been parceling out morsels of “Pure Comedy.” Throughout the album, he expresses disillusionment with the internet; and yet, the internet was vital to the album’s rollout — he used it to supply vital paratext. “Pure Comedy's” opening course included devilish artwork by New Yorker cartoonist Ed Steed, a mini-documentary, a long essay and the title track — three more tracks, a “Saturday Night Live” performance and a schlocky music video would follow.

Besides whetting listeners’ sonic palates to the tone of the album, the early material signaled the tone of the album to come. Misty claimed the documentary was made from footage of him writing and recording the album. “A six-person crew, complete with cranes in the tracking rooms, captured every moment of the recording, giving the viewer intimate audience to actual album takes,” read the accompanying press release. The documentary, which is black and white, and in which Misty plays the tortured genius, is meant to be ironic (I think), more mockumentary than documentary — it’s reminiscent of “Dewey Cox's” parody of Brian Wilson’s fanatical recording of “Pet Sounds.”

The tone of the essay was similarly sardonic. “'Pure Comedy’ is the story of a species born with a half-formed brain,” Misty wrote, detailing humanity’s past, present and future plight. His solution to the existential problems perpetually facing man? “What I recommend is this: We return to the Vedic cycle and submit ourselves to the likelihood that many of us will end up getting eaten by bears.”

I hesitate to say Tillman was half-kidding — because he very well may have been 10 percent kidding or 90 percent kidding — but amid the satire there was certainly sincerity. And besides, the jokes and the profundity were both part of the same point: American culture in 2017 both takes itself too seriously and does not take big questions seriously enough.

Though Misty is a harsh critic of the present, “Pure Comedy” isn’t a white male guitar-playing folk singer’s nostalgic ode to the past. Rather, Misty positions himself in outer space, viewing Earth from below, his vintage watch wound forward a couple decades. On “Total Entertainment Forever,” the album’s second song, he wryly sings of how exciting a perpetual virtual reality will be, ending the song: “When the historians find us we’ll be in our homes/ Plugged into our hubs/ Skin and bones/ A frozen smile on every face/ As the stories replay/ This must have been a wonderful place.” The next song, “Things It Would Have Been Helpful to Know Before the Revolution,” suggests such a society would be untenable (“It got too hot/ And so we overthrew the system,” the song begins).

The album is a long one hour and 14 minutes and Misty’s purview is vast. He touches on technology, social media, celebrity, entertainment, life, death and human relationships — all shadowed by a dystopic cloud. The dystopic feeling is enhanced by the production. The arrangements are sparse, consisting mostly of strings, piano and light percussion; when Misty’s velvety voice vacates, digital distortion descends.

At times, Misty comes off like an undergrad who recently became obsessed with Don DeLillo. His critique of Americans’ obsession with the web is framed in profound terms but is fairly banal. In “Ballad of the Dying Man,” he sings “Eventually the Dying Man takes his final breath/ But first checks his newsfeed to see what he’s about to miss/ It occurs to him a little late in the game/ We leave as clueless as we came.” And yet, no bit of banality cannot be made up for with rapturous melody. “Ballad of the Dying Man” is one of several songs on the album that have a last-sequence-of-an-epic-film feel to them.

“Pure Comedy” exults in the sublime. Can Father John Misty be a bit pretentious? Sure. But the pretension is offset by the humor (“Bedding Taylor Swift/ Every night inside the Oculus Rift/ After Mister and the Missus finish dinner and the dishes”) and self-awareness. He made clear in January, when he referenced “Ecclesiastes” at the beginning of his essay, that he had no illusions that he would be creating a great original work. “What has been is what will be,” the quote goes, “and what has been done is what will be done,/ and there is nothing new under the sun./ Is there a thing of which it is said,/ ‘See, this is new?’/ It has been already/ in the ages before us./ There is no remembrance of former things,/ nor will there be any remembrance/ of later things yet to be/ among those who come after.”