Is your cat self-aware?

What does the cat see when it looks in the mirror? Humans can learn a lot about consciousness from this test 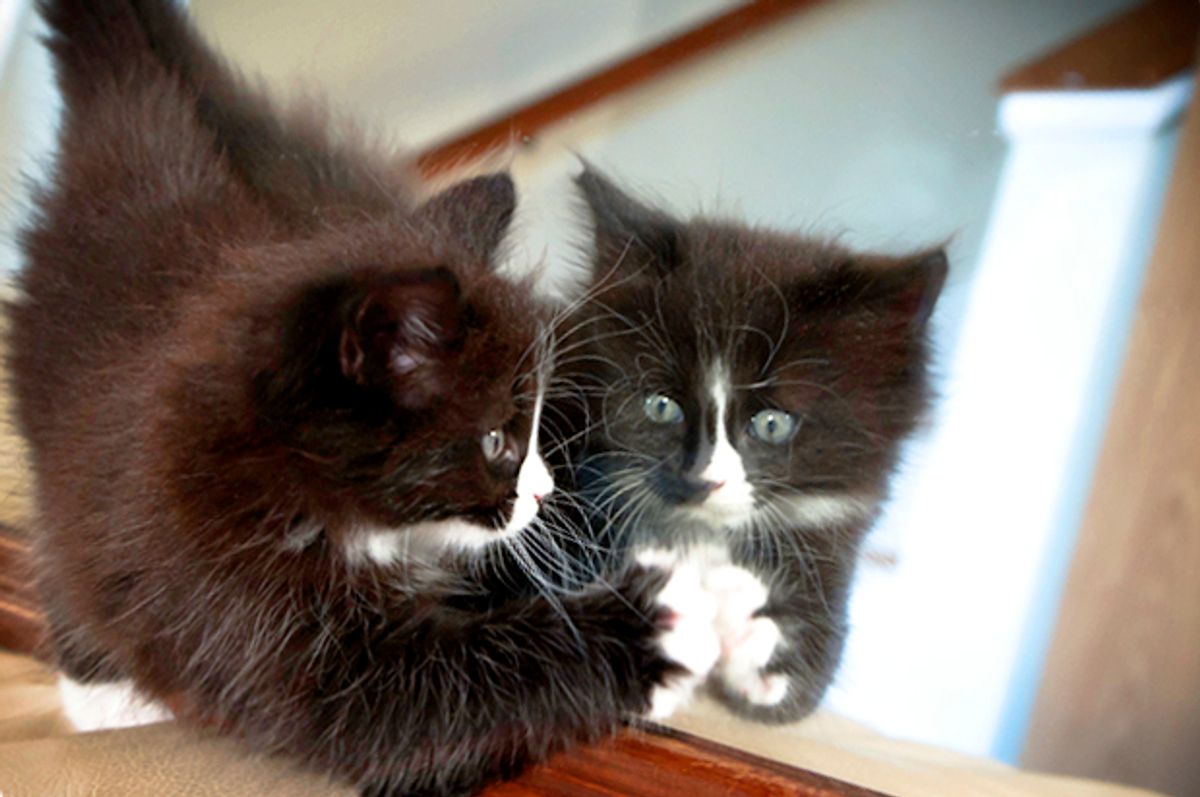 Even if we understand which bit of the brain is firing when we engage in different activities, and how the physics and chemistry of the brain work, it still doesn’t give us much understanding of why we have a sense of “I.” How can we even approach this kind of question? A common strategy for a mathematician trying to understand what something is, is to try to understand why something else isn’t.

Despite my chatbot app’s best attempts to convince me otherwise, I do not believe my smartphone is conscious. Neither is the chair I am sitting on. But what about animals? Before he left home, my black-and-white cat Freddie would sit in my office living a life of leisure as I sat scribbling away at my desk. But did he have a sense of self? What about babies? As my children grew up, their brains evolved, and with it their sense of self-awareness changed. So can we identify different levels of consciousness? Are there thresholds in brain development at which different states of consciousness emerge?

Of course, asking my cat about its internal world is a problem. In the late 1960s, animal behaviorist Gordon Gallup was shaving in the mirror, pondering the question of how to test self-awareness in animals, when he was suddenly struck by an idea. He was aware that the face he was looking at in the mirror was his. He wondered which animals would recognize that what they see in the mirror is not another animal but a reflection of themselves.

Perusing the near infinite number of cat videos on the Internet reveals that cats tend to think the image in the mirror is a rival cat in the room. But how can we really tell? Gallup came up with a test to reveal which species recognize themselves in the mirror, which in turn indicates that they have a sense of self.

His test is simple. Introduce the animal to the mirror so that it familiarizes itself with its reflection. (There is fascinating footage of chimpanzees excitedly dancing along with their images in front of the mirror. But do they think they are dancing with another chimp, or are they admiring their own moves?) At some point, the experimenter takes the animal aside and, while wiping its face, surreptitiously places a red mark just below its eye in such a way that it is unaware of the mark and can’t see it without looking in the mirror. Gallup wanted to know how the animal would now react to seeing its image in the mirror.

If you looked in the mirror and noticed something strange on your cheek, your immediate reaction would be to touch the mark to investigate it. Gallup’s mirror self-recognition test, as it is known, reveals the startling fact that humans are part of a very small group of animals that systematically pass this test of consciousness or self-awareness. The only other species that react in a similar fashion are orangutans and chimpanzees. A third species was added to the list in 2001, thanks to research by Diana Reiss and Lori Marino on bottlenose dolphins.

Although dolphins have no hands with which to touch their mark, they spent much more time in front of the mirrors in their tanks when they had been marked and were uninterested in marks on other dolphins in their tank, indicating some awareness that the dolphin in the mirror was not just another dolphin. Other individual animals have also passed the test. A clever magpie. An elephant. But not a whole species on a consistent basis.

It is striking that chimpanzees start to fail the test once they reach thirty years old; despite having some ten or fifteen years left to live, it seems that self-awareness comes at a cost. Consciousness allows the brain to take part in mental time travel. You can think of yourself in the past and even project yourself into the future. But at the same time, being aware of your own existence means having to confront the inevitability of your demise. Death-awareness is the price we pay for self-awareness. That is why Gallup believes that later in life chimpanzees prefer to lose their ability to be conscious of themselves. Could dementia in humans play a similar role, protecting aging humans from the painful recognition of their impending death?

Of course, the mirror self-recognition test is a very crude measure of consciousness. It has a bias toward species with highly developed sight. Dogs, for example, do not have good vision but rely on scent to identify other dogs, so you wouldn’t expect a dog to pass such a test of self-awareness even if it had an equally well-developed sense of self. Even for those species for whom sight is the primary sense with which to negotiate the world, it is a very rough test of self-awareness. Nonetheless, it has striking consequences when applied to humans, because we can use it to discover when the brain goes through a transition that allows us to start to recognize the image in the mirror.