Virginia Woolf’s ideal reader is now under siege by interactive technology, as we pursue a party on the page 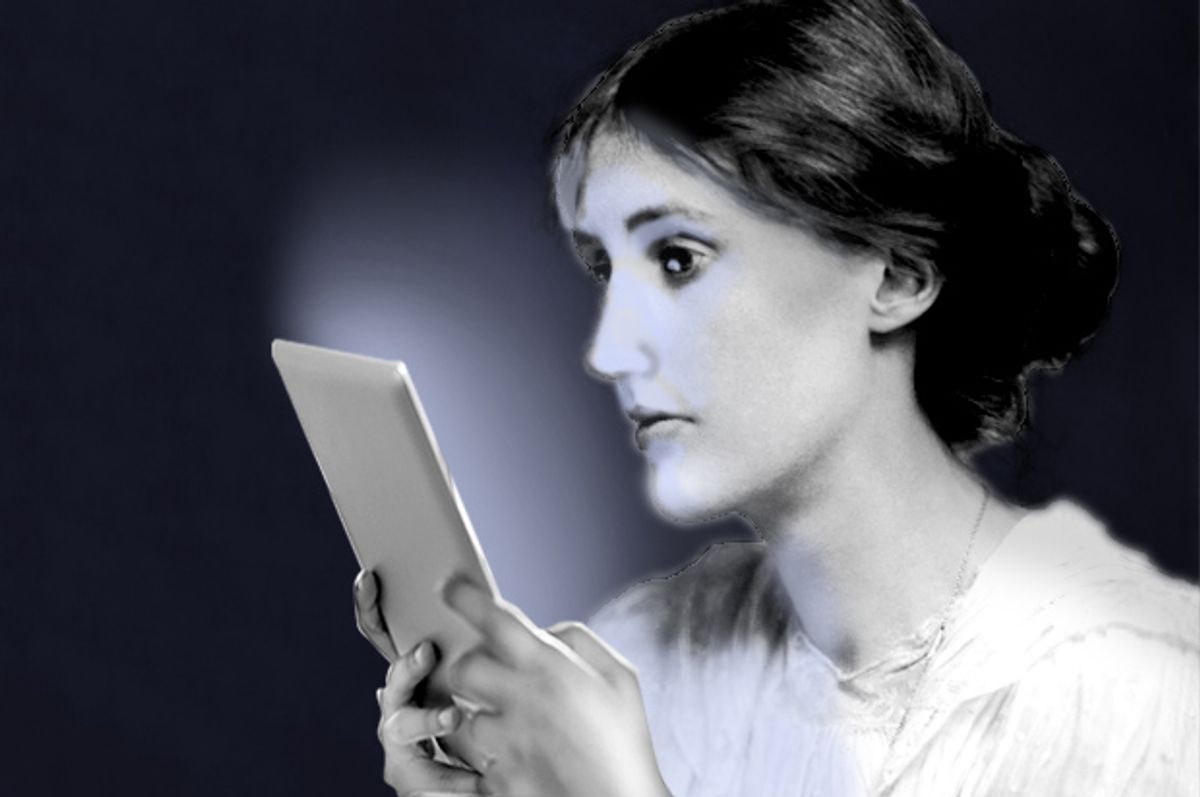 Virginia Woolf, writing to her pal Ethel Smyth, noted that “the state of reading consists in the complete elimination of the ego.” Hers was a 20th-century vision of a reader — someone who gets lost in books, someone whose identity is subsumed by the identity of another mind, a narrator. She’s describing a metaphoric experience: the reader becomes someone else.

York University psychologist Raymond Mar has done the MRI scans to back her up. We now know that when we’re reading novels, our brains light up as though we were experiencing the same things the hero experiences. When we read, we rehearse the lives of others. We are, in other words, exercising our empathy.

But Woolf’s ideal reader, who disappears as she reads and tries on alternate identities, is now under siege. Our stories are going social and, as new platform technologies remake the reading experience into something increasingly interactive, we now must ask what we’re giving up in the bargain.

I’ve spoken with enough “social reading” pioneers to develop a slightly creepy vision of tomorrow’s literary experience. For starters, authors will crowdsource their stories, gathering masses of feedback in order to plot out the second half of novels, plays and poems. (I know of at least one author whose fans already collaborate on upcoming books via an app.) The resultant stories won’t be static, either; the hero’s race and sexuality could shift, depending on your wont; your favorite fast food might get subbed in or a new watch that the GQ of 2047 thinks you should buy.

More than half of e-book buyers read stories on their smartphones. This, to me, suggests that we welcome steady streams of disruption and interjection when we read. But how does reading "Mrs. Dalloway" on the most connected device ever built compare with reading a paperback? Maryanne Wolf, a star neuroscientist at Tufts University who focuses on the reading brain, believes smartphones are “antithetical to deep reading.” And a 2016 Dartmouth College study found that reading on a digital device shifts someone's focus toward concrete details and away from abstract inferences and higher-level interpretations.

Wattpad — which is billed as YouTube for readers — is a massively popular site where users post and download free fiction. Solitary readers merge to become an enormous online community and writers post chapters as they’re written. Meanwhile, gone is Woolf’s notion of the solitary reader with a disappeared ego. Readers are very much engaged, offering corrections and advice and encouragement along the way. I met with the site’s co-founder, Allen Lau, at its headquarters in Toronto. “We’re doing something quite internet native here,” he told me. “The stories have become interactive.” Commentary and narrative are merging.

Could the advent of social reading replace the quiet empathy of solitary styles with different virtues? Poet Kenneth Goldsmith, who teaches a course at the University of Pennsylvania called “Wasting Time on the Internet,” thinks so. Goldsmith imagines an “electronic unconscious collective” whereby the fractal, interactive quality of the internet produces new, as yet unrecognized, creative expressions. And maybe he’s right. When papyrus first became cheap, there was a flowering of Greek poetry. Every new technology comes with opportunities for new voices, new styles.

But can Woof’s “elimination of the ego” survive the revolution? I doubt it. We can bet that whatever new writing and reading styles evolve over the next few decades, they will be leading us toward clicking and sharing, like everything else. We can bet they’ll lead us toward inserting the ego, not letting it drop away.

Maybe the Wattpads and Goldsmiths of the world really are developing a whole new kind of storytelling. If they are, it won’t be less valid. The social-media lens will not be less true, less authentic than the printing press lens we’ve been telling stories through for the past half a millennium. After all, who says novels are the ultimate reflection of real life? Real life is more like a Tumblr feed, I guess — scrolling past our bewildered gaze, barely meaning any one thing, barely inviting the empathy or solitude that Virginia Woolf loved. Then again, thinking about our stories as mere extensions of our manic, social days could be a mistake that we come to regret.

Michael Harris is the author of “Solitude: In Pursuit of a Singular Life in a Crowded World,” now out from St. Martin’s Press.