Coal use in the U.S. fell 9 percent in 2016, even as the Trump administration seeks a coal industry revival 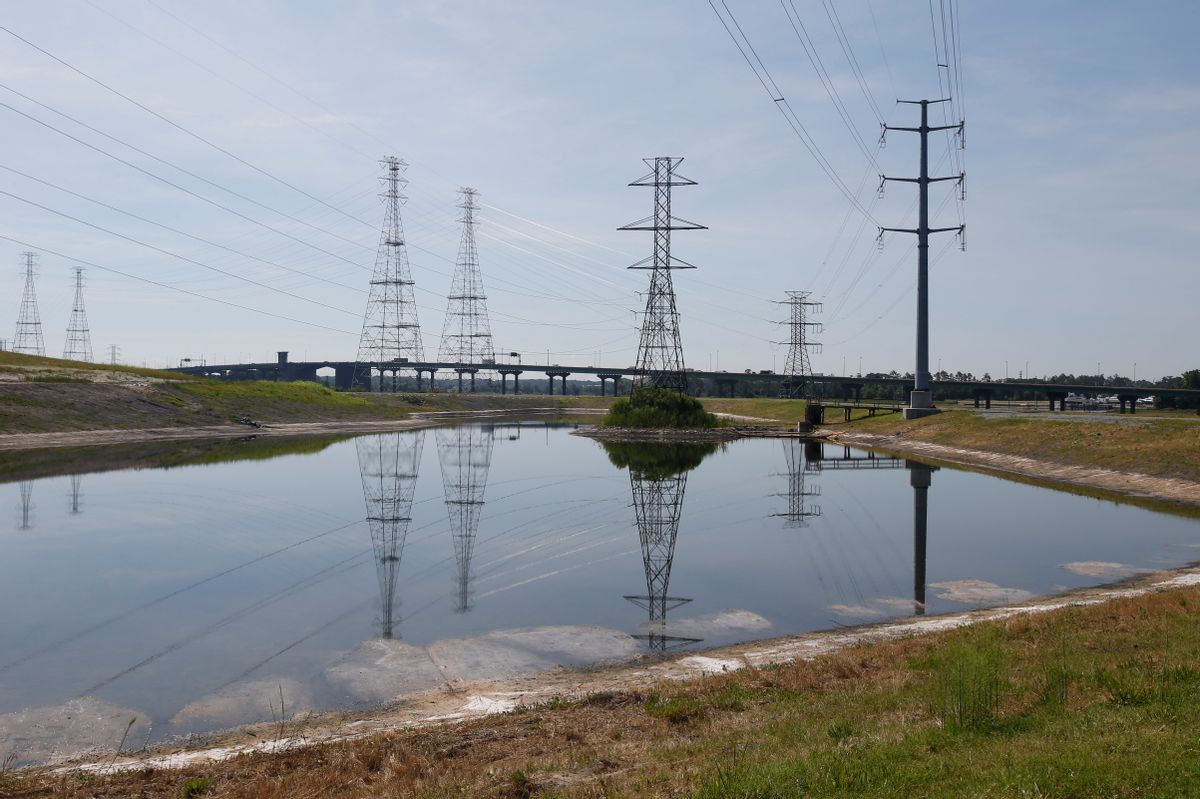 Power lines tower over a coal ash pond from an abandoned coal fired power plant in Chesapeake, Va., Monday, June 27, 2016. A lawsuit has gone to a judge over environmentalists claim that there are leaks of arsenic and other heavy metals into a river near Dominion's abandoned Chesapeake power plant in violation of the Clean Water Act. (AP Photo/Steve Helber) (AP)
--

Coal in the U.S. is like landline telephones and fax machines — it was everywhere decades ago, but tastes, technology and the market have moved on.

So it was little surprise when the federal government reported this week that U.S. coal use fell 9 percent in 2016, even as Americans consumed more energy overall. The United States used more natural gas and renewables last year than ever before, while oil use and even nuclear power were on the rise, too.

But coal? Not so much.

Coal use fell last year for the third year in a row — after slight increases in 2012 and 2013 — and has been steadily declining in the United States since it peaked a decade ago, according to U.S. Energy Information Administration data.

The ongoing decline is occurring even as the Trump administration promotes coal as a way to boost energy independence and bring back jobs, two goals that most experts say are fallacies.

Trump signed an executive order in March designed to remove “burdens” to coal and other fossil fuels development, taking steps to dismantle policies such as the Obama-era Clean Power Plan, which would cut climate pollution from fossil fuels.

Part of the problem for coal, however, is that Americans aren’t as hungry for electricity as they used to be, thanks in part to more energy efficient buildings and appliances. And coal’s greatest threat has come from another fossil fuel Trump is feverishly promoting: Natural gas.

Natural gas has been booming in the United States over the past decade because of fracking, which has flooded the country with cheap and abundant shale oil and gas. That flood was one of the reasons global oil and gas prices crashed in 2014.

Cheap prices along with federal mercury emissions regulations became big incentives for electric companies to build natural gas power plants and shut down their coal-fired power plants, or run them using natural gas instead of coal.

While the Trump administration blames the coal industry’s hard times on Obama’s climate policies, coal use in the United States started falling before Obama took office and has been trending downward ever since.

After years of switching from coal to gas-fired power plants, the United States hit a major milestone last year: 2016 was the first full year on record in the United States that more electricity was generated using natural gas than coal, according to Energy Information Administration data.

“I think the EIA data illustrates what we and others have been highlighting for the last few years — that coal is increasingly uneconomic compared to cleaner alternatives, particularly gas, but to a lesser and increasing extent, renewables,” said Jeremy Richardson, an energy analyst for the Union of Concerned Scientists.

Electricity generated using coal has long been America’s largest single source of pollution causing climate change. The Clean Power Plan was to regulate climate pollution from existing coal-fired power plants so that the U.S. could uphold its commitment to the Paris Climate Agreement. The pact’s goal is to prevent the globe from warming more than 2°C (3.6°F), heating that scientists consider dangerous.

Using natural gas to generate electricity emits about half the carbon pollution as burning coal. Drilling and fracking for natural gas, however, pollutes the atmosphere with methane, a powerful global warming gas about 34 times stronger than carbon dioxide over the span of a century.

Jonathan Koomey, an earth systems lecturer at Stanford University, said there isn’t much Trump administration policy can do to stop coal’s fall.

“The president has limited ability to revive coal, though he may delay its decline by a year or two,” Koomey said. “The powerful economic factors that have led electricity demand to be flat and alternatives to grow rapidly are unlikely to be affected by federal policies in the near term, though the administration may have some limited success in slowing the decline of coal in specific cases.”

Electric power companies show little enthusiasm for coal, even as the federal government promotes it. Reuters reported this week that of the 32 utilities operating in the states that sued to stop the Clean Power Plan, most have no plans use more coal anytime soon.

One of those is Xcel Energy, one of the Midwest’s largest utilities, which says it has retired 25 percent of all the coal-fired power plants it operated in 2005. The company’s goal is to cut its climate pollution by 60 percent by 2030.