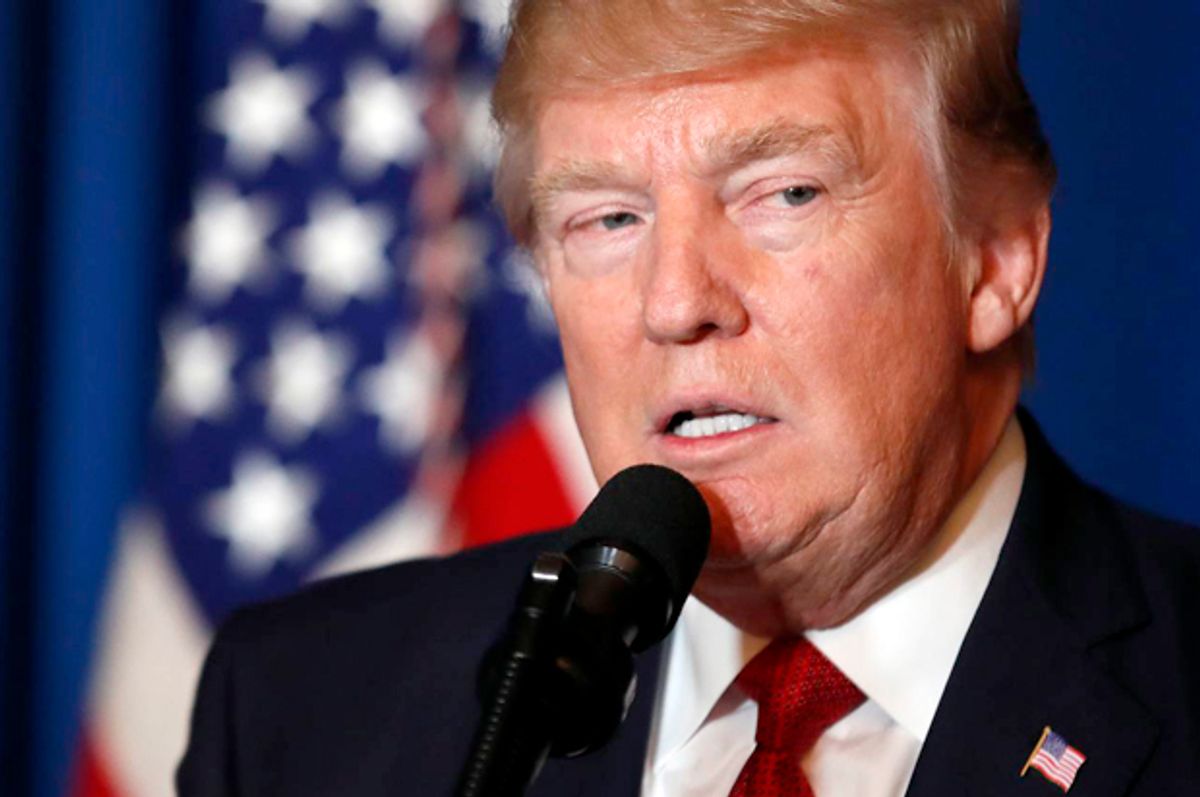 Last Thursday President Donald Trump ordered the United States military to fire dozens of missiles against a Syrian airbase in retaliation for that country's use of chemical weapons against civilians in rebel-held territory. A Reuters report described this attack as "the toughest direct U.S. action yet in Syria's six-year-old civil war."

On the other hand, because the Trump administration warned its Russian counterparts prior to launching the attack, the Syrian government had time to evacuate its forces and equipment from the area.

This military action has demonstrated once again that Trump is a flagrant and unapologetic hypocrite. During the 2016 presidential campaign, he repeatedly said he would not intervene militarily in Syria and criticized President Barack Obama's decision to do so.

This military action has demonstrated once again Trump's inconsistent public policy and unpredictable "leadership." As one of his first acts as president, Donald Trump attempted to bar Syrian children and other refugees from entering the United States. In February 2016 he told his supporters during a rally that he could look Syrian children in the face and say, "You can't come":

Look, we don't know where their parents come from. Their parents should always stay with them, that's very important, but we don't know where the parents come from, they have no documentation. They may be ISIL, they may be ISIL-related. It could be a Trojan horse. If 2 percent of those people are bad the trouble is unbelievable.

Trump's son Donald Jr. even went so far as to compare Syrian refugees to poisoned candy: "If I had a bowl of Skittles and I told you just three would kill you, would you take a handful? That's our Syrian refugee problem."

Now Trump is apparently so deeply shaken by images of dead and dying children that he has ordered an attack on the Syrian government, even though his "Muslim ban" sought to put those same innocent children in harm's way. Such a fact appears lost on Trump and his enablers.

This military action comes at a time of dangerous instability in the State Department. Because of Trump's desire for chaos, confusion and political score settling, hundreds of key diplomatic and other administrative posts remain unfilled in the State Department and elsewhere in the executive branch. Secretary of State Rex Tillerson is a man with no diplomatic experience, other than leading a multinational corporation and serving its desire for maximum profit by any means necessary. Tillerson did not want to be America's chief diplomat, according to reports. His wife, a Christian fundamentalist and "prayer warrior," apparently told Tillerson it was "God's plan" that he assume the office.

To this point, Tillerson's leadership has demonstrated his lack of credentials, interest and expertise in foreign affairs. In response to North Korea's launch of a medium-range ballistic missile on Tuesday, he issued a curt and puzzling statement: "The United States has spoken enough about North Korea. We have no further comment."

The role of commander in chief is a crucible that reveals a person's core character and temperament. What do we know about Donald Trump? He is a mendacious liar and a bully. He is proudly ignorant of public affairs and other matters. He is vainglorious, easily manipulated, hyperemotional, detached from reality, mercurial, petty, and according to psychologist Philip Zimardo, an"unconstrained, unbridled present hedonist.”

Trump's popularity among the American public is near record lows for a president at this point in his first term. Is Trump attacking Syria and expanding the war in the Middle East so as to gain a boost in the polls and distract the public and the news media from the growing Russia scandal? It is a sign of how little trust Trump and his administration have earned that such a question must be seriously contemplated.

The president's decision to order an attack on Syria is but one more reminder of how his presidency (and indeed his entire public life) has been a spectacular performance of the worst aspects of our common humanity. He is a carnival-show barker and pitchman who talks the rubes into the tent before selling them snake oil. He is a confidence man out of Mark Twain's novel "Pudd'nhead Wilson." He is like the host of a late-night infomercial who beckons the desperate and greedy to buy into a pyramid scheme. He is also a lot like a professional wrestling villain who knows how to get "cheap heat" from the crowd.

Trump resembles a character in a science fiction pulp magazine from the 1950s or an episode of "The Outer Limits" or "The Twilight Zone." In many ways, he is the literal embodiment of a scenario pulled from science fiction author Robert Heinlein's "Future History" series. Writing for The Huffington Post, William Bradley explained:

In his "Future History" series, Heinlein did point to a presidential election which occurs right about, well, now as the moment in which the United States falls into “a dictatorship of superstition.” The cause? The election, during the nation’s most tempestuous and combustible of campaigns, of an anti-intellectual, anti-science, anti-foreigner populist appealing to racists and fundamentalist Christians and uber-rich reactionaries who wins a narrow victory. In the last presidential election for 75 years.

The war in Syria is an international crisis and humanitarian disaster. It is also a highly combustible and dangerous situation given the influence of Russia and ISIS in the region. Instead of having a steady hand provided by competent and predictable leadership, the United States has as its leader a clown-king who wanted the title, the money, the fame and the honorifics but was ill-prepared for a job that by most indications he may not have wanted to begin with — except perhaps as a means of filling both his personal and family's coffers.

This is the embarrassing moment at which we have arrived as a nation. If you are not frightened and deeply worried by Donald Trump's actions on the world stage, it can only mean you have not been paying attention. In all, this is both a tragedy and a farce. Either way, Trump may now have his own version of what former Secretary of State John Hay described in 1898 as "a splendid little war."