Surprise! The twists in the “Homeland” season 6 finale pay off

The Showtime series has never been so relevant 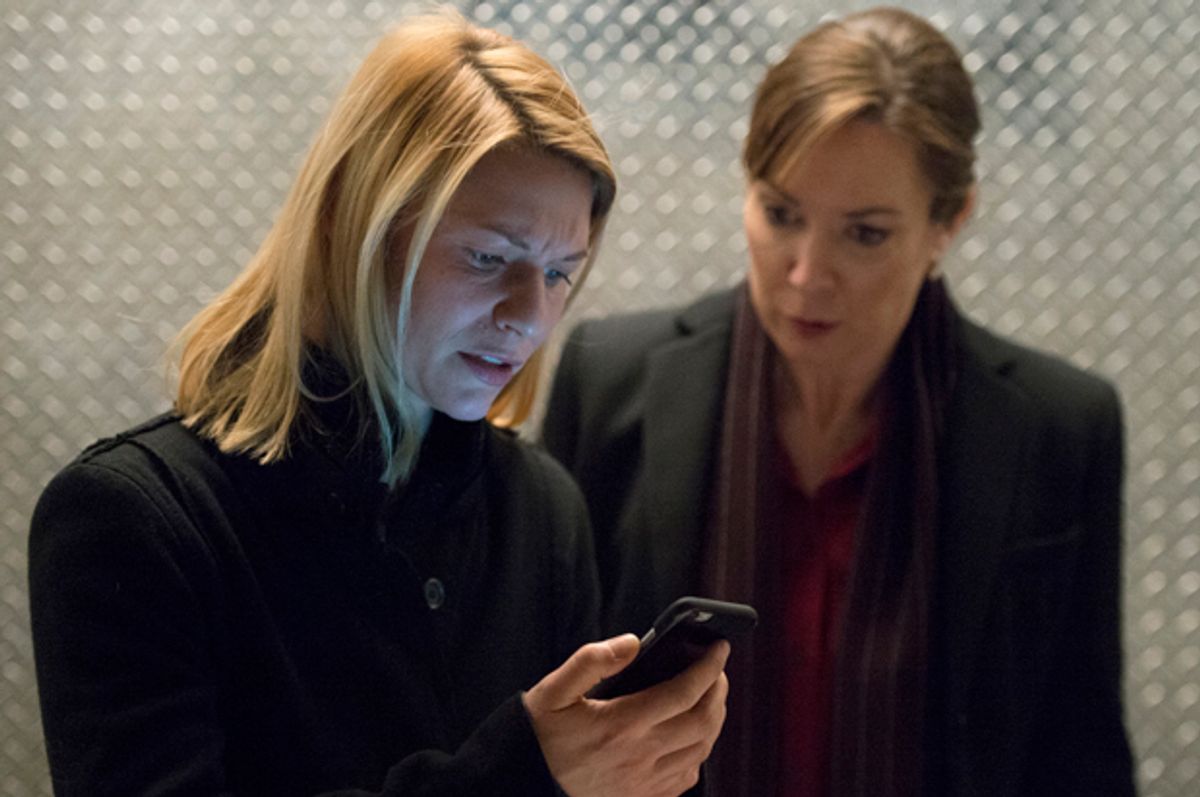 The DNA of the Showtime drama “Homeland” resembles that of a human: It is shaped like a helix. The show’s twists and turns can be both thrilling and frustrating; but for good and for ill, they are elemental, as central to the show as Carrie Mathison (Claire Danes), modern political motifs and explosions. So it should not come as a surprise that Sunday’s episode, the season 6 finale, contained a couple dramatic curlicues. More surprising is that the surprises were effective — the first as plot, the second as social commentary.

To recap the episode: The season’s primary narrative threads (and this is where spoilers begin) — a New York City bombing; Peter Quinn’s (Rupert Friend) tumultuous return to civilian life; the run-up to the presidency of a woman, Elizabeth Keane (Elizabeth Marvel), who promises to dial back the war on terror; and CIA Director Dar Adal’s (F. Murray Abraham) plot to thwart the president-elect and keep resources flowing to the intelligence community — coalesce in an assassination attempt on the president-elect. The attempt is orchestrated by Gen. Jamie McClendon (Robert Kneper) and is an outgrowth of Adal’s machinations. Carrie and Quinn are tasked with saving the president-elect’s life and they do so successfully; Quinn, however, is a casualty of the effort.

The death of one of the show’s protagonists is the first twist — though one that could be predicted. Quinn experienced a seizure that has left him depressed and physically weakened, and that has exacerbated his post-traumatic stress. The show gives him a dramatic hero’s goodbye, tying a bow on an arc that was growing stale and elevating the stakes of Keane’s presidency for Carrie.

After the dramatic incident, the show jumps ahead six weeks. Keane’s administration is in full swing and the polemical Alex Jones-like radio host Brett O'Keefe (Jake Weber) is raving about the danger the president poses to America. He criticizes her for doing the opposite of what she campaigned on and for bucking norms, like holding a public inauguration, in the wake of the assassination attempt. He prophesizes that America is headed toward a civil war.

O’Keefe’s rant sounds like standard inflammatory far-right fare. But the second twist is that his worries prove to be well-founded. Keane may not have been literally killed in the assassination attempt, but the event is effective in killing the things that make her a maverick. She has Carrie quell concerns that her administration is about to overstep the Constitution in an effort to hunt down anyone connected to the assassination attempt — and then the president does just that. She has officers forcefully apprehend anyone who has had any sort of contact with Dar Adal, including Saul Berenson (Mandy Patinkin).

Carrie is outraged by the betrayal and abuse of power. She hurries to the president’s office (she is in Brooklyn one moment and D.C. the next; does she teleport?) and beseeches President Keane to listen to reason. Keane’s advisers tell Carrie that Keane is unavailable. But the camera pans to the inside of the Oval Office, where Keane is alone, listening straight-faced to Carrie plead. When Carrie leaves, President Keane resumes reading from her iPad. Being president is portrayed as a lonely, isolating business.

The presidency has long been understood to change the occupant of the office. But the show is commenting less on the weight of the office than on the weight of the moment. Keane is a politician distinct from the two in real life who ran for office in 2016. She is sharp, qualified and dignified, making her Trump’s antithesis. And though she served as a junior senator in New York and her résumé resembles Hillary Clinton’s, her politics and persona sharply diverge from Clinton's. Her candidacy was built on limiting surveillance and scaling back the military-industrial complex and the espionage wing of the government. And as Marvel explained to me in a recent interview, she based Keane’s persona on former President George W. Bush’s energy and Attorney General Bobby Kennedy’s speaking style; she did not incorporate Clinton into the calculus of the role.

Keane’s slip towards authoritarian tendencies creates a bizarro world that might lead liberals to consider, just for a second, that they and their team are not unimpeachable in America’s current low point. How would liberals feel if mad crowds chanted. “Not my president!” at their candidate? What if the far-right radio host isn’t crazy?

Maybe the thought experiment loses its effectiveness after that second question. The qualities that make Keane’s shift sinister are Trumpian. So any crisis of political identity should be short-lived. But the episode is trying to inspire political empathy and that is a noble urge and one that is rare in modern drama.

The greater point that the show makes about modern politics, though, is about the insidious effect of deep polarization and fear. Keane betrays her ideals because the attempt on her life has scared her. In office, she governs out of fear and the result is that Americans lose freedoms and the democracy suffers. The finale is titled “America First.” It isn't so much a rebuke of Trump as of the origin of Trump’s appeal. Separating Trump’s most dangerous qualities from Trump’s bombastic persona is a clever twist on reality — one that ought to lead all Americans to second-guess their assumptions but that will make them only more inclined to see what turns ensue in season 7.