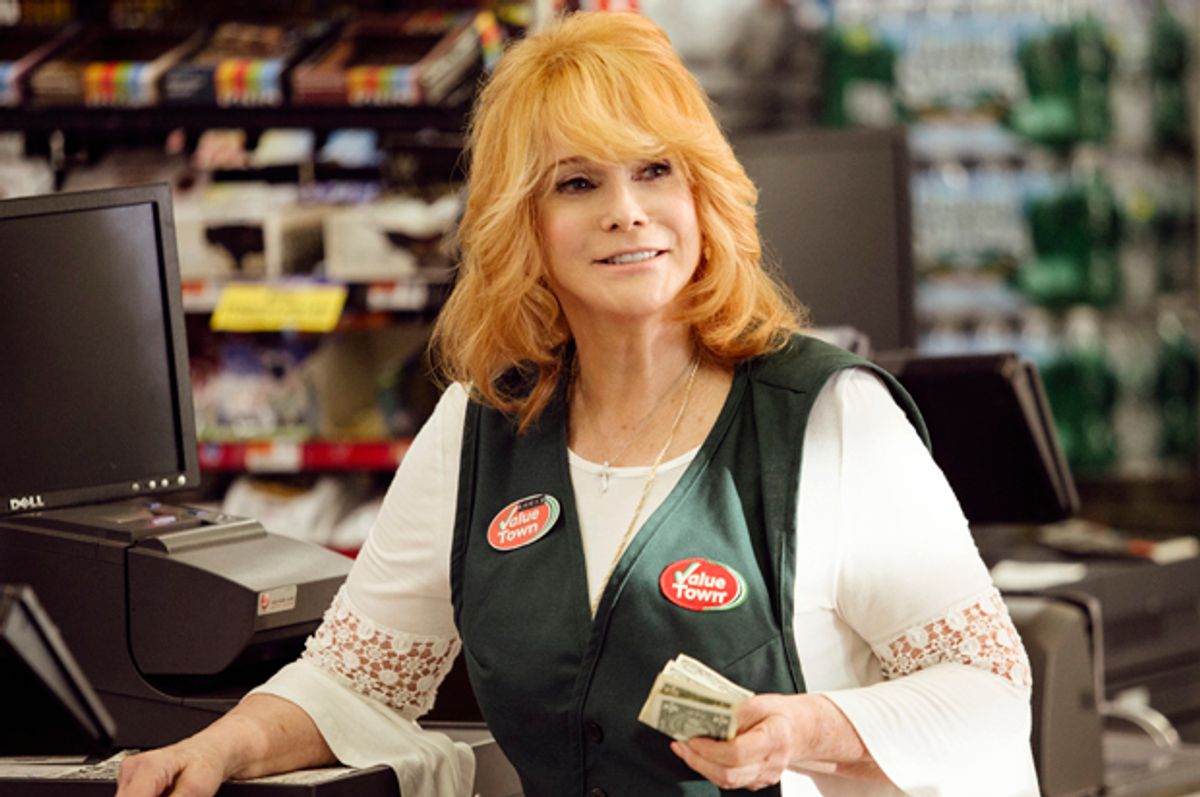 Old people do the darndest things — like rob banks. That’s the premise of “Going in Style,” the latest directorial effort from Zach Braff (“Garden State”), in which a trio of Oscar-winners steal from the rich just in time for the early bird special at Denny’s. A remake of Martin Brest’s 1979 film of the same name, Joe (Michael Caine) finds himself unable to make his house payments after he’s laid off from his job and denied pension due to company restructuring. Joe turns to a life of crime to keep a roof over his head, enlisting former coworkers Willie (Morgan Freeman) and Al (Alan Arkin) for the job.

Braff’s film, which was written by Theodore Melfi (“St. Vincent”), can’t decide if Joe and his buddies are really smart or really dumb. Their plan is certainly ingenious: To earn back their retirement, the men stage a heist during a fundraiser for their local American Legion. It’s the perfect alibi. In a particularly clever move, Al installs a trap door in a Port-a-Potty located next to a security camera. As far as the police are concerned, he spent an hour on the john. Al blames his absence from the fundraiser on a nasty case of diverticulitis, rather than the fact that he was making off with a small fortune.

But here’s the rub: The men, who disguise themselves as the Rat Pack (in a nod to the original “Ocean’s Eleven”), successfully pull off the job — despite a close call when Willie suffers a panic attack. They even evade the nagging suspicions of an FBI investigator (Matt Dillon) convinced they’re behind the holdup. Why then do they start handing out their earnings to their friends like Mardi Gras beads? Joe leaves his favorite diner waitress (Siobhan Hogan) a $10,000 tip and drops off an anonymous briefcase full of cash for the boys at the lodge.

Anyone who has ever seen a heist movie knows that robbery money is extremely traceable. Unless the waitress is going to set up a Cayman Islands account, Joe might as well have just announced “I Did It” with a skywriter. Through the power of movie magic, though, the cops don’t bother tracking the loot.

There’s a Three Stooges element to the proceedings that appears to be pandering to the film’s assumed core audience of CBS viewers, but even the biggest “Two and a Half Men” fan deserves better than this. To prepare for the big show, the prospective burglars steal food from their local supermarket, as if there aren’t security guards watching their every move. Al, stuffing a chicken under his shirt, isn’t able to run very far before he begins to get winded and is apprehended. Willie and Joe have better luck, stealing a shopping scooter and high-tailing it down the road like a juiced-up getaway car.

Hollywood has a bad habit of underestimating the intelligence of people over 60, churning out movies that treat them like wrinkly buffoons who are constantly falling asleep, complaining about their bunions, or involved in wacky hijinx. The elderly may as well be a different species.

The most egregious example of the Old People Behaving Badly genre to which “Going in Style” belongs is “Last Vegas,” a bachelor party movie that makes Braff’s film look like “Wild Strawberries” in comparison. Directed by Jon Turteltaub (“Disney’s The Kid”) with a script from Dan Fogelman (“This Is Us”), the 2013 spin on “The Hangover” is a compendium of every lazy old person joke in the books. A group of childhood friends (Kevin Kline, Robert De Niro, Morgan Freeman) reunite for a trip to Sin City when their buddy (Michael Douglas) proposes to a woman decades his junior (Bre Blair). His pals plan to cut loose, so long as they can remember to take their Viagra.

Kline, playing the unhappily married Sam, gets saddled with all the worst material. While attending water aerobics classes at the local senior center with his saintly wife (Joanna Gleason), Sam comments that he thinks he stepped on the breast of the woman next to him. His spouse gives him a pass to hook up with one lovely lady on their trip. What happens in Vegas — well, you know how it goes. A potential hookup asks Sam if he’s good in the sack. “I don’t remember,” he responds. Another inquires if he has drugs. Sam asks if Lipitor counts. (Spoiler: It doesn’t.)

Throughout the film, Sam and his friends are portrayed as out-of-touch fogeys unaware of the cultural space they occupy. They don’t know who Curtis “50 Cent” Jackson is. The elders think he’s a member of the Jackson 5. Upon meeting one of the members of LMFAO, they refer to him as “Mr. Redfoo.” Sam meets a Madonna impersonator (Roger Bart) and isn’t aware the drag queen — who has noticeable stubble, mind you — isn’t 100 percent female.

Elderly moviegoers are just like any other segment of the public. They want to be portrayed with depth and intelligence, but the problem is that there are too few movies that recognize the existence of people over 60 and even fewer that do so with respect. “Last Vegas” and “Going in Style” play to the lowest common denominator, but there’s not much else out there.

A survey from the Annenberg School at the University of Southern California found that just 11 percent of all characters in 2015’s highest grossing films were over 60 — despite the fact that older adults make up nearly 20 percent of the population. Of the top 100 movies of that year, just 10 had senior actors as leads or co-leads. The study found that films which did portray the lives of older adults too rarely did so with dignity. More than half of movies with people over 60 in them included ageist comments, with elderly characters referred to conversely as “senile old men,” “frail old women,” or “relics.”

“Seniors are rarely seen on screen, and when they are, they are ridiculed,” concluded USC’s Dr. Stacy L. Smith in regards to the university’s findings.

There are a litany of examples in cinema of over 60 being treated with condescension — and even outright malice — but we will isolate a few. “Driving Miss Daisy,” yet another movie that Morgan Freeman is far too good for, treats racism as an adorable quirk of an elderly white woman. It portrays the wisdom of old age with the subtlety of a brass knuckle street fight. “The Bucket List” was excoriated by the late critic Roger Ebert upon its release for depicting a cancer diagnosis as just another wacky misadventure. M. Night Shyamalan’s “The Visit” exploits our fear of the elderly for some adequate jump-scares.

If you want a better movie about old age, they do exist. They just don’t receive the same attention — or nearly as wide a release — as fare like “The Best Exotic Marigold Hotel,” in which old white people get their groove back in postcolonial India. A good start is “I’ll See You in My Dreams,” a deeply felt comedy in which a widow (Blythe Danner) attracts the courtship of two wildly divergent suitors (Martin Starr, Sam Elliott). Michael Haneke’s “Amour,” should you be able to stomach it, is the most brutal and honest film about commitment ever made.

When “Going in Style” isn’t busy nyuk-nyuk-nyuking it up, there’s about 20 minutes of solid material in the film. Ann-Margret plays Annie, a single woman with her eye on Al, a saxophonist who used to frequent Greenwich Village cafes in the 60s. Annie bluntly informs him that the two can play jazz together anytime. The 75-year-old actress (who, it must be noted, looks absolutely incredible) is like a flashlight in the dark, an ever-radiant screen presence. She and Arkin have a relaxed, wry rapport that would have made for a terrific late-life comedy of manners, one in which two people shag their way into romance.

That’s a great concept for a movie — in which the passions and desires of people over 60 are depicted without an implied whoopie cushion. It’s too bad Hollywood seldom bothers to make it.