"In the perfect world, my self-portrait would be a picture of my ass": The artist Maurizio Cattelan speaks with Salon

The provocative subject of Maura Axelrod’s documentary “Maurizio Cattelan: Be Right Back” agrees to an interview 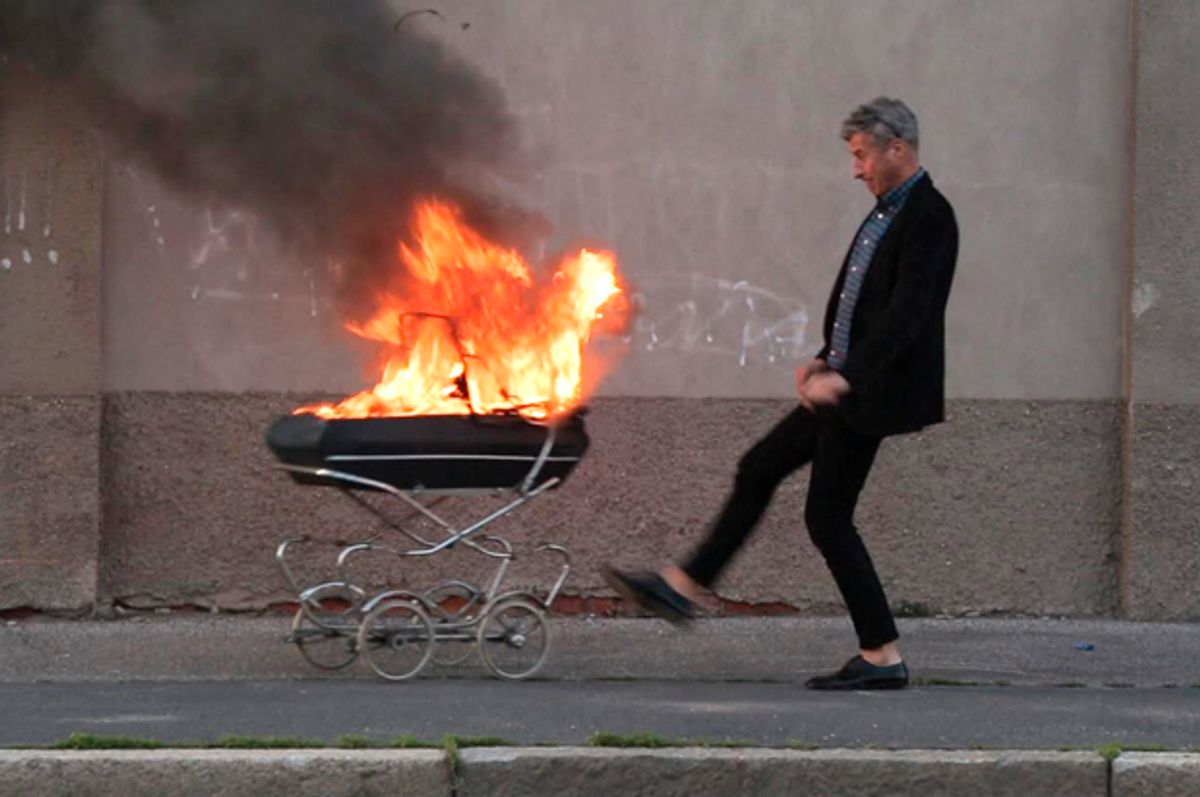 A still from "Maurizio Cattelan: Be Right Back" (Bond)
--

Is Maurizio Cattelan an artist or a con artist? Can’t he be both? This is one of the intriguing questions raised in Maura Axelrod’s superb and playful documentary, “Maurizio Cattelan: Be Right Back.”

For anyone unfamiliar with the artist/provocateur, the film’s subtitle comes from an exhibit where Cattelan actually avoided making anything. He simply hung a sign that read “Be Right Back” on the door of an empty gallery. It emphasized what was described as “his perpetual refusal to show or create work.”

However, when Cattelan does create sculpture — watch out! His most controversial work “La Nona Ora” (“The Ninth Hour”) has Pope John Paul II hit by a meteorite. Other pieces include “Bidibidobidiboo,” which features a squirrel committing suicide at a miniature kitchen table, and “Him,” which is best left for viewers to discover. His sculpture titled “Trophy Wife” delivers a great sight gag, as does the piece “L.O.V.E.,” which he boldly exhibited outside the Milan stock exchange.

Yes, Maurizio Cattelan is a naughty prankster. He has both stolen other artists’ work and passed it off as his own, and once claimed his exhibition was stolen, and hung the police report he filed as the entire installation.

Admittedly press shy, the artist declined to speak with Salon on the phone. He would only meet in person (which was not viable), or do an email exchange. This interview below is the transcript of our emails which may — or may not — have been answered by Cattelan himself. Given his proclivity to do as little as possible in the name of art, what can we believe? And does it really matter?

Maurizio, congratulations on your film and your success. I am sure the documentary will bring you more fans. Some folks will be outraged. Some will be amused. What do you want people to take from your work and the film?

Well, I expect people will hate it, and they will be so grateful that the film is over that they will go back to their lives with a renewed sense of purpose. I hope they see the film and then go home and hug their children then spite their enemies.

Your work has been called disruptive and disrespectful. You challenge people to determine what they can bear to look at. While your art goes far, it never really goes too far. Is there too far, or a line you won’t cross?

I would never make fun of anyone who is obviously disabled who cannot defend himself, like Donald Trump.

It seems as if you feel a pressure to top yourself with each new piece you create. For someone who tried hard to not make art, what inspires you to do something bigger, bolder, or brasher than what you’ve done before?

I don’t see it that way, actually.  The works are just in a spot where there was a void to be filled. The noise is the shock of what was missing.

You use your visage in your work, which creates a sense of identity, or provides a glimpse into your personality.  What would your self-portrait look like, of how would you want your obituary read?

In the perfect world, my self-portrait would be a picture of my ass, and my obituary would say, “He walked backward through his life, and he showed us the way.”

Let’s talk about authenticity. You are good at faking things, such as creating lifelike works, like taxidermied dogs, or hoaxes, such as the fake covers of Flash Art magazine you made and distributed. What can you say about the truth, the meaning and the value of art?

If you are searching to figure out what is true and what is not, you will have a sad life. It means you have too much time, and you should do a hobby — like collecting art.

Speaking of value, there is a segment in the film devoted to the auction of your work. You have commanded millions of dollars for your work, which some folks might be stunned to learn. How gratifying, and how unexpected it is to have others appreciate your work so highly?

I’m [always] surprised. I think there must have been an accident. I never tried to make money — just enough to be able to eat.

You insisted on doing an email exchange since we could not meet face to face. How can I trust that you are answering these questions, and not having some proxy do it for you?

Hmmm. . . how do I know that you are not fake news? The fact that you are asking makes me think you are trying to divert the attention.

Your art often revolves around the theme of “escape.” You challenge art making, and ask people to view your work (and by extension) the world, in a new way. What observations do you have about creation, presentation, representation, and consumption of your work?

Excuse me, I have to step out for a minute. Stay there. I’ll be right back.