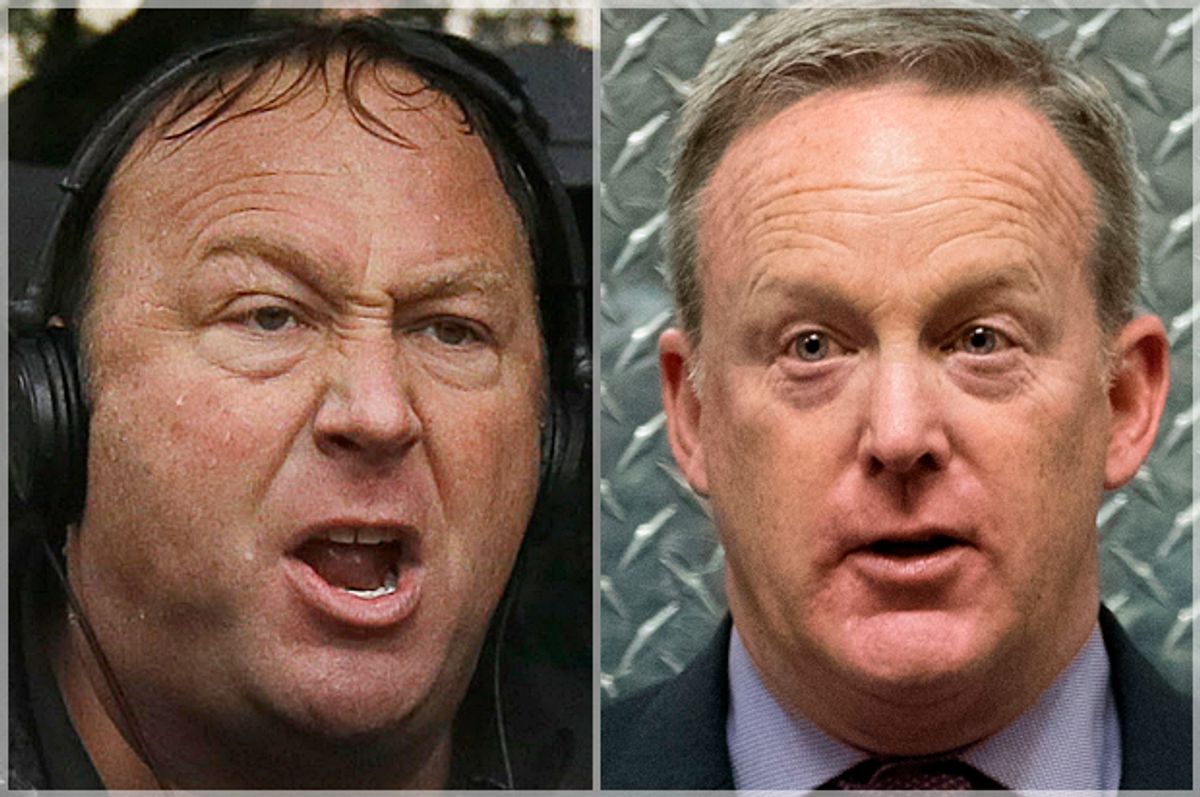 Sean Spicer may be a legend in Donald Trump’s White House, but he’s losing the support of one of Trump’s biggest fans.

Alex Jones, the wingnut radio host who makes Rush Limbaugh seem nice by comparison, called out Spicer on Tuesday, saying he and the White House press office were “historically ignorant.”

"What the hell is that from Sean Spicer?" Jones screamed in response to Spicer’s claim that Syrian President Bashar Assad was worse than Adolf Hitler because the German dictator did not “sink to using chemical weapons.”

Yes, the man who claimed a Washington pizzeria housed a front group for pedophiles and who thought that the U.S. government staged the Sandy Hook Elementary School shooting believes that Spicer’s comments went a step too far.

Like many others, Jones hit on the fact that Spicer seemed to ignore that the Nazis had used chemical weapons to systematically exterminate millions of people, most of them Jewish, during the Holocaust.

Jones tried to defend Spicer, saying the White House spokesman “meant, like, not dropping gas on people” — a tone-deaf remark to anyone who considers Jews, POWs, ethnic Poles, Romani nomads, the physically and mentally disabled, gays and others as “people.”

As Jones tried to stand up for Sean Spicer, his right-wing conspiracy website Infowars was busy slamming the Anne Frank Center for Mutual Respect, the New York-based human rights organization that called for Spicer’s immediate resignation.

Calling the 58-year-old organization “phony,” Infowars lashed out at the head of the group, Steven Goldstein, for using the Holocaust and the story of Anne Frank, “to argue for all Democratic policies, especially open borders and the bringing in of unlimited refugees.”

Meanwhile, following Spicer’s remarks, some of the country’s bigots, including Holocaust deniers and Spicer apologists, have taken to the internet to weigh in.

“The Holocaust lie is falling apart,” said one anonymous comment beneath the Infowars piece. Other comments echoed Jones’ insinuation that what Spicer really referred to was the use of chemical weapons in the field of battle (instead of inside concentration camps), while others took the opportunity to spew the usual stereotypes about Jewish people.