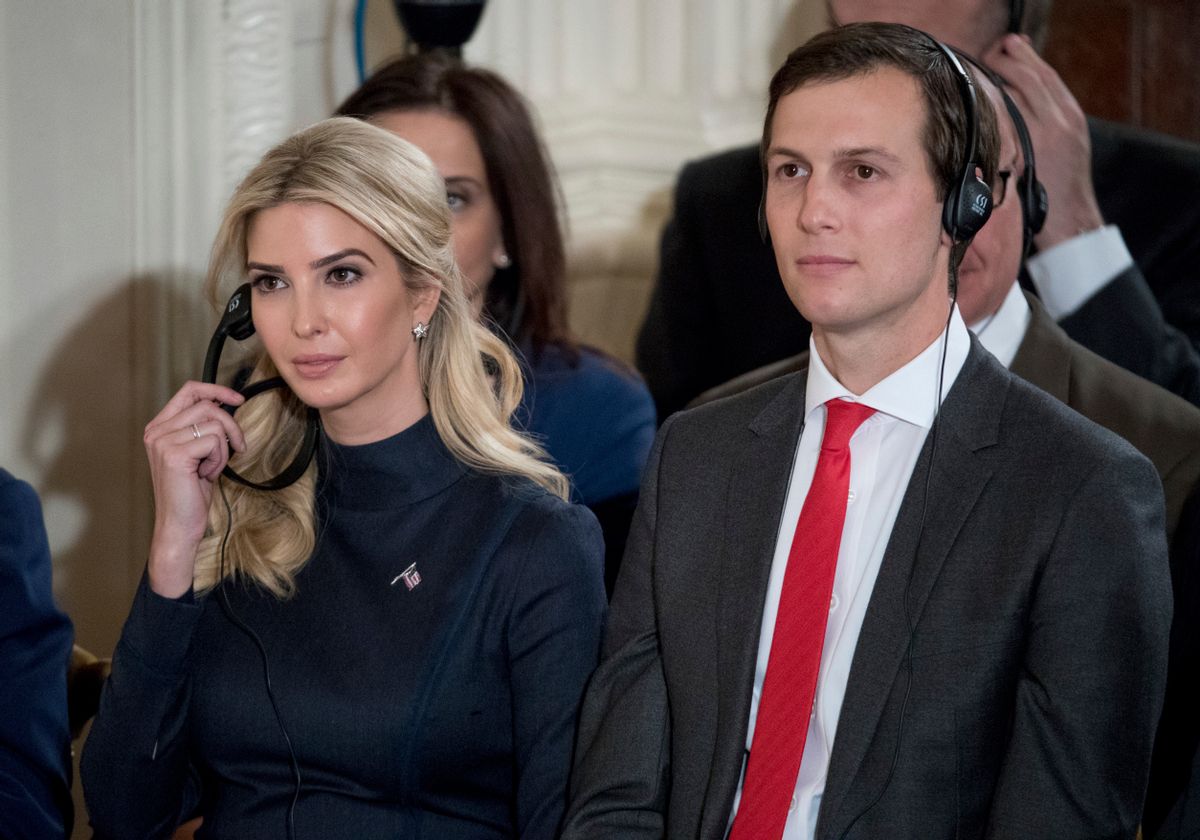 FILE - In this March 17, 2017, file photo, Ivanka Trump, the daughter of President Donald Trump, and her husband Jared Kushner, senior adviser to President Donald Trump, attend a news conference with the president and German Chancellor Angela Merkel in the East Room of the White House in Washington. Kushner has been a power player able to avoid much of the harsh scrutiny that comes with working in the White House, but he's found that even the president's son-in-law takes his turn in the spotlight. (AP Photo/Andrew Harnik) (AP/Andrew Harnik)
--

Much attention has been focused recently on President Trump’s “new” foreign policy.

The National Security Council has also been restructured. Former Director Michael Flynn resigned after lying about his meetings with the Russian ambassador to the U.S. Deputy K.T. McFarland was cashiered and became U.S. ambassador-designate to Singapore. They have been replaced by retired General H. R. McMaster as director, and his deputy for strategy, Dina Powell. The removal of Trump adviser Steve Bannon from the principals committee of the council also represents an apparent move to follow more traditional foreign policy-making.

What is driving this apparently positive change? The movement toward an apparently more traditional approach suggests the greater influence of Trump’s daughter Ivanka, who was recently named a regular employee of the White House, and her husband Jared Kushner, a senior adviser to the president over Bannon. Both may be trying to repair what “The Gatekeepers” author Chris Whipple has called “the most dysfunctional White House chief of staff and presidency in U.S. history.”

The two family members have strengthened a White House faction Bannon describes, not admiringly, as the “New Yorkers” or simply “Goldman Sachs.” Bannon himself leads an opposing faction that is more nationalist, isolationist and populist.

However this rivalry plays out, what has been clear during the “honeymoon phase” of the Trump presidency is that influential individuals have created an incoherent, impulsive style of governance, dominated by personal decision-making processes, such as the overnight decision to bomb Syria. This spasmodic style, ignoring interagency reviews, is new in the modern presidency, even among presidents like Kennedy and Clinton, who involved family members in their administrations. Trump relies on personal relationships, rather than the institutions of democracy.

As a comparative political scientist who studies different types of governments, I’m interested in how personal rule linked to family can erode democratic institutions in favor of authoritarianism. Academics call this “sultanism.”

It was over a century ago that the famous political sociologist Max Weber developed the concept of sultanism, which, he wrote, “operates primarily on the basis of discretion.”

“Sultans,” or kings, of the Ottoman Empire were absolute rulers, their power made legitimate by theology. They used arbitrary and despotic powers. Their lifestyles were lavish and decadent. And over time they lost their power. While rival European empires such as the Hapsburgs’ Austro-Hungary and Weber’s native Germany were rising in the 19th century as they developed impressive civil and military bureaucracies and procedures, the Ottoman Empire was declining.

Alfred Stepan and the late Juan J. Linz of Columbia University argued that sultanism is both a regime type (like democracy and authoritarianism) and an adjective describing a style of personal rule that is possible under all regime types, including democracy. They wrote:

“The essence of sultanism is unrestrained personal rulership … unconstrained by ideology, rational-legal norms, or any balance of power.”

Sultanism, in other words, is most common under authoritarian and autocratic rule, but it can also be present in democracies, when leaders personalize decision-making instead of following established institutional or legal processes.

Some might assume it irrelevant to compare any U.S. leader to classic sultanistic rulers such as the Duvaliers of Haiti, Ferdinand Marcos of the Philippines or Joseph Stalin of the Soviet Union. These regimes were nondemocratic and dominated by a single personality with family members intensely involved.

However, like the U.S., South Korea is a democracy and its president, Park Geun-hye, was impeached Dec. 9 for corrupt activities, many connected to a close family adviser. The adviser, allegedly a shaman, is herself the daughter of another Rasputin-type religious figure who had also secretly advised the president’s father during his 18 years in office.

Another example can be found in Nicaragua. President Daniel Ortega — who packed his Supreme Court to allow him a third consecutive term — has as his vice president his wife, Rosario Murillo. She is one of the few leaders he trusts, having alienated much of his party.

For its part, the U.S. has had sultanistic tendencies of its own in the past.

President John F. Kennedy’s closest adviser and his attorney general was his younger brother, Robert, indispensable during the perilous time of the Cuba Missile Crisis. And JFK, while in office and sometimes with his brother Robert involved, took enormous risks in having flings with women with dubious political connections - from a socialite with links to the mob to a possible East German spy. This is not mere indiscretion.

The reaction of Congress to all this was to pass, in 1967, the Anti-Nepotism Statute — nicknamed the “Bobby Kennedy Law” – to make sure close relatives no longer assume official positions. Some suggest, however, that the law does not exclude unofficial advisers.

Another example of sultanistic practices is Hillary Clinton, who was her president-husband’s lead and unpaid adviser on health care reform.

These Bush-era “law-free” zones in national security matters, which some have called dictatorial, were based on the legal concept of the “unitary executive.” The idea is that the judicial and legislative branches cannot check or regulate the president on “executive” matters, especially those involving national security.

The unitary executive facilitated sultanism by asserting that the president monopolizes all executive power, however exercised. As some noted constitutional scholars have said, this theory basically places the president above the law.

Most modern American presidents have risen through the institutions of U.S. democracy — state political parties, Capitol Hill, the military. They have been vetted and embedded in institutional rules, attitudes and relationships. Someone like Trump, coming in “from the cold,” in contrast, brings his family and close associates and makes decisions outside of those formal and informal institutions.

Having masterminded his unexpected victory based on an unconventional campaign, Trump has already shown a tendency to trust his instincts on major decisions of governance, creating impulsive, unpredictable decisions. His past record as CEO and his outsider status make Trump self-reliant and assured that most of the world is misguided and only he and his few trusted advisers, including his family, have the answers.

When questioned, for example, on his pledge to ban Muslims from entering the country “until our country’s representatives can figure out what is going on,” Trump said:

“What I’m doing is no different than FDR. If you look at what he was doing, it was far worse … and he’s one of the most highly respected presidents — they name highways after him.”

Here Trump was evoking the 1944 Korematsu decision, which upheld almost unlimited executive powers over immigration to permit the detention of Japanese-Americans without any evidence (and none existed) of subversion. This decision is considered by many constitutional scholars as the most ignominious in Supreme Court history, a “tragic mistake that we should not repeat.” Even the late Justice Antonin Scalia disavowed it as an “error.”

The U.S. presidency has always been prone to sultantistic tendencies, but under a Trump presidency what were once isolated incidents have predictably become a way of governing. When the closest advisers, both institutional (like Ivanka and Kushner) and informal (in the case of his two adult sons), are dominated by family members, the decision-making process will not only be erratic and possibly influenced by private family interests but also tend to ignore legal procedures that have also met the test of time.

Instead of a “team of rivals” under the rule of law, the Trump presidency may be akin to medieval monarchy, with decisions made by court politics, not legal procedures.