Ahead of a key special election, voters in Tom Price's old district are rebelling against partisanship and Trump 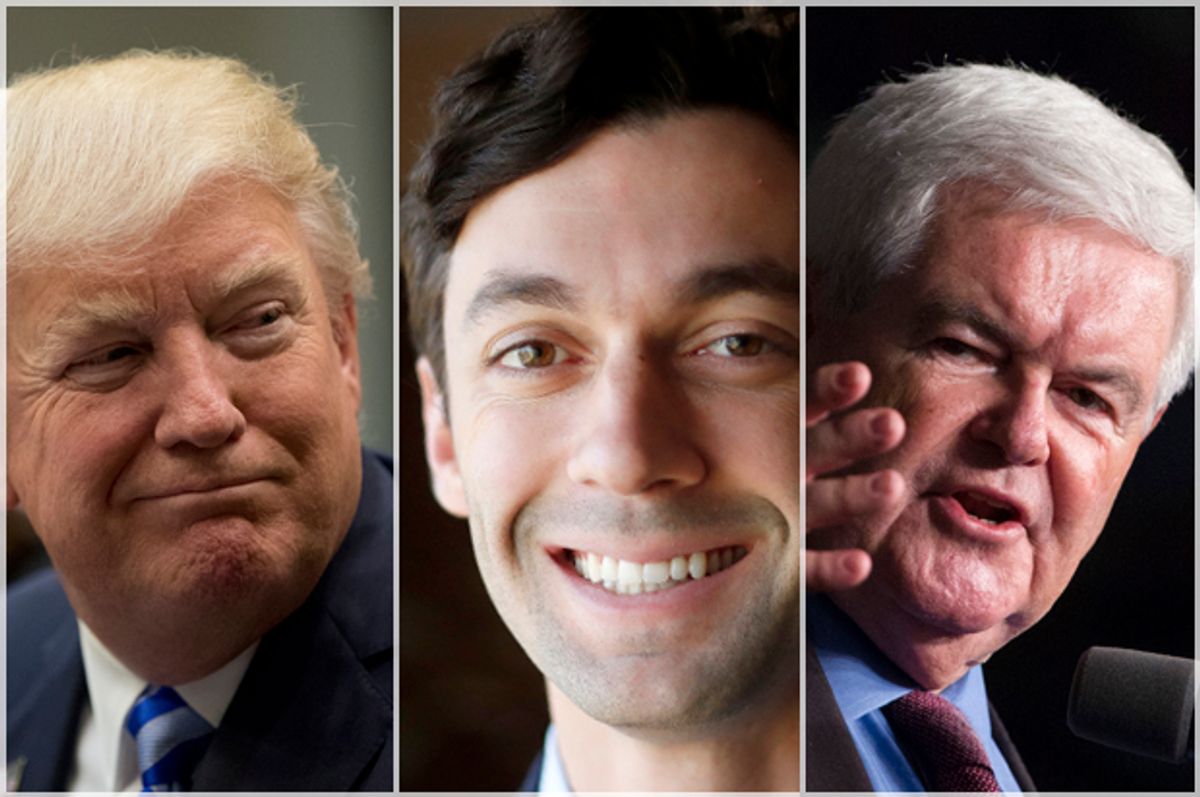 CHAMBLEE, Ga. -- Looking at just the history, the case for a Democratic victory in the special election in Georgia’s 6th Congressional District is thin. The district has voted for Republicans stretching all the way back to 1978, when Newt Gingrich first won the seat. In the years since Republicans have won re-election in the district by large margins. Tom Price, who vacated the seat to become President Donald Trump’s secretary of the Department of Health and Human Services, first won the district in 2004 running unopposed. And he has brushed off all Democratic challengers since then, never once having less than 60 percent of the vote.

But with Price gone and Democrats looking to take out some political frustration with Trump, the race in Georgia’s 6th Congressional District has taken on national significance. Democrat Jon Ossoff, buoyed by local activism and a flood of outside money, is working to pull off an upset on April 18. If Ossoff can take home more than 50 percent of the vote as he faces a fractured Republican field, he’ll win the seat outright. If he falls short of that figure, he’ll have to make it through a June runoff against a single Republican opponent.

Where the Democrats see their opportunity is in the yawning disparity between Tom Price’s 2016 margin of victory in the district and Trump’s. Price was re-elected in November with a 23-point spread, but Trump carried the district only by 1.5 percentage points over his rival Hillary Clinton. In the 2012 presidential election, Mitt Romney won the district with 61 percent of the vote to Barack Obama's 37 percent.

So why did the 2016 race in Georgia’s 6th Congressional District result in so much ticket splitting in what has historically been extremely favorable territory for the GOP? The answer is complicated, but the abridged version is because demographics in the district are changing and certain flavors of Republican voters despise Donald Trump.

“That area has changed; it’s changing,” said Dante Chinni, director of the American Communities Project at George Washington University. “Increasingly it is the kind of district that looks like a bad fit for the Trump Republican Party.” Georgia’s 6th Congressional District is largely white but becoming more diverse. And it’s full of wealthier, more educated voters who just aren’t that receptive to Trumpism or actively recoil from it.

“I loved George W. [Bush], but I could not vote for Donald Trump,” Vicki Ingram, a retiree in the district told me. Ingram was one of the people who split their ticket in 2016; she voted against Trump but for Tom Price. Most of the Republican candidates running to replace Price had alienated her with negative campaigning, so this week she attended a Jon Ossoff event at the encouragement of her husband. “I’m sick to death of both parties,” she said, before mentioning that she liked Ossoff’s positivity. When I asked if she could see herself voting for the Democrat, she said, “Absolutely.”

On Thursday morning I tagged along on a canvasing trip with Jim Lester, a gregarious 66-year-old Ossoff volunteer who manages rental properties. (He spent the trip doing on-the-spot housing inspections of the exteriors of the homes we visited; most of them failed.) Lester told me he was drawn to Ossoff because the candidate “is very Kennedy-esque,” adding, “I perceive him to be a moderate.” A Democrat, Lester voted for Hillary Clinton in the general election but had cast a vote for John Kasich in Georgia's Republican primary. That was a strategic vote, he said, to try to deny Trump a win in the state. But Lester added, “I could be very happy with John Kasich as president.”

As Lester and I tromped through a neighborhood called Chateau Woods, we stopped to chat with Bob Wolford, an independent who had voted for Republicans in the past but had cast an early ballot for Ossoff the previous day. “We are practically in a one-party state,” Wolford explained to me when I asked why he had voted for the Democrat. With Republicans controlling Congress, the White House and a majority of state legislatures, Wolford explained, “I’m only going to vote for a Democrat because that’s the only way to get opposition in the government.”

Republicans' recent attacks against Ossoff also seem to have had a negative impact — on Republicans. Wolford said that he was turned off by the GOP’s attack ads about Ossoff. “I’ve seen one positive ad on the Republican side,” he said. “All the other ads say if you’re voting for Ossoff, you’re voting for ISIS.”

The running theme I encountered when talking to voters in Georgia’s 6th Congressional District was frustration — with Trump, partisan rigidity and negative politicking. Ossoff has positioned himself to capitalize on that frustration and the shifting demographics, but he’s still a Democrat running in a historically Republican district. The politics of Georgia’s sixth district are changing and Trump seems to be catalyzing that political shift. We’ll know soon whether the district has changed enough to elect its first Democratic representative in nearly four decades.