Soaring beyond 100: Early heat wave that bakes India is a sign of what’s to come

Heat waves have set in early in northern India. They are expected to become more common with warming 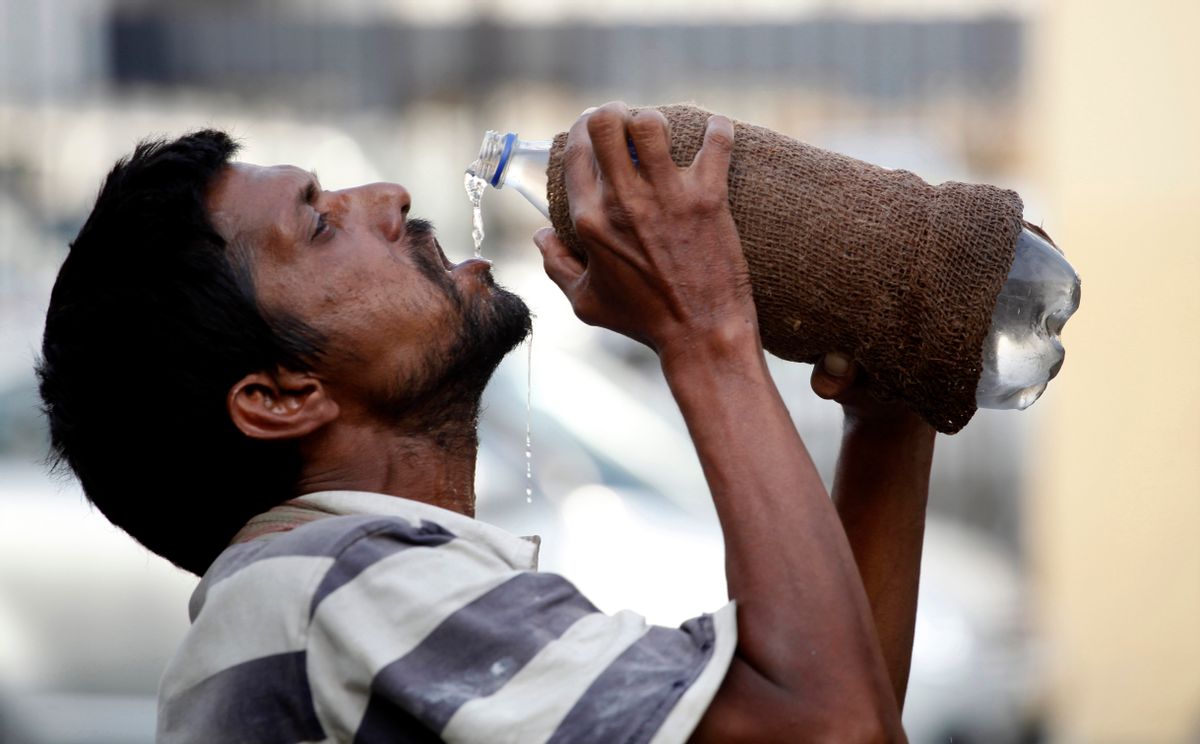 FILE - In this Sunday, May 31, 2015, file photo, an Indian drinks water from a bottle on a hot summer day in Allahabad, India. India is launching programs to protect people from extreme heat in two high-risk cities, after a devastating heat wave killed at least 2,500 people across the country last year. (AP/Rajesh Kumar Singh, file)
--

Temperatures across northern India, including the capital New Delhi, are set to soar well above 100°F (37.8°C) through the weekend and into next week thanks to a pre-monsoon heat wave that has set in somewhat earlier than normal.

Such heat waves are expected to become both more common and more intense as the world warms from the continued buildup of heat-trapping greenhouse gases, in India and elsewhere, posing a threat to public health. Studies have suggested that India will be a particular hotspot for populations stressed by the combination of extreme heat and humidity.

Heat waves in recent years and the high number of deaths associated with them have served as wake-up calls for several Indian cities, prompting them to institute “heat-action plans” to better warn their citizens of the potential impacts of extreme heat.

Heat waves typically set in across India during the period from April to June, before the cooling monsoon rains arrive. But the heat this year began a bit earlier than normal, with New Delhi recording it hottest March in seven years, Steven Bowen, director of impact forecasting at the reinsurance company Aon Benfield, said.

A few spots in the western state of Gujarat had their hottest temperatures ever recorded in April, all at or above 112°F (44.6°C) on April 13.

“Parts of India have seen anomalously warm conditions for the last couple of weeks, which is a bit earlier than normal,” Bowen said.

That heat waves will become more common and more intense is one of the clearest outcomes of human-driven global warming. As average temperatures rise, the heat waves that act on top of them become hotter and hotter and it becomes easier to reach those extreme temperatures.

Global temperatures have already risen by nearly 2°F (1°C) over the past century. Countries, including India, have agreed to curb the emissions of greenhouse gases that are heating the planet to limit temperature rise to no more than 2°C (3.6°F) by the end of the century.

Because of this temperature rise, the heat waves that today only happen about once every 20 years could become an annual threat, a 2016 study showed.

The early heat this year is due to a shift in wind patterns that has seen air flowing in from the south and west, across dry areas that quickly cause that air to warm, Bowen said. Dry soils from the unusually dry winter and spring across the country also provided a heat boost, as have warmer-than-normal ocean waters nearby.

How long the heat wave season will last depends on when the monsoon finally brings summer rains. This could depend on whether an El Niño — a natural climate cycle that impacts weather patterns worldwide — develops again this year, which U.S. forecasters have said has a 50 percent chance of happening. If an El Niño emerges early, it could delay the onset of the monsoon season as it did during the 2015-2016 El Niño and prolong the heat.

Temperatures over the next few days are expected to reach more than 104°F (40°C) over a wide swath of western and central India, according to forecasts from the India Meteorological Department.

Research has already detected the fingerprints of warming on heat waves occurring today, including previous ones in India, such as a major event in 2015 that killed an estimated 2,300 across the country.

While a study conducted by researchers working with Climate Central’s World Weather Attribution program didn’t find a clear-cut signal of climate change, a study detailed in a special annual issue of the journal Bulletin of the American Meteorological Society found that the heat indices recorded during that event (as well as a separate one in Pakistan) were about 800 times more likely with climate change. The heat index is a measure that combines the effects of heat and humidity.

When temperatures and humidity are both high, the body’s natural cooling system — the evaporation of sweat — is suppressed. The very young, very old and the infirm are the most susceptible to heat stress.

That 1-2 punch of heat and humidity will likely put millions at increased risk of health impacts during heat waves in the future, other research has shown. A 2015 study found that areas of the world where population is expected to rise the most, including India, will also see some of the biggest increases in extreme heat stress events, which combine heat and humidity.

Heat stress is particularly a concern in India, where many people work outdoors, in farming or on construction sites, and there can be a lack of cooling centers and ready access to clean water.

Recent heat waves have acted to raise awareness of the issue across India. After 1,300 died during a 2010 heat wave in the city of Ahmedabad in Gujarat state, the city worked with the Natural Resources Defense Council to set up a heat-action plan. The plan, which launched in 2013, worked to raise awareness of the dangers of heat stress with the city’s residents with messages on billboards and even on Facebook and WhatsApp.

Officials credit that plan for reducing the number of deaths the city saw during the 2015 heat wave: In a city of 7 million people, only 20 heat-related deaths were recorded during the event.

“The Ahmedabad Heat Action Plan is a necessary step toward protecting our communities from extreme heat and a valuable model for future climate adaptation efforts in other communities,” Ahmedabad Mayor Gautam Shah said in a statement from the NRDC.

This year, the plan was expanded to include adding cool roofs — by whitewashing, or adding tarps or white ceramic tiles to reduce indoor temperatures — and LED displays around the city that burn orange and red to correspond to heat warnings.

Several other cities in India have followed suit, including Nagpur and surrounding cities in Maharashtra state and Bhubaneswar in Odisha state, and others have plans in the works.