This is my flesh: Holy communion as an act of human connection, from sex to childbirth to death

Jesus told his disciples, "take my body." I have a deeper understanding of that command now 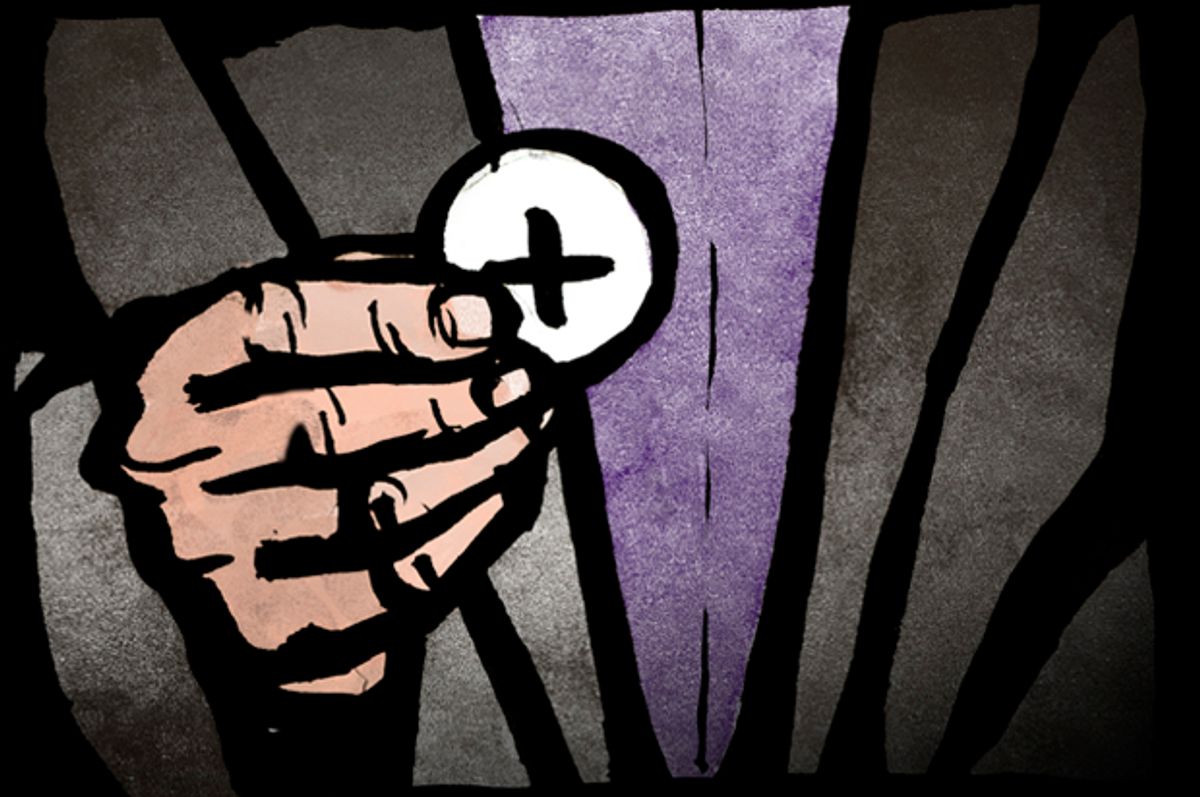 The first man I ever loved was Jesus. In retrospect, I can see how that might have set a unique tone for my other relationships. But lately, I can see how it will define the last one I will ever have, with the last person who will ever touch me.

As a child, I embraced wholeheartedly the mysteries of my Catholicism, even as I labored gamely to comprehend them. But the part I loved, the part I locked on to, was Communion. The word alone captivated me, captivates me still. I couldn't wait to dress up like a little bride and experience the sacrament for the first time, to be so close to Jesus I could taste him.

Transubstantiation — the Catholic tenet that when Jesus told his friends at the last supper, "This is my body; this is my blood," he meant it literally — is a tough concept even for those us who were raised in the faith. The part where Catholics are supposed to believe that the mass isn't a remembrance of that act but a reliving of it, that bread and wine become body and blood — even tougher. It's what my Protestant spouse now sometimes refers to as my religion's "creepy cannibalism."

When I was young, I wondered why Catholics wear crosses on our necks — after all, the Crucifixion is recalled just once a year, but it's the Last Supper that forms the defining narrative of every mass, every day. It seemed to me that a story of a man alone in a moment of suffering was important, but more significant was the one in which human connection brings about transformation — one in which flesh and blood is a gift of love, and a gift to be shared.

As I grew older and became more interested in men who aren't the resurrected savior, I started to understand the inherent eroticism of that eucharistic sacrifice. In my adult years, I have learned that while sex is not always an act of love, good sex is its own form of alchemy, as close to a miraculous event as I will likely ever get.

In my early thirties, I learned to give of my body in a new way. As my firstborn stirred within me, the central act of my religion took on yet another dimension. That command to "take my body" now seemed not just spiritual, not just sexual. It was maternal. Carrying my daughter was a new kind of communion, a different magic. I was participating in the inherently collaborative act of bringing life into the world, the transformation not of water and wine but man and woman. And in the blood and sweat and tears of childbirth, my baby and I were fiercely tethering ourselves to the sacred and profound as links in the chain of life, fastened to each other, fastened to the eternal.

I have always loved the iconography of Christianity — not those tender Madonnas with their serious-looking babies, though. I love crowns of thorns and palms and feet that are washed in dark purple-red blood. I love all things visceral and sticky. I love that Jesus didn't, at that crucial last meal with his squad, say "Take my ideas." He said "Take my body." I've spent my whole life trying to figure why that was so important. And what I've come up with is that I am closest to the divine when I am closest to others. When I give my body. In a touch. In a teardrop.

A few years ago I got cancer, the really bad kind. I didn't know if I would survive even a few months, and I didn't know what kind of mess my mortality would create for the people I love the most. I was fortunate to get better. But I'm still going to die sometime. What's left will still need to be dealt with. And while I don't know what if anything awaits me on the other side of life, I know now where I fit into the infinite. I learned it, more recently, on a visit to my doctor's lab.

It was a chilly morning outside, the kind where you can see your breath when you exhale. I'd come in to talk about the drug treatment that saved my life. But when I met with my doctor, he was more eager to tell me about another patient of his, one who had just died of the same disease. The man lived in a nearby suburb, and as he lay in the hospice detaching from this world, he told his son to make a phone call. Dwindling down to the few things he could yet do in his life, he saw something he could do in his death. "Every now and then you get a patient who's very special," my doctor said. "He gave us his body for research." One last gesture of love. A chance to do something for those yet to receive that shattering phone call that upends everything. A link in the chain of life, the chain of communion. That's what I want now, too.

Ever since that day in at the lab, I have seen things differently. I see the empty places in my body where cancer decimated and surgery and drugs cleared the land. And I see a gift, waiting to be given, a change, waiting to happen. I hear inside my head the words I've heard every time I've ever gone to church, and understand I was never meant to just listen to them. I was meant to practice them. And eventually to say in the end, this is my flesh. This is my blood. Take them.