"We can’t just be going through all of this for nothing": The final season of "The Leftovers" finds its power in the confusion of loss 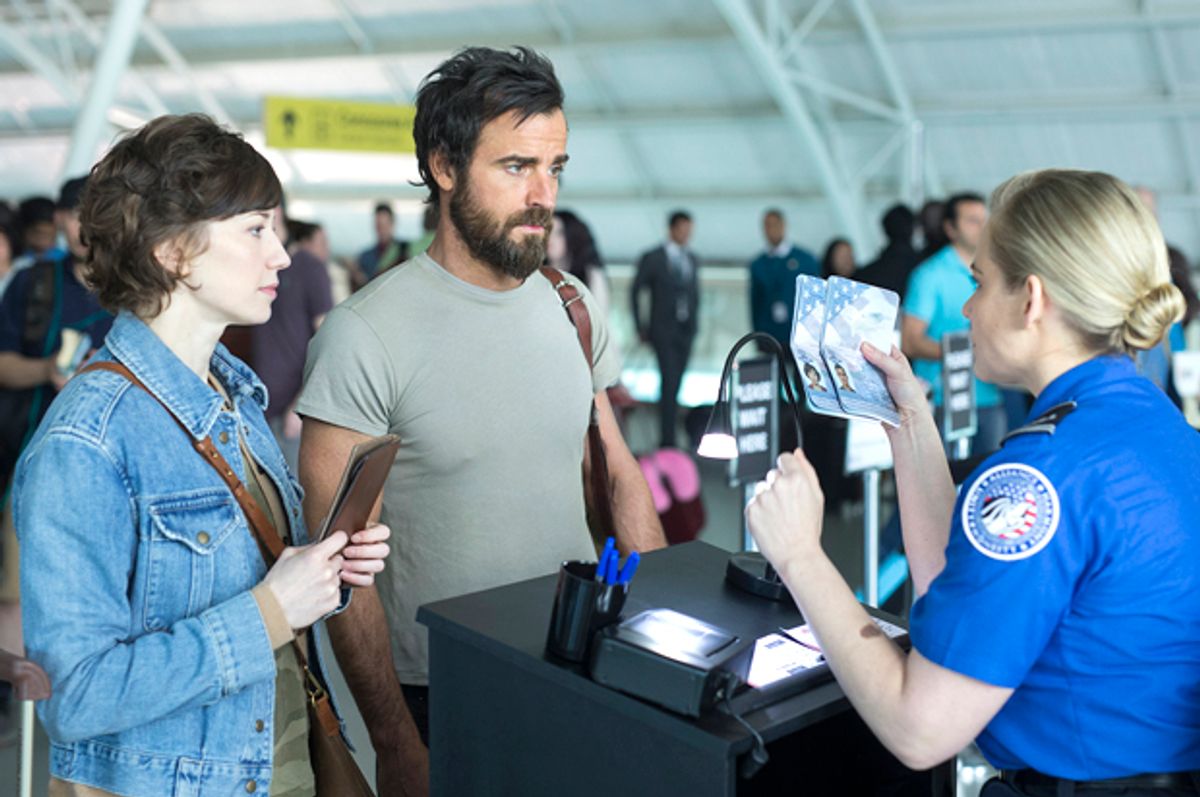 Nobody warned me about the dreams. They are varied, and I never know what form they’ll take.

In one repeat offender I’m back in my mother’s hospital room, sitting by her bedside. Tubes and leads snake out of her, but she’s happy, smiling, conversing with me. I step out of the room to get a drink of water, to answer a phone call; I can’t remember why I do that, and it doesn’t matter. When I return, the room is empty — that’s the important part. Nurse, bed, I.V. bags and the irritating, beeping monitors, they’re all just gone, along with my mother. That’s when I wake up wet-faced and blubbering.

Other dreams that aren’t centrally about her still have a sting to them because. . . I wake up. Not that I don’t want to; it’s the process that sucks. My eyes open, the sensation of floating in warmth solidifies slightly. Competing sensations of perspiration gluing clammy cotton to my back and my foot testing the cold air outside my blankets begin to register. Consciousness folds back in on me, sheet by sheet — the hard edge of the nightstand, the minty side of the pillow, my husband’s snores invading my ears, all reminders that I’m actually here, in the world.

Then comes the solid veneer sealing everything in, the unbreakable finish: I’m here, and someone else is not and never will be again.

My apologies, reader, if you came here expecting a straight review of the third season of HBO’s “The Leftovers,” returning Sunday at 9 p.m. Perhaps it helps to know that if the final season of the drama weren’t worth a damn, I’d be playing it straight and cooking up comical turns of phrase to gently eviscerate it. But I get what it’s like to cup your hands in expectation of refreshing, clear confirmation of your expectations and have a scoop of a stranger’s guts slop into your palms instead. You may be surprised at this bait-and-switch. Annoyance is equally as likely.

But I don’t know where else to put this mess of feelings “The Leftovers” mirrors. We bring television into our homes and intimate spaces, integrating our favorite shows into our lives. We admire books and movies, but we live with the most meaningful series — especially those that prove to be terribly and coincidentally personal.

The morning after Sunday’s premiere my mother will be two weeks gone. I state this not to elicit sympathy but to grant context. One week after staring at a machine as its screen slowly counted her heartbeat down from 52 to 43 to twentysomething, hitting zero at last, I curled up in sweaty bedsheets nearly 2,000 miles away from that intensive care unit where she spent a month making her last stand, and absorbed seven of the third season’s eight episodes.

I binged these hours partially out of professional duty, and partially to see if I could find healing in watching Kevin Garvey (Justin Theroux), Nora Durst (Carrie Coon) and Kevin’s ex-wife Laurie (Amy Brenneman) contend with the inciting incident at the series’ heart, the “Sudden Departure," in which two percent of the world’s population suddenly vanished.

Turns out that watching a show about a world that sustains massive and simultaneous loss and asks many of the same questions spinning through my brain on a daily basis didn’t make me feel better. Unlike one recently released Netflix drama, at least it didn’t make me feel worse.

But I can confirm that all the hype leading up to the final approach of “The Leftovers” has merit. The seven episodes HBO provided are consistently brilliant, sure and mindful about tying up loose ends. HBO held the series finale back from critics, leaving us to discover how the story (and the world?) ends at the same time as the rest of you.

Such an assurance may not be enough to allay your doubts, given how “Leftovers” series creator Damon Lindelof  divided us with “Lost.” That finale wrapped in a way that, to put it kindly, gunned for emotional satisfaction as opposed to achieving a measure of concrete resolution. Popular opinion — or the loudest one anyway — holds that the closer did neither definitively well.

In contrast, these swan-song hours of “The Leftovers” immediately look and feel more confidently executed. They’re so cohesive, in fact, that they can be viewed on their own with minimal explanation if you choose to go that route. You shouldn’t, because that would rob you of enjoying the enthralling second season, which at once built upon the uneven first season and put it aside to take the story in a fresh direction.

The fact that I’m praising this show at all is significant too: I was among the many who abandoned the despair-sodden Season 1 early on. At the times I felt like it indulgently flagellated the audience with woe, and that's a hell of a way to end a weekend.

One day I will reconsider that freshman season with the eyes of someone who resides in a new world and in a body that’s missing a few parts. Because now I think I can fully understand what Lindelof and his co-creator Tom Perrotta were seeking to accomplish. Perhaps I'll even laugh at the randomness of it all, the very idea that October 14, 2011, of all days, marks the moment that millions of people ranging in notoriety from unbaptized babies to Gary Busey simply blinked out of existence.

The second season uprooted the Garveys, from Mapleton, New York, to start anew in Jarden, Texas, renamed Miracle due to its shocking lack of departures. There they meet another family, the Murphys (Regina King, Kevin Carroll, Jovan Adepo and Jasmin Savoy Brown).

And it is in Miracle where “The Leftovers” takes root and flourishes into something greater than an agnostic show about what may or may not be the Rapture. In a very real way the plot became crazier, stocking Miracle with mysteries, cosmic peculiarities and adventures, causing Kevin to unlock cases in his life and the town. One strange turn of events leads him to descend into a Purgatory of sorts. Belief, or the rejection of it, is also central to the plot.

“The Leftovers” also crystallized its focus in Season 2, transforming a once severe drama into a bizarre, often hysterical and occasionally alarming depiction of how human beings grasp at the quiet veil of magical thinking, unreasonable hope and pale insanity that accompany irreversible loss. Faith, specifically how faith is at once unreasonable and a crucial guide through life’s cutting shards, trusses the story together and plays out in concrete, disparate ways. The travails of former reverend Matt Jamison (Christopher Eccleston) speak to one concept of faith; the disquieting presence of the white-clad, chain-smoking nihilists known as the Guilty Remnant make a different case.

In the second season Kevin woke up in places and couldn’t explain how he got to them. He spent one episode as an international assassin and, in another, had to sing karaoke to return to our plane of existence. Season 2 tingled with anxiety and misdirects and began with a cave woman. Season 3 is no less unpredictable or surreal, and is best enjoyed by knowing as little as possible about it.

There’s a lion, I’ll say that, and a fantastic voyage. Much of the season takes place in Australia and involves an odyssey of sorts driven by a ridiculous aim. All of it invites us to consider the nature of faith and existence — again, heavy stuff for a Sunday night, but thoroughly enjoyable and affirming when it’s done well. Maybe the Sudden Departure marked the start of something, or the beginning of the end. It might be one of those universal mysteries meant to underscore how little power those of us still bound to Earth actually wield.

Perhaps, though, the Sudden Departure and “The Leftovers” reminds us that chasms open up in our lives and transform them in a flash, that one day each of us wakes up to feel a three-chambered heart beating away in our chest and figure out how to get out of bed and put one foot in front of the other nevertheless.

Everybody loses. Everyone will cross that threshold of understanding at some point, and not all who love “The Leftovers” have to have experienced that truth as a prerequisite to appreciating the show. But in a weird way, being intimate with that sensation facilitates a more profound connection to the show. “We can’t just be going through all of this for nothing, man,” a character declares at one point. In a real way, for the first time in my life, I fully comprehend that thirst for meaning.

But maybe it’s possible to find consolation in those in-between spaces granted by sleep, and dream, where the ache left by the departed piece of my heart might somehow be temporarily forgotten. Maybe, too, “The Leftovers” will leave us with answers to the questions and puzzles it has been posing, and will fill in the gaps and spaces that beg to be closed. Real life imparts little in the way of such soothing conclusion upon the bereft.