Fearless Girl must go: It's a tourist attraction and an appealing fantasy — but a terrible symbol for feminism

Fearless Girl may look cool, but it's a toothless work that does nothing to confront the realities of sexism 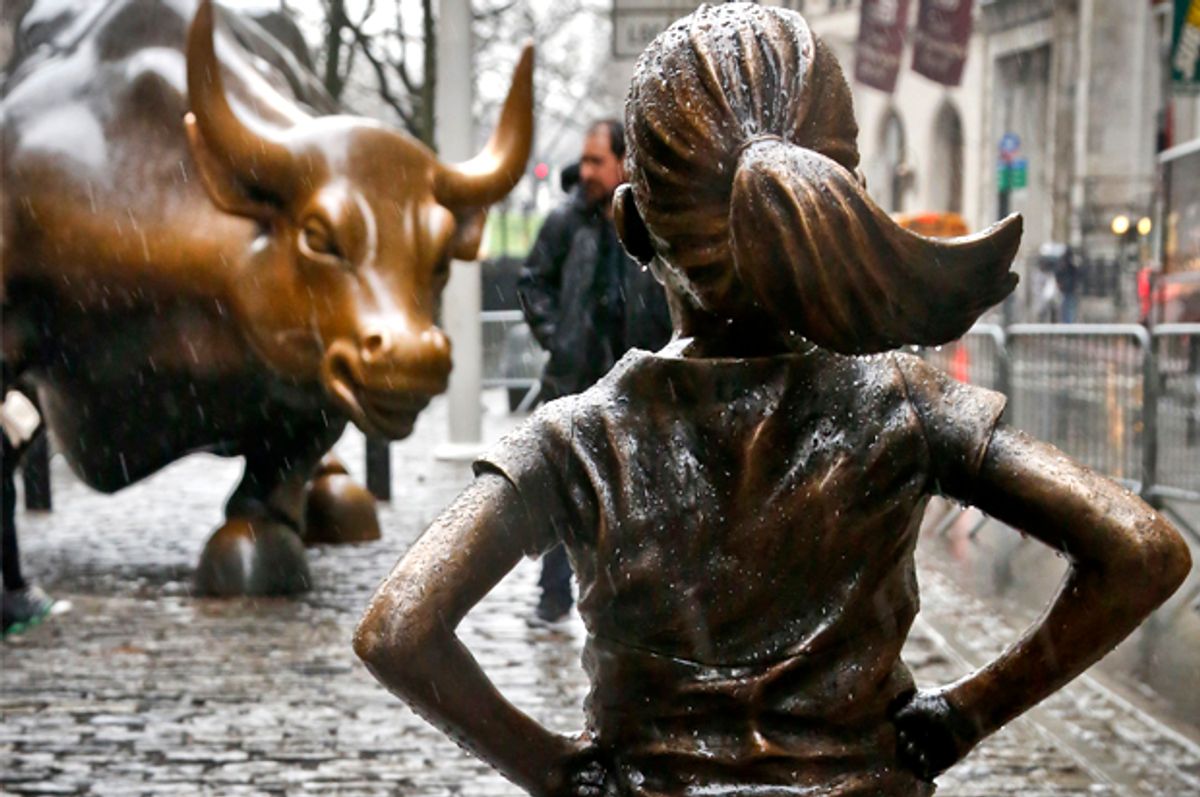 The Fearless Girl statue, a sculpture of a little girl staring down the famous Charging Bull in the financial district of lower Manhattan, has now sparked a political and cultural controversy. After New York's Mayor Bill de Blasio offered a yearlong extension on the permit for the statue, which was supposed to be a temporary installation, the artist of the Charging Bull statue, Arturo Di Modica, demanded that the city take down Fearless Girl, saying it infringed on the artistic vision of his original work.

It may be surprising to hear this, but a lot of feminists are in firm agreement that it's time for Fearless Girl to go. And I am one of them.

Most of the complaints center around the corporate-centric nature of Fearless Girl, which was commissioned by State Street Global Advisors as a generic promotion of the idea of women in leadership.

"Feminists would be hard-pressed to find a better symbol of the movement’s widening class divides than Fearless Girl," wrote Christina Cauterucci of Slate. "As Jia Tolentino ably lays out in the New Yorker, contemporary feminism’s fixation on the incremental admission of a small number of women into traditional halls of power ignores both the vast majority of women and the ways other forms of oppression disproportionately harm women."

It's hard to disagree with that, though it's also worth pointing out that the disdain for efforts to put more women in leadership roles also happens to be the most boyfriend-friendly kind of feminism. What I mean by that is it's a feminism that advocates for women to have abortion access and education but one that is a lot less interested in topics that may threaten liberal men, such as the idea that women should be able to compete with them for well-paying jobs.

I personally prefer a both/and approach. We can fight income inequality while also taking a sledgehammer to the hostility toward female ambition that helped lead to the defeat of Hillary Clinton and Donald-WTF-Trump's becoming president.

My objection to Fearless Girl is that it doesn't even succeed at meeting its admittedly limited artistic goal of advocating for female ambition. The piece is infantilizing and places the blame for women's inequality on women themselves, not on the structural forces of sexism.

Being human, I'm not immune to the appeal this statue has for tourists, especially when it comes to the crowds of little girls crowding around the statue, having their pictures taken. But even the fact that this statue is so popular should be the first clue about how toothless it is. Girl power is widely popular, not just on the left but increasingly on the right. Almost everyone loves the idea of little girls being proud and strong and getting good grades and being good at sports.

But the second those A-student girls grow up into women who want good jobs and egalitarian marriages and maybe even a shot at the presidency, suddenly people stop being so enthusiastic.

"[E]veryone knows that men tend to be OK with 'girl power' so long as it’s their daughter benefiting but seem increasingly less comfortable with it when women in general benefit," wrote the blogger vacuumslayer.

This observation is backed up by cold, hard research. As Jill Filipovic wrote in The New York Times last summer:

And like Mr. Trump praising his daughter’s business acumen, men want different things in their wives than in their daughters. Changing gender roles look less threatening when it’s their children who benefit. According to a survey published by Maria Shriver’s Shriver Report, American men listed “intelligence” as the top quality they valued in both a wife and a daughter, but then the responses split: More men said they wanted their wives to be attractive and sweet than said the same about their female children. For daughters, men ranked being independent, strong and principled as more important qualities than those same characteristics in wives. Two-thirds of men want an independent daughter, but only one in three wants an independent wife. Fourteen percent of men said they wanted a wife who was a homemaker; just 5 percent said the same about their daughters.

Fearless Girl couldn't be better designed, in other words, to reassure male viewers that their own unfair advantages are not being threatened — though some men resent the statue anyway.

This all points to the deeper problem with treating "girl power" as a suitable stand-in for actual feminism. Regardless of the intentions behind its creation, the statue suggests that the main thing standing between women and equality is not oppression, but their own inferiority — that if they stopped being so fearful and started being more fearless, then that nasty old sexism would just wither away.

Which isn't to say that parents are wrong to want to raise their girls to be strong and hardworking. But the problem isn't and has never been that girls — or women — lack strength or a work ethic. Women have always had these qualities, in abundance. Statistics show us that women work harder than men, to the tune of 39 more days a year. Even when it comes to political activism, women do most of the work while receiving less of the credit. And the fact that women even bother to date men after looking at the grim statistics about sexual abuse and domestic violence should quell any suspicion that the gender is, on the whole, anything but fearless.

If strength and fearlessness were all it took to defeat sexism, then we would have licked that problem long ago. No, the reason for women's lack of equality is that there's an ingrained and well-organized system to clip the wings of women and keep them in their place. The only way to fight back is through organizing and collective resistance. The image of solitary defiance in Fearless Girl is fun to look at but completely misrepresents what is required to defeat the millennia's worth of male oppression that's keeping women down.