Medicaid expansion: It's a widely popular issue Democrats and progressives can win on — right now

Trump and the GOP couldn't kill Obamacare, and now Democrats have a chance to push Medicaid expansion — and win 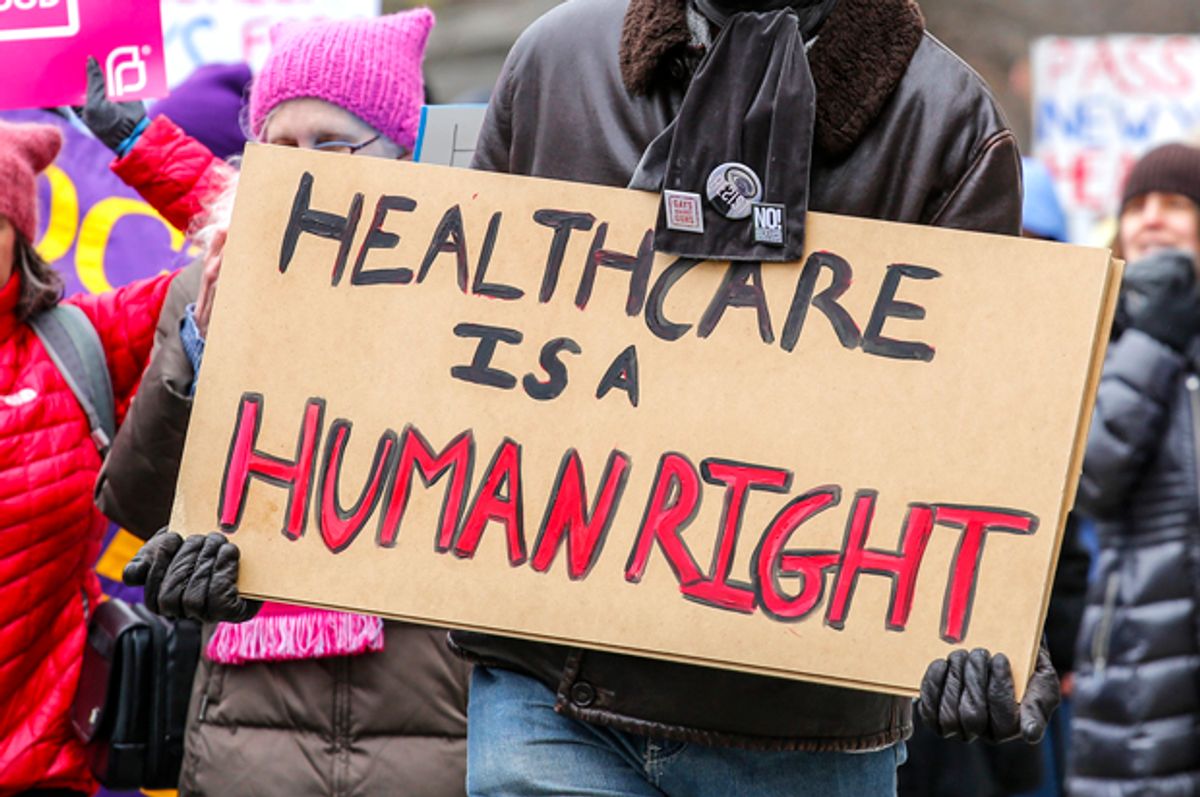 Over the long term, progressives must define a vision for truly universal, government-guaranteed health care. A key step in the process is ensuring that all states accept the Medicaid expansion, which would give millions of Americans health insurance. In the 2018 gubernatorial elections, numerous Republican governors across the country who have squashed the Medicaid expansion are being termed out, and a progressive challenger could turn Medicaid expansion into a winning issue.

Progressives should also recruit state legislative candidates dedicated to health care access, to challenge state legislators (like Republicans in Virginia, up for re-election in 2017) who have blocked the Medicaid expansion. Survey data suggests that Medicaid expansion is broadly popular even in deep red states, and could be a wedge issue separating Republican voters from their donor class. New research suggests it could even bring new voters into the electorate.

The Medicaid Expansion Is Popular

Though much of the media coverage about the failure of the GOP's American Health Care Act has focused on resistance by the House Freedom Caucus, the activist fervor unleashed over cuts to Medicaid and other popular benefits were also crucial. Medicaid expansion is an issue that pits the general public against the powerful Republican donor class, as the chart below shows. Medicaid expansion is also slightly more popular with voters than non-voters (39 percent of voters favor rejection, compared to 35 percent of non-voters, a statistically significant difference). A recent study in Alabama found that of the more than 300,000 people who would benefit from the Medicaid expansion, only about a third were registered to vote. Of those who were unregistered, many felt disengaged from the political system and others were permanently disenfranchised due to a felony or lack of voter ID. I examined data from the 2014 Cooperative Congressional Election Studies (CCES) survey, which is a large sample survey, meaning that I can examine state-level support for the Medicaid expansion. Given that national public opinion has swung more favorably toward the Affordable Care Act, it may well be that this underestimates support for the Medicaid expansion. I examined states where a Republican governor who opposed expansion was term-limited out, and where there was a large enough sample to draw meaningful conclusions. In addition, I examined Virgina, where a deep red State Assembly is blocking expansion, but those members face strong challengers in 2017. As the chart shows, in all states a majority of individuals support the Medicaid expansion. In a previous piece, I explored evidence suggesting that the Medicaid expansion would bring jobs and economic growth to state economies. In addition, by reducing the uninsured rate, the Medicaid expansion would save lives, reduce health care costs and improve well-being. Research suggests that one core reason states rejected the Medicaid expansion was racism. Social scientists Colleen Grogan and Sunggeun Park find that “state adoption decisions are positively related to white opinion and do not respond to nonwhite support levels.” They find that large black populations in states led to lower chances of Medicaid adoption. CCES data shows that higher racial resentment predicts lower support for Medicaid expansion among whites, controlling for age, gender, income, ideology, education and insured status (see below). Political scientist Alex Hertel-Fernandez tells me, "Despite the importance of the Medicaid expansion for the rollout of the ACA, Democrats showed little appetite for making battles over state Medicaid choices into a campaign issue -- either in 2014 or 2016.” This was the case, even though Medicaid expansion is broadly popular. A poll in Tennessee found overwhelming opposition to the decision not to expand Medicaid (60 percent opposed rejecting the expansion and 33 percent supported rejecting it, while the rest were undecided). A poll in Kentucky, which did expand Medicaid, found the decision was extremely popular (a Kaiser Family Foundation poll found 63 percent in support, 25 percent opposed and 13 percent who didn’t know).

At the same time, state-level progressive organizations didn’t prioritize Medicaid expansion, even though political scientists Timothy Callaghan and Lawrence Jacobs find that where public interest groups pushed hard for Medicaid expansion, they were often successful. The result: After the Supreme Court decision that made Medicaid expansion optional, more than a dozen Republican governors refused to expand Medicaid. In the 2014 midterms, none of those governors was unseated by a Democratic challenger (in Alaska, Sean Parnell lost to a former Republican running as an independent). Later, Louisiana Gov. Bobby Jindal and North Carolina Gov. Pat McCrory were both unseated, though it’s debatable how much of a role Medicaid played in their defeats.

When individuals apply for Medicaid, they have an opportunity to register to vote (under the National Voter Registration Act). Unsurprisingly, Sances and Clinton find a 5 percent increase in registration in counties where the Medicaid expansion was implemented. In the short term, however, neither Haselwerdt nor Sances and Clinton find a big shift toward Democrats. One explanation is that voters may not have tied the Medicaid expansion to a particular party, or even have been aware that expansion was what led them to be eligible for Medicaid. In many red states, governors actively worked to avoid any association between Medicaid expansion and “Obamacare.” Another explanation could be that conservatives and people just above the expansion threshold may be upset about the expansion, sparking a backlash.

In a new paper, political scientists Amy E. Lerman and Katherine T. McCabe find that "personal experience with public health insurance programs leads to greater support for Medicare and the ACA.” This suggests that Medicaid expansion could help foster a politically mobilized coalition to defend the program in the future.

State-level elections in 2017 and 2018 will provide a big test for Democrats. Many of the Republicans who were swept into office in the 2010 midterm elections are term-limited. Across the country, deeply unpopular Republicans are leaving office (one in a scandal the led to criminal charges). In Kansas, disgust over the Republican governor’s right-wing experimentation with the state’s economy helped a dark-horse candidate come within striking distance of a former state treasurer. One reason for anger at Gov. Sam Brownback is that he vetoed a bill passed by his own Republican legislature in order to prevent the Medicaid expansion, leaving 150,000 Kansas residents without health insurance.

The failure to expand Medicaid in every state is, on one side, a story of the increasing brutality of right-wing ideology. Governors sacrificed the well-being of their constituents and the health of their economies while busting holes in their budgets in the hopes of making an Ayn Rand novel come alive. Yet despite the near-universal popularity of Medicaid expansion, neither progressive statewide networks nor the Democratic Party forced Republicans to pay a price. Centrist columnists who love balanced budgets and wonkish policies said nothing as Republicans tumbled their states off a cliff in one of the most pointlessly cruel policy decisions in American political history. The Medicaid expansion battles -- or, more accurately, the lack of battles -- is a microcosm of everything wrong with American politics.

Winning governors’ mansions and state legislatures will be important if Democrats want to make any progress on mass incarceration, gerrymandering, abortion access and voting. If Democrats can’t win at the state level, Republicans can use their power to further clamp down on voting rights and unions while gerrymandering districts to ensure repeat victories in the future. If Democrats can win, they can give millions health insurance and begin peeling back modern-day disenfranchisement. But they’ll have to fight.