Police reform as the new health care: Trump, Sessions try to turn back the clock on Obama-era progress

Most citizens support police reform, just as they support Obamacare. Trump and Sessions want to turn back the clock 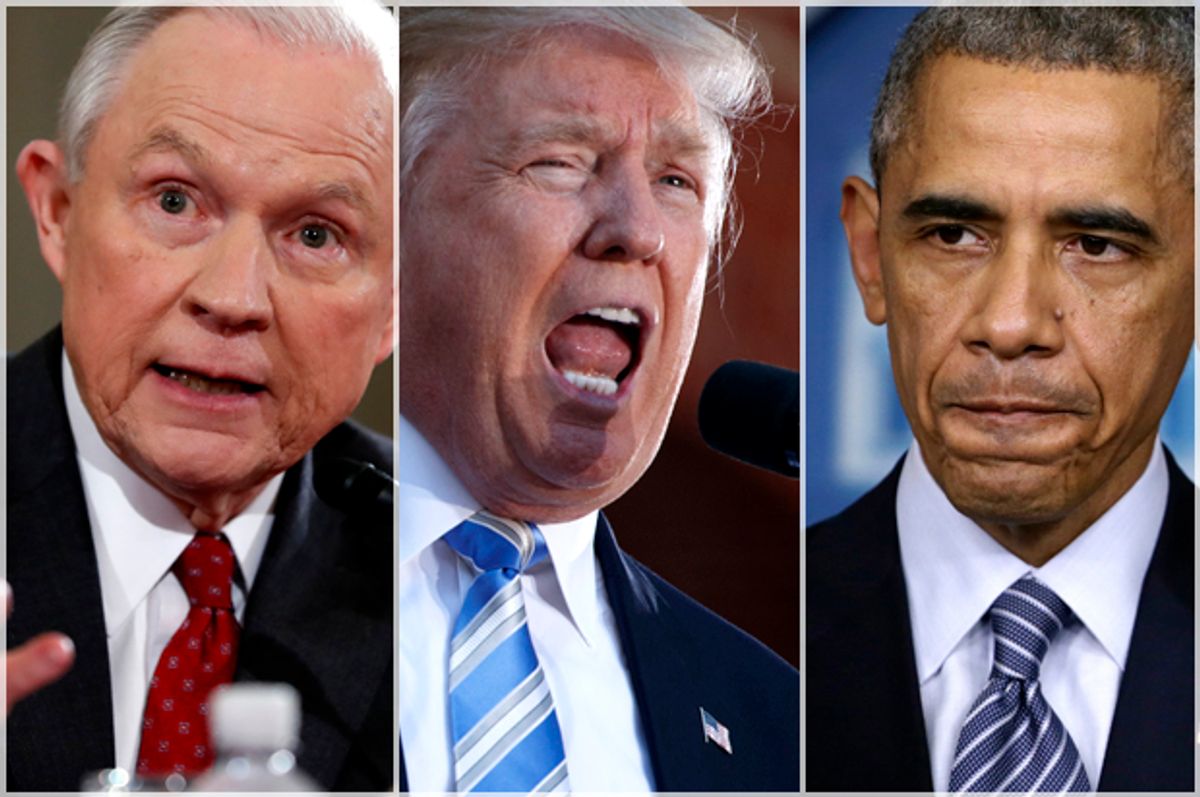 In a March 31 memo, Attorney General Jeff Sessions initiated a "sweeping review of police reform" initiated under President Barack Obama, or at least that's how USA Today reported it. That's clearly what Sessions was up to, as underscored by his follow-up attempt to block implementation of the Justice Department's consent decree with the Baltimore Police Department, an attempt that was opposed by the city's mayor and police commissioner, and which a federal court quickly shot down, much to Sessions' dismay.

But the actual text of Sessions' memo was far more muddled than that sounds. Its real motives were tucked into the folds and creases of the text, while its main thrust and broad outlines would actually support a continuation of Obama-era policies, according to activist and data analyst Samuel Sinyangwe.

A co-founder of Campaign Zero, Sinyangwe authored a study and co-authored a related report last September, as part of the Use of Force Project, finding that if departments implemented eight common-sense regulations on use of force, not only would they reduce the number of police-involved killings by 72 percent, they would make police officers safer too. What’s more, only one-third of America’s largest departments currently have at least four or more of the policies in place — meaning there’s a huge untapped potential for a proven win-win approach that saves lives of officers and the public as well.

A key passage in Sessions’ memo declared that "The [Justice] Department will use its resources to effectively promote a peaceful and lawful society, where the civil rights of all persons are valued and protected." It then went on to present a set of bullet points, presented as "principles that will advance those two goals," the very first of which was: "The safety and protection of the public is the paramount concern and duty of law enforcement officials."

“If Sessions were serious about protecting civil rights in America, he would continue what the Obama administration started," Sinyangwe told Salon, "with initiating more investigations of police departments, getting consent decrees that would mandate these types of changes to happen. I would encourage him to look at the evidence — instead of the rhetoric and the fear-mongering — that shows that when these things are implemented it does not have a deleterious effect on officer safety, which is what is put out as being his primary goal.”

There are, in effect, two contrasting worldviews in play, as Sinyangwe described. “From the police side of things, most of the conversation ... is that deadly encounters with civilians are the result of resisting [arrest] or threats to officers, and it's purely based on the actions of the subject, rather than the officers,” he said. In this view, "the officers are sort of reacting reasonably to the threats that they face.”

What's missing from that argument is any analysis of the role that policies and practices can play in determining the outcome of any encounter. That kind of analysis also differs from the activist focus “that these police interactions are guided purely by racism, and a dominance of the privileged classes over the low-income communities of color.” Unsurprisingly, Sinyangwe believes there's clearly something to that view. “We do find support for the fact that police are more likely to kill folks in communities that are minorities, so that theory hasn't been discounted," he said, "but we've added that the policies also matter in terms of those interactions.”

Sessions' biases were clearly on display in his response to the Baltimore consent decree. “I have grave concerns that some provisions of this decree will reduce the lawful powers of the police department and result in a less safe city,” the attorney general wrote, adding, “there are clear departures from many proven principles of good policing that we fear will result in more crime.”

But “proven principles” in common speech are a far cry from what a scientist would mean. It’s not enough that you’ve done something the same way for years, and seem to get good results — as in football before the invention of the forward pass, or basketball before the Harlem Globetrotters reimagined the game. It might seem common sense that restricting use of force in any way would make officers less safe, but it also seems to the naked eye that the earth is flat.  You could even have called it a “proven principle.” When you shift your frame of reference, however, “common sense” can change, too.

The main argument put forward by police unions trying to block use-of-force regulations is that they endanger officers. “Whenever this argument is put forward," Sinyangwe noted, "there's never any data to support it. The police unions have never presented any national data showing that the stated relationship actually exists. They just sort of taken it at face value. What we've done is actually tested that proposition and found that the departments that have the most restrictive policies on use of force are actually the safest for officers.” Increased officer safety was reflected in reductions of the number of officers assaulted and killed in the line of duty.

These findings point to a different sort of common sense, coming out of a different frame of reference. “Departments that have more reasonable and less confrontational interactions with the public because of these types of policies," Sinyangwe explained, "are going to be less likely to anger civilians and provoke civilians into attacking law enforcement.

“It's a two-way street. If you have a department that is operating consistent with community expectations and upholding the decency and dignity of civilians, it makes sense to think that in those areas civilians will respond in kind and be more trusting towards the police. So that's one explanation of what's happening.”

Two facts combined to create the perfect conditions for a “natural experiment” to see if use-of-force regulations could reduce officer-involved killings. Ironically or otherwise, the first scientific findings about improved officer safety came out of this effort as well. First of all, officer-involved killings vary widely from place to place. Rates of police killings per million people ranged from a low of zero (in seven jurisdictions) to a high of 25.2 in Orlando, Florida. Five other cities had more than 20 killings per million, and another 26 cities had rates in the double digits. Second was the fact that use-of-force regulations have been widely but not universally adopted. The average department employed three of the eight policies, but none employed all eight. The number employing any single given policy ranged from 15 to 77.

Three regulations produced dramatic life-saving results. “The three were banning choke holds and strangleholds; requiring officers to exhaust all other reasonable means before using deadly force; and requiring comprehensive reporting — meaning that every time an officer uses force, or threatens to use force, that is being documented and followed up on by the agencies,” Sinyangwe said. “Those three policies really stood out as having the largest difference. When departments have these policies in place they’re about 25 percent less likely to kill folks.”

The complete list of regulations studied — and the associated reductions in police killings — are as follows:

In the report itself, each regulation is presented with the language from one of the departments that implements it. This underscores perhaps the most important point that can be made about these regulations: Although they have often been adopted as a result of outside pressure (including Justice Department consent decrees), they are now part of the lived experience of thousands of officers, at all levels, in jurisdictions all across the country. Adopting them now can and should be seen as a matter of learning new best practices from fellow officers in the law enforcement community — best practices that directly benefit them.

One point that critics have often raised is that imposing consent decrees from outside creates resistance within law enforcement agencies, and is hence counterproductive. “It may be that police department policies adopted voluntarily have a greater impact than those adopted as requirements under Department of Justice consent decrees,” Sinyangwe wrote in his study, adding that it “should be the subject of further research.”

“There is mixed evidence around the effectiveness of consent decrees,” he explained in our conversation. “Every consent decree is not the same.” The regulations in the study are more commonly found in recent Obama-era decrees, but not in earlier ones, he explained. “So it's hard to evaluate them, because there are not that many consent decrees that have happened, and each one is different.

That being said, he went on, the argument about whether the culture of a police department matters more than its policies is something of a dead end: "Obviously it's both," Sinyangwe observed. “But we don't say in education that standards don't matter, right? So we shouldn't expect in policing that standards don't matter either. Standards are important in every field, and they also need to be enforced with a culture that values and upholds those standards.”

With the Trump-Session DOJ pulling back from police reform — even if courts won’t let them roll things back entirely — citizen activism will be more important than ever. So I asked Sinyangwe what people could do to help move us in the direction of a more fact-based approach that would actually make both police and communities safer.

“I would encourage communities to first learn about policies of their police departments,” he said. People can go to UseOfForceProject.org and look up their police department’s policy in the project's database there, if they live in one of the cities covered. “Then they can reach out to us, and we can provide research and evidence to support advocacy campaigns to implement these types of changes,” he said. “We have successfully pushed for changes, for example in the Orlando Police Department to implement two of the eight recommendations. We've also been involved with Baton Rouge and other police departments. There is a lot of work happening, and I will encourage people to learn about their communities, reach out to their police chief and city leadership, city council members and mayors, and ask them when they are going to push for more comprehensive changes that can keep communities safe.”

Ironically, the Trump-Sessions effort to reverse the tide of consent decrees may actually end up increasing the level, coherence and effectiveness of bottom-up citizen activism. As more and more policies are implemented through this route, the everyday life-and-death changes we need will simply outflank the hollow posturing that seems to have the upper hand today. As has happened with health care in the last few years, reality on the ground around the issue of police reform has shifted dramatically, in ways that many people in Washington seem ill equipped to grasp.