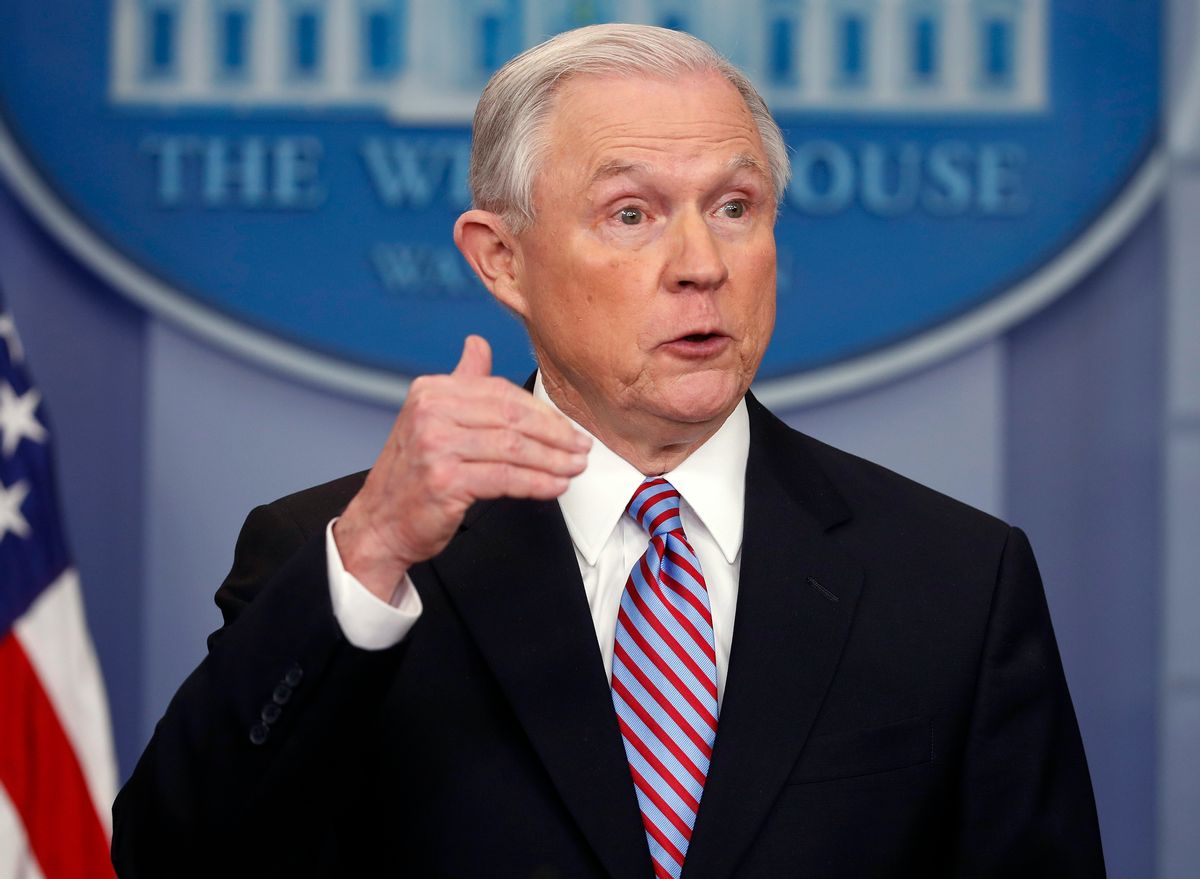 The federal government and bastions of opposition to President Donald Trump’s anti-immigrant police state are on a slow-motion collision course.

An 18-page memo by the Department of Homeland Security describes how the DHS and the Department of Justice are anticipating arresting, holding, processing and deporting large numbers of immigrants lacking visas. However, the memo also details how Trump’s coming crackdown is moving slowly, is poorly coordinated and barely funded—even as it has taken high-profile first steps like soliciting construction bids to build a border wall and is planning to showcase demonstration sections by late July.

On the other hand, in states like California, where one in three residents is foreign born and half the children have at least one immigrant parent, state and local governments are moving to thwart any massive new deportation effort. From the highest political circles in the legislature, to briefings by county agencies telling employees not to assist federal immigration police, to local cities declaring themselves sanctuaries, a colossal struggle is taking shape.

It will likely take months or longer before threshold questions—like what the feds can and can’t get away with—are resolved.

So far, it appears California officials are ahead of Trump, who issued his anti-immigration orders in late January. The California Senate just passed one bill telling local and state agencies not to cooperate with federal immigration enforcement, another to provide lawyers for immigrants facing deportation, and another barring public employees from disclosing a person's religion. Its legislative leaders have challenged Trump administration officials to stop making blank threats and specify what laws the state is violating.

“If the Trump administration resorts to attempting to enforce its order against California, the Legislature will use all available means to defend the rights, values and safety of California,” the letter to Attorney General Jeff Sessions and Secretary of Homeland Security John Kelly said, saying the administration has irresponsibly accused California of preventing Immigrations and Customs Enforcement from arresting people—but wouldn’t cite specifics. The California Supreme Court’s chief justice had written to both Sessions and Kelly, protesting that ICE was “stalking” courthouses to arrest for deportees.

“AG Sessions says that sanctuary policies make our cities and states LESS safe, but the facts show that the OPPOSITE is true,” Lt. Gov. Gavin Newsom wrote on Facebook. “In fact, on average, 35.5 fewer crimes are committed per 10,000 people in sanctuary counties, the median household annual income is $4,353 higher, the poverty rate is 2.3% lower, and unemployment is 1.1% lower. Before you take away our funds, I suggest you take a look at the facts, Mr. Attorney General.”

Across the state, more lines are being drawn. On Wednesday, the Center for Biological Diversity filed the first lawsuit to block a new border wall. Meanwhile, newspapers digging into police manuals have discovered that many departments have used the same text from a single publisher instructing cops to follow ICE's orders. The American Civil Liberties Union has demanded that the publisher  retract and revise that language, because it “encourages profiling and illegal detentions, and runs afoul of the Fourth Amendment.” Meanwhile, small cities are declaring themselves “sanctuaries” and activists are planning to shelter migrants in their homes.

While some red states are going in the opposite direction—like Indiana, which just passed a law barring its campuses from becoming sanctuaries—these pro-migrant stances are on a slow but sure collision course with the Trump administration.

That becomes clear when reviewing DHS’s 18-page memo describing the plan and progress to enlarge its deportation machinery. The memo, which DHS would not comment on except to say it was a draft—possibly to discount its slow start—still showed that the Trump administration was envisioning mass expulsions and a border wall, even as it repeatedly said that multi-millions, if not billions, were needed to fully implement Trump’s order. The Washington Post first obtained the memo.

The border wall progress report was typical. That will begin by building 34 miles of levees along the Rio Grande Valley in Texas, and 14 miles of wall outside San Diego, California, starting in mid-June. The San Diego section will be “demonstration” projects, each a quarter-mile long, to be finished by late July, when, after evaluation, finalists among the contractors will be chosen. The San Diego Union Tribune’s coverage makes these prototypes seem like a public relations ploy—a showy first step while Trump and Congress wrestle over future funding. DHS’s memo says this is the first step in building a more complex wall than now exists.

The effort to ramp up arrests and deportations is also eye-opening. There are different federal immigration police. All are seeking to expand, but also are saying why that is not happening fast. The memo says that the U.S. Customs and Border Protection (CBP) service already created two “temporary holding facilities” for 500 people each along the Texas border at Tornillo and Donna. But “as a result of recent downward trends in migration,” meaning fewer people crossing the Mexican border, they haven’t been used. It then looks ahead and says CBP envisions holding up to 12,500 people in six undisclosed sites.

Immigration and Customs Enforcement has “added 1,100 beds, although the additional beds have not been used,” the memo said. “ICE has identified 27 potential locations capable of providing 21,000 additional bed spaces.” But ICE said it could not use those facilities until “funding has been identified.” Immigration lawyers have said these locations are county jails or privately run prisons.

The memo says CPB is looking to hire 500 more border police at a cost of $100 million. That 500-guard figure is a tenth of what Trump’s executive order called for, which means it would cost $1 billion to hire the 5,000 new border police he wants. As of early February, the CPB had 19,602 agents, which was only 92 percent of the 21,370 positions it has, the memo said. To accelerate hiring, it suggested waiving a lie detector test, physical fitness requirement and Spanish proficiency, and embark on a “digital and social media presence” to lure recruits. As of March, DHS said it took an average of 300 days to hire a border guard, but hoped that could be cut to 160 days.

The DHS memo also said it was working on a plan to have “third country nationals” remain in Mexico awaiting a U.S. hearing on their status, which Mexico has flatly rejected. DHS said that could allow immigration judges to hear cases by video-conferencing, which would take about 90 days to set up, and would only cost $50,000 instead of $400,000 to create temporary courtrooms in mobile trailers.

While the DHS memo was filled with numerous administrative hurdles—like saying it would be very hard to build the wall in federal Wilderness Areas given legal restrictions—it did emphasize that it was moving ahead. It cited Sessions' directive to federal prosecutors to prioritize immigration enforcement and said DHS was seeking to sign legal agreements with state and local agencies “in addition to, rather than in place of, Federal performance of these duties.”

That last clause is telling. In the California legislators' letter to Sessions and Kelly—saying put up or shut up with accusations that the state was illegally blocking federal efforts—it cited constitutional precedents saying states cannot be commandeered into being arms of the federal police. The letter from 100 local lawmakers around the country made the same point, citing the 10th Amendment. That’s why DHS's memo says, “in addition to, rather than in place of,” suggesting they are not crossing that legal line.

You can expect that assertion will end up in court, along with other issues highlighted by DHS’s memo—such as how the federal law creating Wilderness Areas won’t allow construction of the wall, or the Center for Biological Diversity's lawsuit.

On Friday, a Trump administration lawyer told a federal District Court judge in San Francisco that the president's anti-sanctuary city executive order threatening the loss of federal funds was "narrow" and would not mean much for San Francisco—another apparent setback for his threats and policies. The city had sued, seeking a national restraining order on the threatened funding cuts.

"We have always been unafraid to lead and in the last few months we have announced repeatedly, emphatically, that we are unafraid to fight," Newsom told the California Legislature before the governor's 2017 state-of-the-state address. "Because what’s at stake isn’t just about our policies, it’s about our people."