Who knew? What if a Donald Trump Bachelor-style game could settle the rivalry between Kushner and Bannon for good? 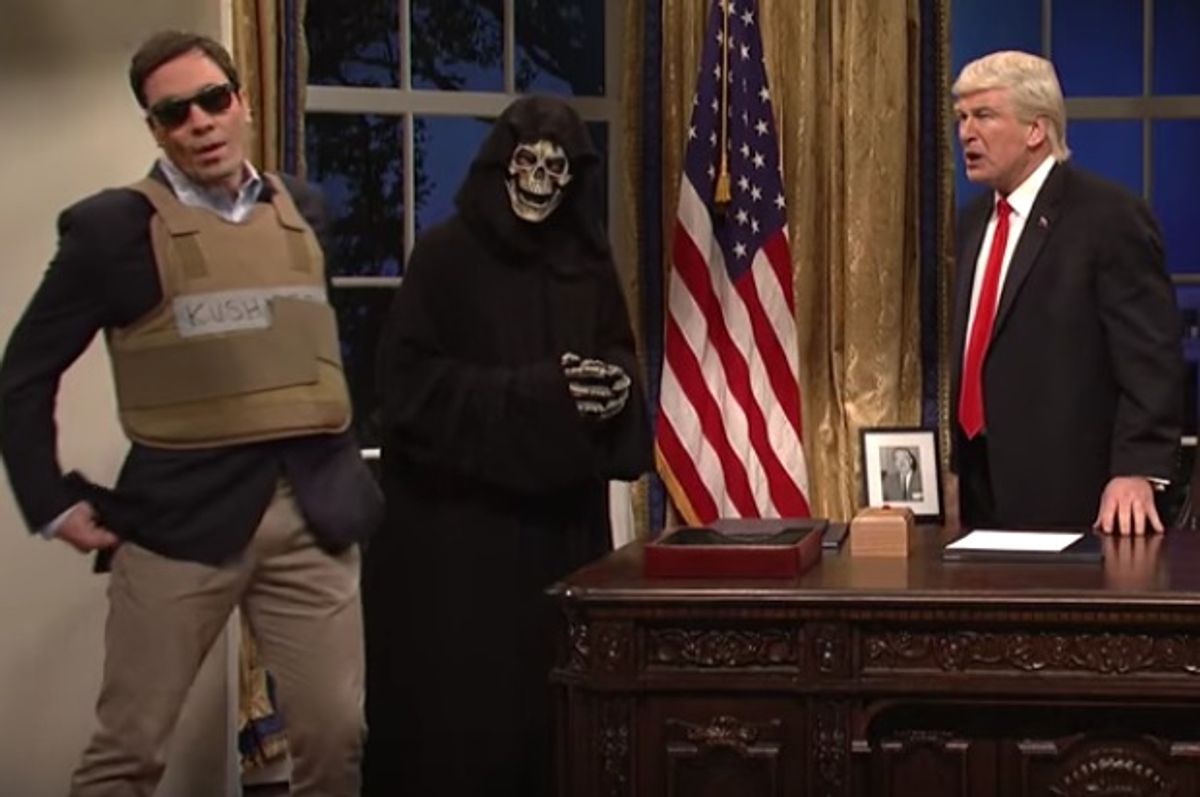 Saturday Night Live's cold open once again featured Alec Baldwin as President Donald Trump, and Beck Bennett as Vice President Mike Pence. Bennett's Pence tried to dissuade Trump from angering North Korea any further, as Trump extolled the virtues of his own first 100 days in office. Listing his first 100 days' accomplishments, Trump mused, “I dropped the Mother of All Bombs", and I take North Korea very seriously. I take Kim Jong-un very seriously…but he’s got a stupid little haircut" said Trump. "Why would a little man like that run a country?”

Trump then called in Steve Bannon, who as before appeared as the Grim Reaper, and prepared to vote either he or Jared Kushner off their top advisor duties, Bachelor style. “Stephen, you’ve never looked younger," quipped Trump to Grim Reaper Bannon. "Now send in my little Kushball, Jared Kushner!” he demanded. In walked Tonight Show Host Jimmy Fallon as Kushner, wearing a bullet proof vest over a navy blue blazer.  Trump compared Bannon and Kushner, who he says never speaks, but takes beautiful pictures. The winner of the two (one of whom was pictured in the photo Trump was holding) would stay on staff. Trump picked Kushner, and then, an even taller Grim Reaper came to take Bannon “back to hell”.

Baldwin's Trump offered Kushner his large, presidential desk, and sat down at a child-size desk near the floor — from which he yelled the customary "Live from New York, it's Saturday Night!"

Last night marked the first time in SNL history that the show was presented live coast to coast. “Tonight is bigger than a show, it’s a party!” said host Jimmy Fallon, who proceeded to do a song and dance routine to David Bowie’s Let’s Dance, accompanied by many singers and dancers.