WATCH: Bernie Sanders says "we must not act unilaterally" in Syria and North Korea 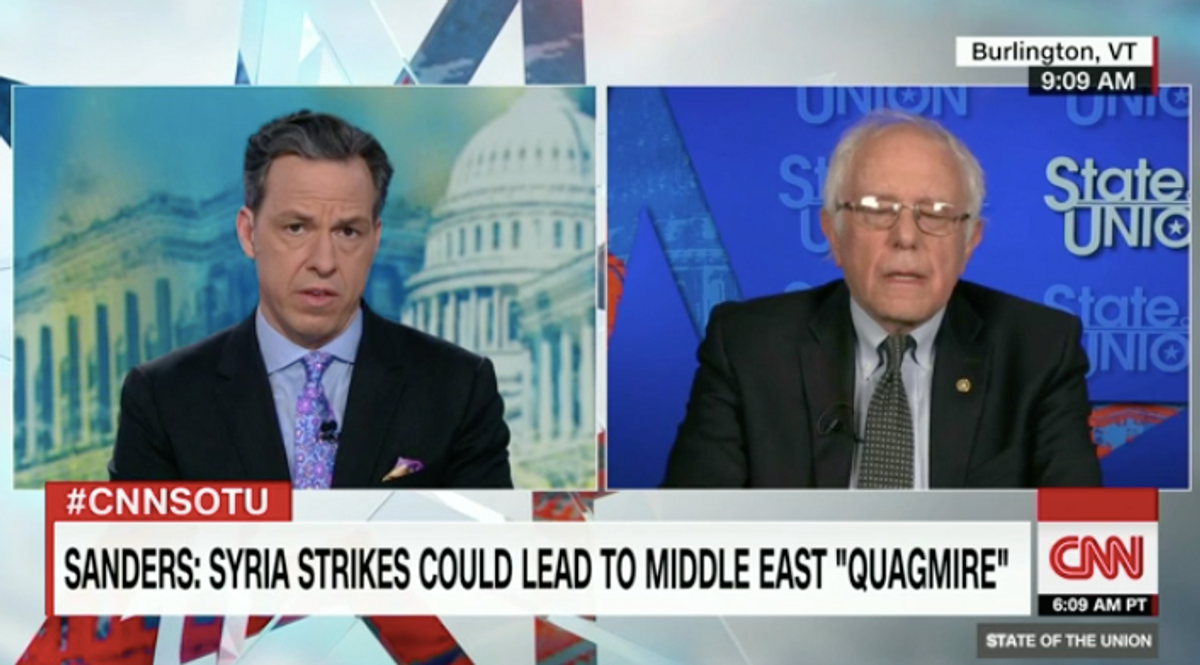 On Sunday, Bernie Sanders (I-VT), warned about the possible consequences of acting hastily and unilaterally amid the recent rise in tensions between the U.S. and North Korea.

"The key point here is that the United States must not act impulsively, and we must not act unilaterally," Sanders told CNN's Jake Tapper. The senator added that China's role in the region is imperative to achieving a positive outcome.

"What China has got to understand, is that they have got to put incredible pressure — work with the entire asian community — in telling North Korea that they have got to cease their efforts in developing intercontinental ballistic missiles and more nuclear weapons," Sanders said. "I think China has the capability of doing that."

The Vermont senator believes that partnership with China and other regional countries is what the U.S. must "focus on." President Trump's tweet on Sunday morning implies that he is looking to cooperate with China, despite having expressed contrasting views on the nation in the past.

Tapper noted that China even appears to be willing to restrict oil imports into North Korea, and asked Sanders if that was a result of Trump's policy of leaning on China.

"I think this policy shift on the part of China has been taking place for quite a while now," Sanders answered. He also noted that it was a good step for China to not send a representative to the military parade in North Korea, and  he praised their recent suspension of flights from Beijing to North Korea, but Sanders believes China must act further.

"But China has got to be doing a lot more, a lot more," Sanders explained. Adding that they must be willing to work with nations like Japan and South Korea to "make it very clear that these policies cannot continue" without the consequences of strong economic sanctions.

Tapper also brought up the fact that Sanders was one of the very only members of congress to oppose Trump's missile strike in Syria, and asked Sanders his he thought that the attack was just a "one-off."

Sanders once again stated the importance of not acting unilaterally, but firmly noted that the regime in Syria is responsible for massive destruction in the country.

"We have got to demand that Russia, and Iran stop their efforts in supporting this horrific dictator," Sanders told Tapper. However, he warned the importance of not being "dragged" into another lengthy conflict in the Middle East.

"I don't wanna see us dragged into another war in Syria when kids in this country can't afford to go to college, when our infrastructure is collapsing, when 28 million American's have no health insurance," he explained. "We have got to start paying attention to the needs back home."

Sanders pointed out that the war in Iraq was the worst "blunder" in modern history, stating that cooperation with the international community is vital to thwarting violence in the region.