Maxine Waters, Donald Trump and impeachment: One Democrat is ready — her party and the American people may follow

A California Democrat calls for impeachment, and the world says it's too early. That might change — and quickly 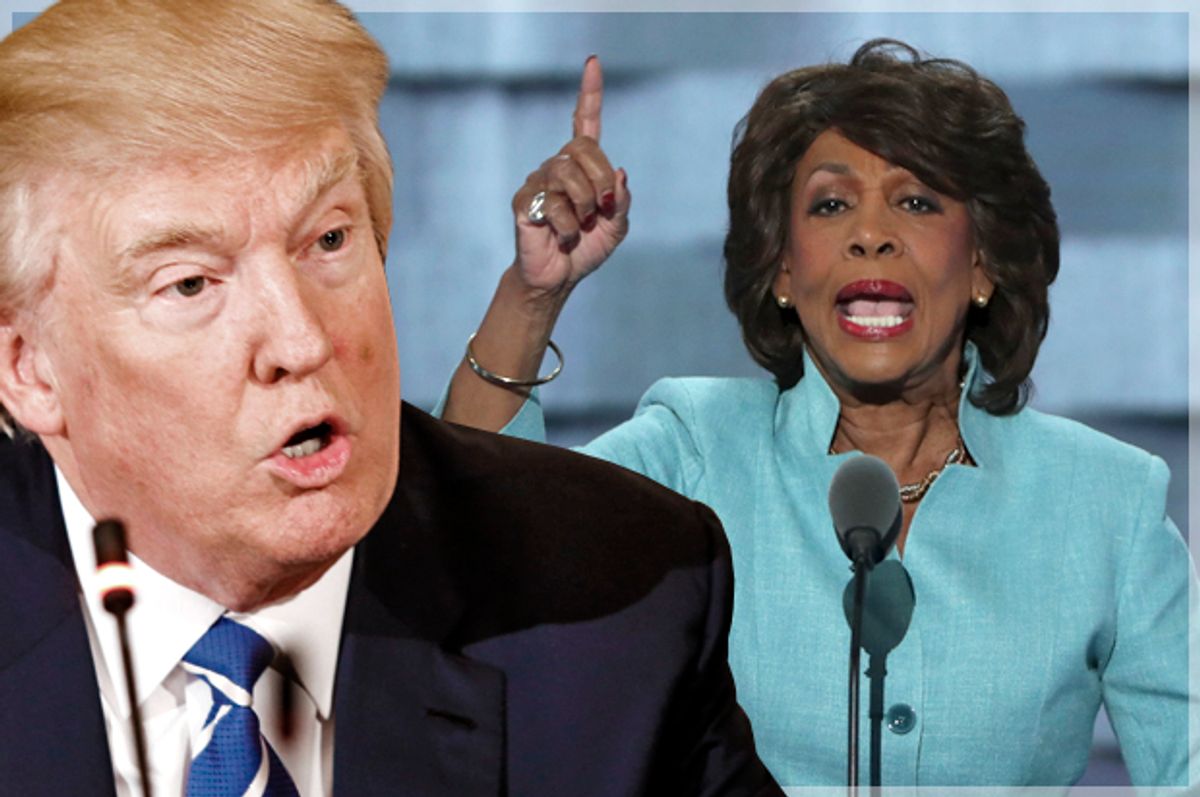 Over the weekend tens of thousands of Americans once more took to the streets to protest Donald Trump. In major cities and small towns across the country, citizens demanded that their president do what every president for the past 40 years has done: release his tax returns. Trump's response was to petulantly tweet that he did the impossible for a Republican by winning the Electoral College vote (the opposite is true; just ask George W. Bush) and suggesting that someone "look into" who paid the protesters because "the election is over."

Evidently he thought that winning the election meant everyone would march in lockstep singing "We love you, President Trump!" like they do in North Korea. He'd better get used to protests because they aren't going to stop. (The March for Science next weekend should really make him mad.)

The anti-Trump resistance is very much a grassroots effort, but there are leaders emerging. One of the most vocal is Rep. Maxine Waters, a Democrat who represents Los Angeles. Appearing at the Washington Tax Day march last Saturday, Waters put it bluntly: "I don't respect this president," she said. "I don't trust this president. He's not working in the best interests of the American people. I will fight every day until he is impeached!" Then she led the crowd in a chant of "Impeach 45!" It doesn't get any more resistant than that.

Waters has always been a tough and forceful politician, unafraid to take a position and speak her mind. She first came to national attention after the violence following the acquittal of police officers in the beating of Rodney King when she went on TV and explained to America through gritted teeth that the African-American community in L.A. hadn't just exploded out of nowhere. It was a message a lot of people didn't want to hear, but she made sure they received it anyway. She has been a thorn in the side of conservatives ever since then, once inspiring Ann Coulter to venomously spew that without affirmative action Waters "wouldn't have a job that didn't involve wearing a paper hat." Right-wingers often lose their composure when confronted with such a strong, unapologetic African-American woman who is unafraid of getting right up in their faces.

Waters has been appearing on TV again lately, and she has plenty to say about all the various Trump scandals. Her message is very simple: Trump must be impeached. Obviously Republicans are outraged (as usual), insisting that such talk is downright seditious. Very few Democrats are ready to join her at this point either. House Minority Leader Nancy Pelosi believes such talk is premature at best; she has said that Trump is "incoherent," "incompetent" and "reckless," but has insisted those aren't grounds for impeachment. According to Clare Malone at FiveThirtyEight, Waters understands that Pelosi has an obligation to stay above the fray but has said, “I don’t have the same responsibility.” She sees herself in a completely different role.

It may seem that Waters just has a pugilistic personality and is out front because it's her political style to mix it up. But there is a strategy at work in this. After all, it wasn't that long ago that a president was impeached for only the second time in history and this was over a "crime" that seems laughably insubstantial compared to the possibilities that Donald Trump could face. Just for starters, Trump's presidential campaign is being investigated in a counterintelligence probe, and the list of his conflicts of interest are so wide-ranging and so deep that almost anything could implicate him in a corruption scandal. Impeachment is really not a far-fetched proposition.

Back in the 1990s, President Bill Clinton's administration was under siege from almost the moment he took office. There was one small-bore, semi-fictitious scandal after another, from Filegate to Travelgate and Haircutgate to Vince Foster's suicide and, of course, the ancient Arkansas land deal known as Whitewater, from years before Clinton ran for president. The media lapped them up, reporting each new development with breathless excitement, piling them on top of one another until it seemed as though there wasn't anything else happening in the world.

Some of the motivation for all this was simple partisan payback. Republican Richard Nixon was a crook who had been run out of Washington and the GOP-ers were yearning to return the favor. Their defeat of the Democrat Jimmy Carter in 1980 was nice but it wasn't enough. Republicans wanted to rub the Democrats' smug, self-righteous faces in the dirt and what the political establishment considered to be the Southern Gothic fever swamp that accompanied Clinton to Washington offered an excellent opportunity. But in spite of the Republicans' deep desire to get Clinton, their primary game plan was merely to force his resignation (as had happened with Nixon). There was very little discussion of impeachment through all those years of endless scandalmongering.

Only one man, Rep. Bob Barr, R-Ga., kept bringing it up despite strong pushback from then House Speaker Newt Gingrich and every other member of the GOP leadership. House Majority Leader Dick Armey, R-Texas, said at the time, "I don't think we have the kind of evidentiary basis to be talking about impeachment at this time. I don't really think you should, when it's such an important matter and it's frankly still in the abstract."

Barr kept at it. Before anyone had heard of the name Monica Lewinsky or read the salacious report ultimately produced by independent counsel Ken Starr, Barr had introduced House Resolution 304, directing the House Judiciary Committee to investigate whether grounds existed to impeach the president. When the Lewinsky scandal broke, unanticipated by anyone (including Barr), the groundwork had been laid.

Waters is following the Barr model. Impeachment is the nuclear option of nuclear options, when it comes to Congress' confronting the president. It's the only means by which a president can be removed from office for cause and it isn't easy to do, especially when the president's party holds the majority. (Only two presidents have ever been impeached by the House — Clinton and Andrew Johnson —and neither was convicted in the Senate, where a two-thirds majority is required.) But if one of Trump's many scandals should end up implicating him in a crime, it's important that the Democrats and the American people be ready for it. Waters is getting the I-word out there into the atmosphere and priming Trump's political opposition. It's a job that takes guts and foresight and she's good at it.

If the Democrats can pull off a wave election in 2018 and take back the House, they will be ready to follow an impeachment investigation wherever it leads. That will largely be thanks to Maxine Waters.