WATCH: John Oliver pleads with France not to "f**k up" its election and select Marine Le Pen 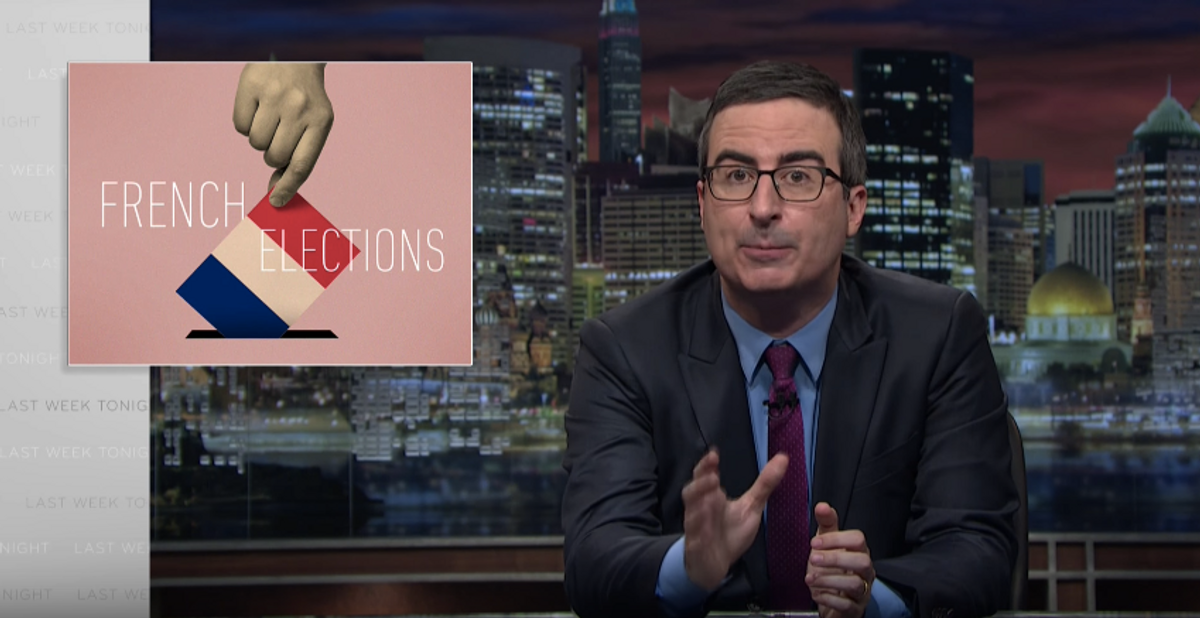 On Sunday night comedian John Oliver explained the importance of the upcoming presidential election in France. After the Brexit vote last year, there has been a spread of far-right nationalism in Europe, and a potential departure by France from the European Union could dismantle the decades-long pact. And that, Oliver noted on "Last Week Tonight," is only reason why France's election is really important.

France's president, François Hollande, is brutally unpopular with a 4 percent approval rating. The two current front-runners are Emmanuel Macron, who is center left, and Marine Le Pen, president of the far-right National Front. Oliver said he believes Le Pen is the most interesting figure, partly because of her father's anti-Semitic history.

Le Pen's father, Jean-Marie Le Pen, founded the National Front and repeatedly has been found guilty in France of the crime of denying the Holocaust. Oliver noted that Jean-Marie has said of one Jewish critic, "We'll put a batch in the oven next time."

“Honestly, she is the main reason you should be invested in this election," Oliver said of Marine Le Pen.

Le Pen kicked her father out of the National Front and has worked to "rehabilitate" the image of the party; Oliver showed a clip of one voter who said he was more likely to support the party because the elder Pen was no longer part of it.

"Elegant presentation doesn't negate poisonous content," Oliver warned. "A Klansman is still a Klansman, even if you slap a monocle and a top hat on him and give him a cane."

"The point is Le Pen is particularly popular among young people in France who have a high rate of unemployment and have responded to her promises to institute programs to give them jobs and encourage a national preference in employment making it more expensive for businesses to hire noncitizens," Oliver explained.

The late-night comedian examined the serious similarities between the U.S. election last November and how the media class widely presumed that Donald Trump would lose. French media outlets overwhelmingly believe that Le Pen could never win, but Oliver called their coverage "reckless overconfidence," the way it was in America. Oliver called the media's actions akin to claim that "the Hindenburg is the safest form of travel there is."

Oliver finished the segment by pleading with the people of France in their language saying, "Britain and America fucked up. Don't fuck up, too."