A right-wing xenophobe, a smooth-talking neoliberal and a surprise leftist insurgent — haven't we seen this movie? 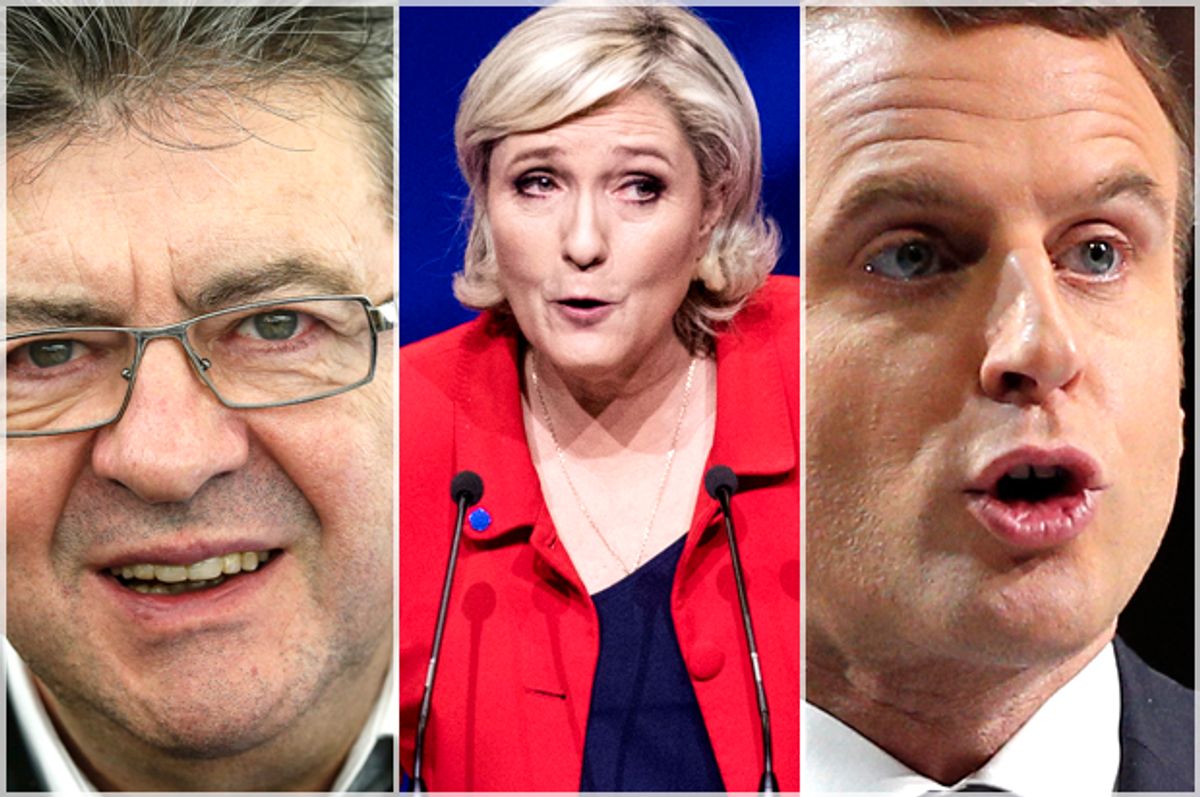 This coming weekend, France will hold the first round of its presidential election, and after months of political drama comparable to last year’s election in the United States — including a corruption scandal that has knocked down former front-runner François Fillon to fourth place — it appears increasingly likely that this will be the first election since the Fifth Republic’s founding in 1958 when neither of the final candidates are from the center-left Socialist Party or a center-right Gaullist party.

If the latest polls are accurate, the top contenders are Marine Le Pen of the National Front, who has frequently and justifiably been compared to Donald Trump; the 39-year-old centrist and former banker Emmanuel Macron, politically akin to Hillary Clinton; and the veteran leftist Jean-Luc Mélenchon, a fiery, rumpled-looking orator who has been compared to Sen. Bernie Sanders. The Socialist Party’s surprise candidate, Benoît Hamon, was briefly designated as the Bernie Sanders of France, but his campaign and indeed his entire party seem to have collapsed, largely thanks to the disastrous presidency of his fellow Socialist François Hollande.

For months Le Pen and Macron have remained in the lead, but Mélenchon has since jumped in the polls after making a big impression in televised debates earlier this month, and now is just a few points behind the front-runners. So it is shaping up as a close contest between three competing political forces: far-right populism, neoliberalism and democratic socialism. Haven't we seen this movie before?

Though the independent Macron has advertised himself as a fresh-faced outsider who is above ideology — promising to combine the best ideas of left and right — the neoliberal establishment is openly rooting for the former investment banker at Rothschild. Macron espouses much the same “third way” centrism that Tony Blair and Bill Clinton peddled to the English-speaking world in the 1990s. Socially liberal and economically conservative, Macron served as the economy minister under Hollande for two years, pushing through a package of pro-business reforms. Although he has promised to preserve much of the French welfare state, he also wants to cut corporate taxes and eliminate 120,000 public-sector jobs and broadly supports economic deregulation.

In other words, despite presenting an image of change and new ideas, Macron wants to continue down the same neoliberal path that Europe has followed for the past 30 years. Considering how well he has done personally under the current system, it is unsurprising that he wants to preserve it. But the status quo is what has produced the unpredictable populist explosion in France, Britain, the U.S. and other Western nations. Obstinately remaining on the same course will only exacerbate the current crisis and strengthen the far right. As columnist Owen Jones recently pointed out in The Guardian:

[I]t is an illusion to believe that this investment banker who wants to slash 120,000 public-sector jobs — at a time of rampant job insecurity — and cut taxes on the rich will cure France’s anger at the status quo. A savvy Le Pen no doubt has her eyes on the real prize: the 2022 presidential race.

This brings us to Le Pen and Mélenchon, the two populist candidates (excluding Hamon, currently in fifth place) who want to overthrow the status quo in France and Europe. These two candidates have some vague similarities, yet they are polar opposites on the majority of issues — and even on the ones they seem to have some agreement, there are fundamental differences.

Both are critical of the EU and free trade deals, for example, but Mélenchon is not against Europe or internationalism like the nationalist Le Pen. He is simply opposed to an undemocratic Europe dominated by elite technocrats and financiers (like Macron). While Le Pen openly wants the European project to fail, Mélenchon advocates a “democratic reconstruction” of European treaties. While Le Pen scapegoats immigrants and refugees, Mélenchon is vehemently anti-racist and anti-xenophobic and points to the economic and political elite — as well as the capitalist system itself — as the source of the current woes in Europe and around the world.

Like all reactionaries, Le Pen wants to turn back the clock and restore a golden age that never was. (In this way, she is strikingly similar to the reactionary Islamists whom she regularly attacks). By contrast, Mélenchon wants to build on the enormous social progress that has been made in France, while confronting the societal ills that have resulted from the current economic and political system.

If there is one thing that Mélenchon and Le Pen emphatically agree about, however, it is that Emmanuel Macron is an empty suit who is offering more of the same. Le Pen has branded him the “candidate of finance,” while Mélenchon has called him out for being in the pockets of big donors. Macron made millions of euros in his banking career at Rothschild (paging Alex Jones!), making him a perfect foil for Le Pen. Mélenchon is much better suited to challenge the right-wing demagogue with his left-populist platform. As long as Hamon remains in the race, however, the left vote will likely be split, making it difficult for Mélenchon to get past the first round.

In a face-off between Macron and Le Pen in May, the former would probably win, as Le Pen remains too divisive to win an outright majority. Of course, that's exactly what we said about Hillary Clinton and Donald Trump. And as The Guardian's Jones observed, even if Macron is elected president, his neoliberal agenda is likely to inflame populist anger still further and give Le Pen a real shot at winning in 2022.

The unpredictable French election clearly reflects what is happening in the rest of the world today, with the old neoliberal order gasping for air and different populist movements vying for control. Like neoliberal politicians in other countries, Macron has billed himself as a practical, post-ideological candidate of the 21st century and depicted his populist challengers as political dinosaurs. Last week at a rally, Macron directed this quip at the 65-year-old Mélenchon: “The Communist revolutionary was a Socialist senator way back when I was in secondary school!”

In last year's American election, of course, similar ageist attacks were directed at the 75-year-old Sanders, who happened to be the most popular candidate with younger voters. Despite being well into the Social Security age bracket, the democratic socialist was the choice of millennials in America because he offered a politically relevant platform and had years of progressive activism under his belt — much like Mélenchon, who responded to Macron’s wisecrack by pointing out that while he left the Socialist Party years earlier to “take up the fight,” Macron “left to work for Rothschild's bank.”

The truth is that centrists like Macron and Clinton — and other Establishment figures like former Gov. Jeb Bush or François Fillon — are the true political dinosaurs of 2017. The Zeitgeist of the moment is populist, and until the major problems created by globalization and corporate capitalism are properly dealt with, people will grow only more angry and more desperate — and more susceptible to demagoguery. It remains to be seen, of course, whether a progressive, democratic socialist form of populism can forge a new path forward.

In his typical caustic style, Mélenchon declared last week  the “Versailles court is having fun while the people are starving to death,” and “the limit has been reached and I'm the symptom.” While Mélenchon is indeed a symptom, so is Marine Le Pen — and if the progressive left cannot successfully usher in a post-neoliberal age, the far right may seize power instead.