Got their mojo working: The stars of "Hap and Leonard" discuss the second season's complex mystery and its brew of social and political commentary

Like its star Michael K. Williams says: "America is not black and white. It's not right or wrong. It's all of it" 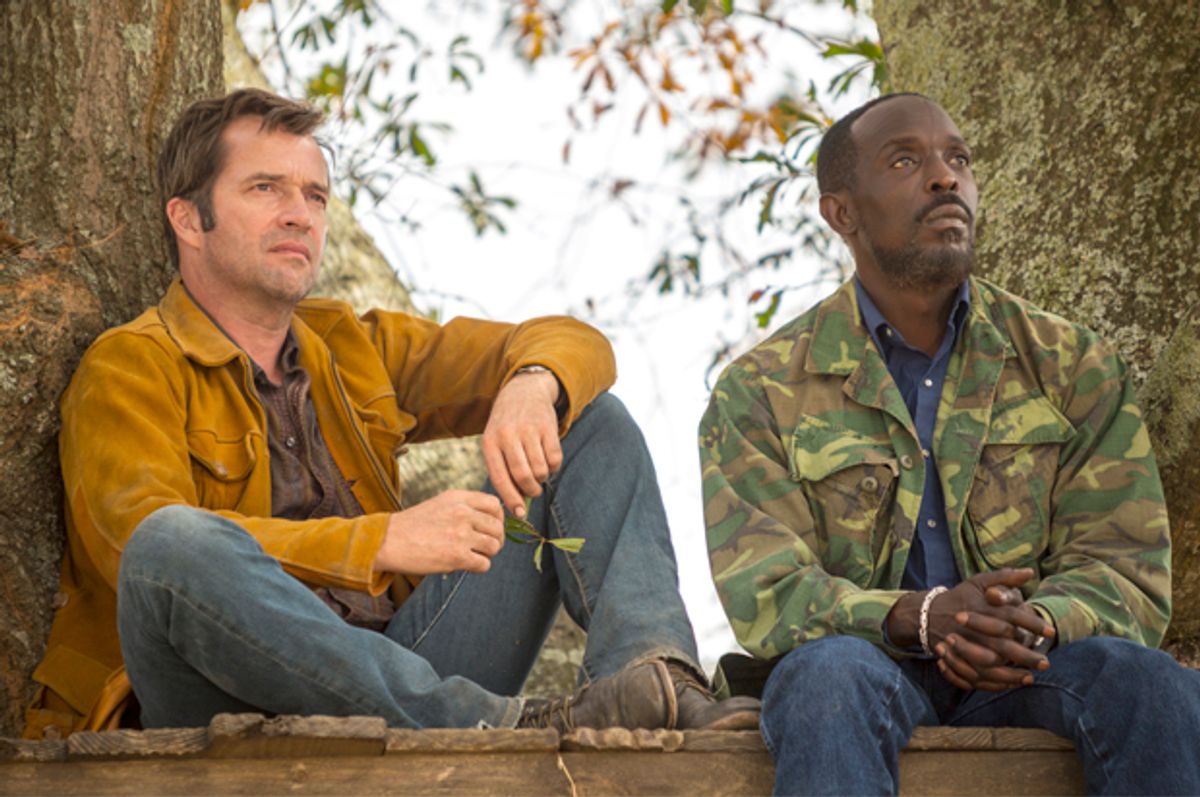 The second season of SundanceTV’s “Hap and Leonard,” which ends tonight at 10 p.m., is a tapestry of presumption and misdirection, beginning with one theme and revealing itself to be something else altogether as it draws to a close. Hints of magic and religion lead and then trail the story of this “Mucho Mojo” season (based on Joe R. Lansdale’s novel of the same name), a jumbled mystery involving multiple disappearances of black boys, a local police force unmotivated to find them, and the struggles of the falsely accused — Leonard, in this case.

But what began with Hap Collins (James Purefoy) and Leonard Pine (Michael Kenneth Williams) finding the bones of a child under the floorboards of Leonard’s inherited home soon bolted and invaded long-forgotten crannies in Leonard’s East Texas home. As is the way of solutions attributed to faith or mysticism, the flashiest elements are there to draw our gaze away from the truth.

The story began in a demented rootworker’s shack, wound its way through the courtroom of a corrupt, racist politician and a bigoted precinct to, at last, a harvest carnival — carnies being the third favorite suspects in mysteries, right behind spouses and the butler.

Themes of injustice and prejudice still played out in these latest episodes of “Hap and Leonard,” but the main villainy was not born of the clash between black and white, but between resignation and anguish and evil cloaked by righteousness.

The charm of this underappreciated series remains in its portrayal of a fiercely loyal and loving male friendship — an aspect of life that, as Purefoy observed in a recent interview with Salon, we don’t typically see on television.

“The relationship between Hap and Leonard is the relationship I have with most of my male friends,” he said. “There are an awful lot of men out there who have relationships like this with men, friends who you deeply, profoundly love and care for, and you know they've got your back and you've got their back. Yet those relationships aren't shown on television. Why not? What's going on? This is our experience as men.”

The profound bond of “Hap and Leonard” may be the drama’s true lead. But along the way, Season 2 also unspooled provocative, atypical commentary about race relations and our culture’s sense of community.

“’Hap and Leonard’ is diversity to the tenth power. It doesn't get more opposite ends of the spectrum than these two guys, and they love each other,” Williams said.  “To me, that's what makes America great, is that type of relationship. It's cultural. When I say cultural, cultural is racial, but it's also environmental. It's generational. It's a lot of different things, when you say culture.”

And while the 1980s East Texas setting may be specific, with each episode brimming with details that nail it down to a place, the story’s demonstration of what it means to be an ally — a popular topic of social media discussion and debate in our current era — is extraordinary.

Hap has a personal stake in putting his own freedom and safety on the line to help Leonard, in that this is a man he loves without equivocation or compromise, and the only person to whom he turns in hard times. But the case, and his role in striving to exonerate Leonard, dissipates any privilege he’s initially able to exercise as a white man standing up to injustices visited on Leonard and his neighbors.

“There was a need to show that there were communities of people that believed in something, that believed in an element of real truth. Not fake news, not a relative truth, but a truth,” Purefoy observed. “A reality of who are the good guys and who are the bad guys. That's something that is very hard to quantify now, now that we have Lex Luthor as President.”

Never, however, does “Hap and Leonard” tumble into eye-rolling white savior territory; the color of Hap’s skin only has so much currency, since he’s also an ex-con who works at a garage.

In this way and others, Season 2 of “Hap and Leonard” goes this a step further in its look at the complications of race and interracial relations. The fascinating grit doesn’t happen in skirmishes with the law, but within the community setting, a mostly African American space where Hap is accepted to a point, and one contending with ailments its citizens visit upon each other in addition to the intrusion of crooked cops and politicians.

“But I think we're better as a nation when we put the problem there, and not focus on the fact of the racial tension. . . [I’m] not saying that it doesn't exist, but what I'm saying is, at the root of that racial tension is something deeper, a separation. And at the core of that separation, I believe, is what Martin Luther King was talking about. It's the have and have nots, more so than white and black.”

The second season finale of the drama closes many doors, some of them in ways that are frustrating, or deeply funny. Two particular endings would be heartbreaking if we didn’t have the knowledge that every romance the pair flirts with would come in second place to this friendship.

The final image of the season is hauntingly sinister, nevertheless, and reminds viewers that even though these two seem to have everything figured out, some people in their own backyard have not and entertain no intentions of doing so in the near future, if ever.

And in a sense, this notion has parallels to the sophomore season of the much more widely-acclaimed show with which Williams is associated, which broadened its scope beyond that of the first season.

“I'll never forget when I was doing ‘The Wire,’” Williams said. “When Season 2 came around, and I went to David [Simon, the show’s creator], I said, ‘David, why are you giving our show to white people? Why are you doing this to us?’

“He was like, ‘White people? . . . Trust me. If I were to go right back to the projects, it would make your world seem so small.’ He said, ‘The world is bigger than just that. Trust me. I got you.’ When I saw how he wove all of it together, all I could say was, masterful. Masterfully done,” he said.

Williams continued, “I see Joe Lansdale doing his version of the same thing. America is not black and white. It's not right or wrong. It's all of it. We have some ugly, ugly skeletons in our historical closet. We've got some beautiful memories. And there's a lot of hope still.”