Ellen isn’t your scapegoat: Caitlyn Jenner has no one to blame for her tarnished public image but herself

In her memoir, “The Secrets of My Life,” Jenner blames DeGeneres for her lack of LGBT fans 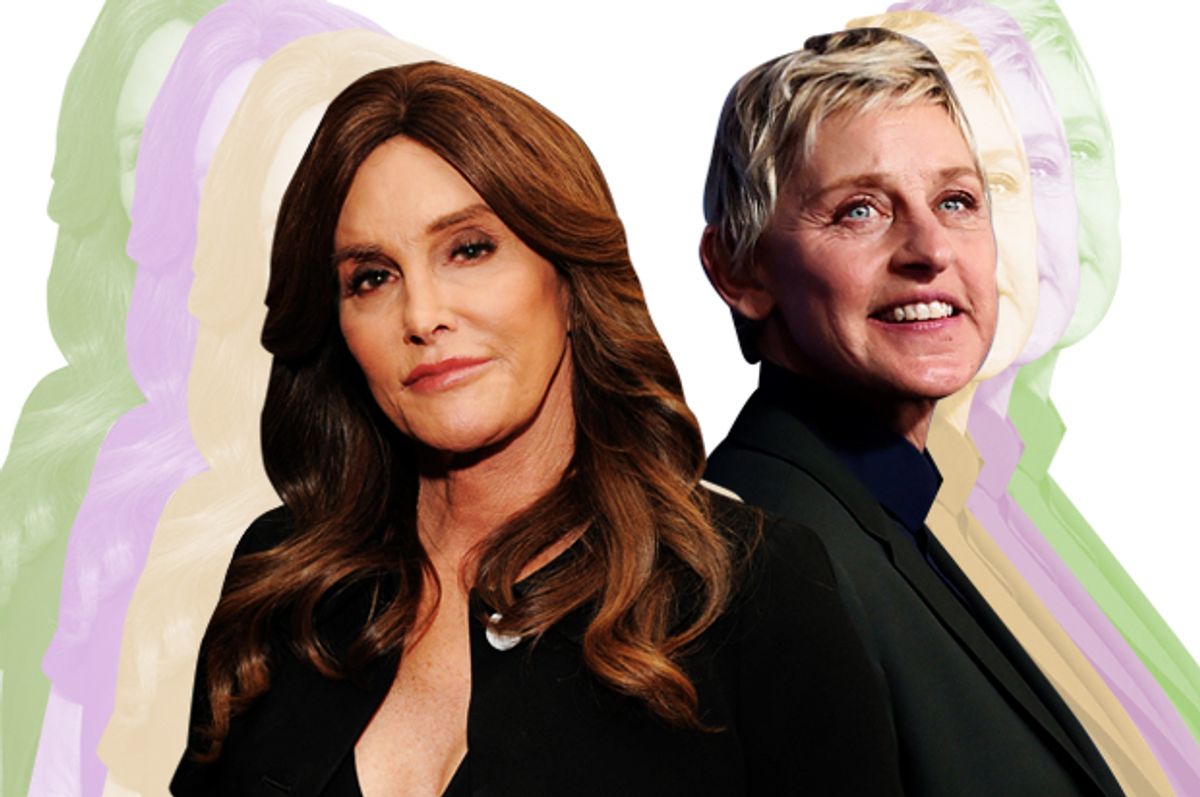 Caitlyn Jenner still doesn’t get it.

In an excerpt of the Olympian’s forthcoming memoir, the 67-year-old blames talk-show host Ellen DeGeneres for her poor standing with the LGBT community. Jenner, who came out as transgender during a May 2015 interview with Diane Sawyer, appeared on “The Ellen Show” a few months later to discuss her evolution on LGBT issues. The gold medalist complained in her book, “The Secrets of My Life,” that DeGeneres “took what I said out of context” to make the interview “go viral.” In the now-infamous segment, Jenner confessed that she was slow to support marriage equality, claiming that she’s a “traditionalist.”

“I did not initially understand why marriage was so important, influenced no doubt by my own personal experience,” she added in the memoir, which is set to be released later this month. “Now I do, and it’s a wonderful thing to see.”

With all due respect, it’s utterly absurd and disingenuous to suggest that DeGeneres — who challenged Jenner’s evolution on the issue in a calm yet respectful manner — has anything to do with her widespread unpopularity. Jenner knows better. The reason why the former reality star has become a pariah in the LGBT community is that she pissed away all the goodwill she earned two years ago with her continued support of the Republican Party, as well as her repeated tone-deaf comments on trans issues. If she wants to blame someone for the mess she’s made of her public image, Jenner shouldn’t point the finger at Ellen. She should call up her good friend Donald Trump — or better yet, get a mirror.

To watch a figure who at one time was so universally beloved drive her career off a cliff has been utterly heartbreaking — but nobody can say the LGBT community didn't try to stop it.

Jenner was a cause célèbre in 2015, lauded for her public bravery in becoming one of the few famous figures to ever come out as transgender. A former Wheaties box fixture, Jenner won the ESPYs' Arthur Ashe Courage Award, meant to honor trailblazers and game changers in professional athletics. Previous recipients of the honor have included Billie Jean King, Muhammad Ali, Howard Cosell and Michael Sam — quite illustrious company. The public support for Jenner was so overwhelming and unconditional that “South Park” satirized the fact that if she got a pimple, you’d have to call it “stunning.”

As Tyra Banks might say, we were all rooting for her. But alas. Oh, alas.

The cracks in Jenner’s carefully curated PR blitz started to show after the Olympian started speaking out about her political beliefs, which had always leaned conservative. She was a Republican before her transition and a Republican she would remain. As I wrote in an op-ed for the Los Angeles Times, there’s actually something quite noble about her persistent claims that she can change the GOP from the inside — by working with lawmakers and politicians who may have never met a trans person before. Jenner gave a rousing speech at an event timed to the 2016 Republican National Convention, saying, “The Republican Party needs to understand, they need to know people who are trans.”

But as anyone with a racist grandma knows, there’s a big difference between pushing someone you love to evolve — whether it’s a relative or a favorite conservative politician — and excusing her behavior. Jenner has continually defended, dismissed and ignored the transphobic policies of bigots who have spent their entire lives denying the right of people like her to exist.

After Sen. Ted Cruz announced his candidacy for president in 2015, Jenner offered her services to the Tea Party Republican to be his “trans ambassador.” In a nightmare interview with The Advocate, the former media darling came out as Team Ted — all but beating her image as a trans advocate to death with a shovel in the process. “I think [Cruz is] very conservative, and a great constitutionalist and a very articulate man,” Jenner said about the politician who once referred to transgender girls who want to use the restroom that matches their gender identity as nothing but “boys, with all the God-given equipment of boys.”

“Let’s say he goes on to be president,” Jenner added. “And I have all my girls on a trans issues board to advise him on making decisions when it comes to trans issues. Isn’t that a good idea?”

Let’s hope this doesn’t need to be said but: No, Caitlyn, it isn’t.

Jenner’s POTUS of choice was the most vocal opponent of LGBT rights during the 2016 election, a man so virulently opposed to even basic equality for trans people that conservatives believe it alienated voters who couldn’t understand why Cruz wouldn’t stop talking about bathrooms. After North Carolina passed House Bill 2 last March, the Texas Senator told trans people incensed about the anti-LGBT law, which prevented them from using public restrooms that match their identity, that they could go to the “bathroom at home.” It’s telling that when Jenner endorsed him, Cruz’s team offered a swift “no comment” in response.

After Cruz dropped out of the race, Jenner switched to Trump, who she claimed is “very much for women” in an interview with Stat magazine. “He seems very much behind the LGBT community because of what happened in North Carolina with the bathroom issue,” Jenner added. “He backed the LGBT community.”

In a recent op-ed, The New York Times called out the “fallacy” that Trump, who has spent his entire presidency quietly chipping away at LGBT rights, is an ally to this community. The Times cited the “rolling back” of LGBT inclusion in federal data collection — including with the 2020 Census — and the recent decision to revoke protections for trans students passed under the Obama administration. Jenner condemned that repeal, calling it a “disaster” for LGBT youth, yet she has continually defended the very people who target those students for discrimination.

Take this exchange from a first season episode of “I Am Cait,” Jenner’s recently canceled reality show. Her friend, writer Jennifer Finney Boylan, brought up the failed Equal Rights Ordinance proposal in Houston. In November 2015, a voter referendum killed the proposed nondiscrimination law following a right-wing propaganda campaign. Conservative critics claimed that allowing trans people to use the restroom that feels most comfortable for them puts at risk women and children — who could be targeted by sexual predators. (Hint: They won’t be.) Jenner, fingers planted firmly in her ears, feigned ignorance about whether that effort was a Republican ploy. (Hint: It was.)

“It just so happens he happened to be a Republican,” said Jenner of a transphobic ad put out by a Texas GOP leader. “I wish he was a damned Democrat. It would have made my argument much easier.”

These are far from Jenner’s only transgressions. The Kardashian cohort has amassed a list of embarrassing gaffes longer than the line to get tickets in the “Hamilton” lottery. The reality star criticized transgender people who don’t have the ability to “pass” in an interview with Time magazine. She didn’t know what the letters in HRC stood for. Jenner even defended a Halloween costume that mocked her Vanity Fair cover, assuring the "Today" show’s Matt Lauer that she’s not one of those easily offended types. She’s not a like a regular trans; she’s a cool trans.

Ellen DeGeneres didn’t make Caitlyn Jenner say or do any of these things. After each controversy and every new way she finds to screw up, Jenner apologizes. She claims that she’s “learning.” That could very well be the case. Just because you’re wealthy, beautiful and famous doesn’t mean you aren’t growing and evolving like the rest of us. But if Jenner is continuing to blame other people for a garbage fire she started herself, it’s clear she’s learned absolutely nothing.