"It's not magic; it's science!" How "Bill Nye Saves the World" makes a gentle stand against ignorance

Starting this weekend on Netflix, the Science Guy leads a new TV crusade that champions facts in our post-truth age 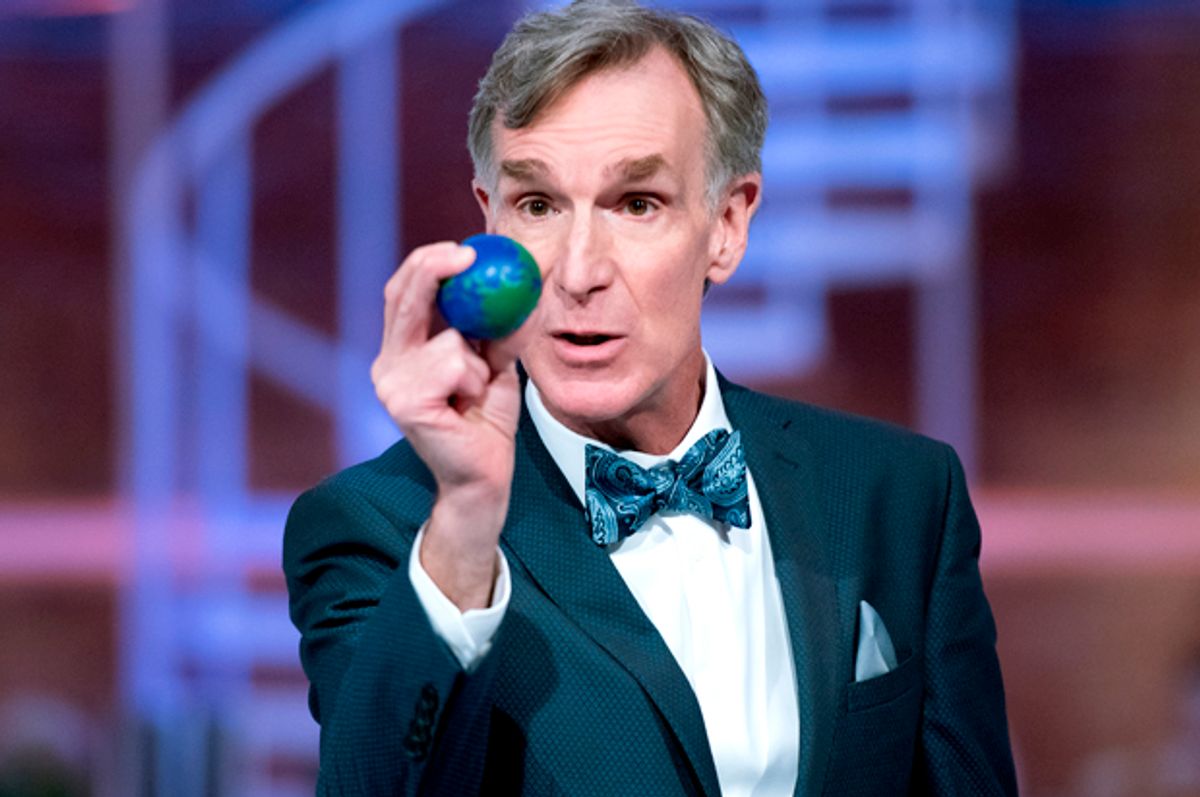 Fact: We belong to a nation overrun by ignoramuses.

This is not an "alternative fact" or a rude opinion. It’s the truth. Our collective ignorance is frightening. Now, whether you find that declaration insulting depends upon which definition of "ignoramus" you’re most familiar with. As translated from Latin, the term simply means “we are ignorant of” or “we do not know.” Ergo, very smart people can be ignoramuses about an array of subjects, and even if they diligently work to become informed, they can still make unwise choices.

The pejorative meaning, however, is that I've called my fellow citizens idiots. This is true only if you’re a climate change denier.

Bill Nye does not think we are idiots. Misinformed, maybe. Lacking knowledge or comprehension of the thing specified, sure. That’s no crime. Indeed, Nye has faith that, with the right information and a renewed emphasis on critical thinking skills, humans are still capable of doing the extraordinary.

In his new Netflix series “Bill Nye Saves the World,” the avuncular Science Guy is as friendly as he ever was and extra careful in his approach to topics such as global warming and immunization and the dangers posed by “alternative” medicine.

Think of him as the science version of the Catheter Cowboy, the parody character introduced this season on “Last Week Tonight with John Oliver.” People who enjoy Oliver’s faux pitchman, a commercial-break regular for Fox News viewers in the D.C. area, know two things. One, he doesn’t like pain when he caths! And two, he can explain basic principles about the nuclear triad, sexual harassment or math as it applies to American Health Care Act to the ignoramus currently occupying the Oval Office.

Nye’s approach is several leagues friendlier than that of the ornery Catheter Cowboy, but no less effective in simplifying the reasons that our planet’s survival depends on adopting a communal approach to solving the world’s problems. But in totally nonthreatening way!

Early on in the series' climate change episode, Nye explains that “Bill Nye Saves the World” is not really a kid’s show. In other words, it’s not a sequel to “Bill Nye the Science Guy,” the '90s era PBS series that played a key role in the childhood of scores of millennials.

What he’s created instead is a children’s science show catering to the entire family — adults and children, and adults whose paradigm is informed by childish logic. In one bit involving a diorama used to explain evolution, he spies a familiar sea vessel filled with animals. “There’s no freaking Noah’s ark," he blurts out, quickly hiding it as the audience erupts into giggles. "Did not happen.” This is a fine joke, and it also may be news to some people watching that episode.

When you pause to think about it, it’s utterly insane that there’s still a need for Nye to explain simple ideas about how vaccinations actually work to fully matured human beings, or why we should all be working to curb our contributions to the rise in global temperatures.

Then again, what do I know? As it turns out, far less about GMOs than I thought I did.

“Bill Nye Saves the World” is a convivial series that imports elements from Nye’s old series (mainly those amusing demos with bubbling colorful liquids, Bunsen burners and flasks) into a format that resembles “The Daily Show.” Filmed before a live studio audience, each episode includes lighthearted skits and filmed segments featuring actors such as Zach Braff and Rachel Bloom, George Wendt and mixed martial arts star Randy Couture (doing awards-worthy work in his portrayal of the toughest creature on the planet, the tardigrade.) Panels of experts and famous people who have interesting opinions, such as Wil Wheaton, weigh in on debates surrounding each episode's focus.

Another “Daily Show” swipe is the incorporation of “Bill Nye Saves the World” correspondents; one is model and computer science nerd Karlie Kloss. Nye is no dummy; plainly he’s gambling on some people tuning in expressly to ogle a Victoria’s Secret Angel and hoping they’ll also take to heart even a smidgen of the science she’s dropping on them. Kloss, by the way, does a fine job taking viewers on a tour of Venice and showing us why this legendary city is seriously threatened by rising sea levels.

Basically, this is the modus operandi of “Bill Nye Saves the World”: reminding viewers not only of how central good science is to our lives, but also championing independent use of our brains.

“It’s not magic, people; it’s science!” he says more than once, doing so enthusiastically and devoid of condescension.

All 13 episodes of this series, directed at “grown-up kids, all over the world,” arrives on Friday. That's one day prior to the March for Science. Another example of contemporary insanity is that in 2017, tens of thousands of people in cities across the nation and the globe must march to affirm the value of fact-based, nonpartisan research, medical and technological advancement of reason.

And yet, here we are.

Nye is one of the speakers participating in the Earth Day and Science March taking place this weekend in Washington. This will be a handy PR opportunity to promote his Netflix show, but people who choose to watch a few episodes will see he’s apoplectic with frustration at our collective lack of action on the issue. He’s so passionate, in fact, that he takes a moment to rail about it during the climate change episode.

Overall, however, “Bill Nye Saves the World” prefers to inspire awe in its viewers as opposed to lecturing them, and this approach works. Nye and his guests skim each topic, opting to lean toward the inclusivity of encouraging laughter and piquing interest as opposed to bombarding the viewer with stats. (That's a job for many documentaries that most of us haven't watched.) In addition to taking on climate change, vaccination, health quackery and GMOs, the six episodes made available to critics also tackle theories regarding the origins of life and the promise and threat posed by artificial intelligence.

To call Nye the Mister Rogers of Generation Y might be pushing it, but during his PBS series’ five-year run he cultivated enough pop culture cred to keep him in circulation with cameos on such series as CBS’ “The Big Bang Theory” and Comedy Central’s “Inside Amy Schumer.” When it comes to attracting viewers to this show, that level of fame will matter.

“We can do great things!” he encouragingly declares to his viewers. “We can work together to save the world!”

Whether Nye has enough pull to strike a bow again the rising tide of "alternative facts" and post-truths, though, is debatable. While many more people will be binge watching TV than protesting this week, one has to wonder how many will choose to absorb this show.

That gets to the heart of many of the world’s problems, doesn’t it? Unless something directly affects our lives or is of personal interest, most of us will let just about anything slide. Even when drought threatens the world's food and water supplies, or brush fires race toward communities and threaten the lives and property of our neighbors, we are comfortable enough in our plush, personalized silos to turn away.

This is the arrogance of ignorance, and we all blissfully suffer from it.