Trump's first war is here at home: A military-style assault on undocumented immigrants

After deporting his first Dreamer, Trump has unleashed Jeff Sessions to wage a military campaign on our streets 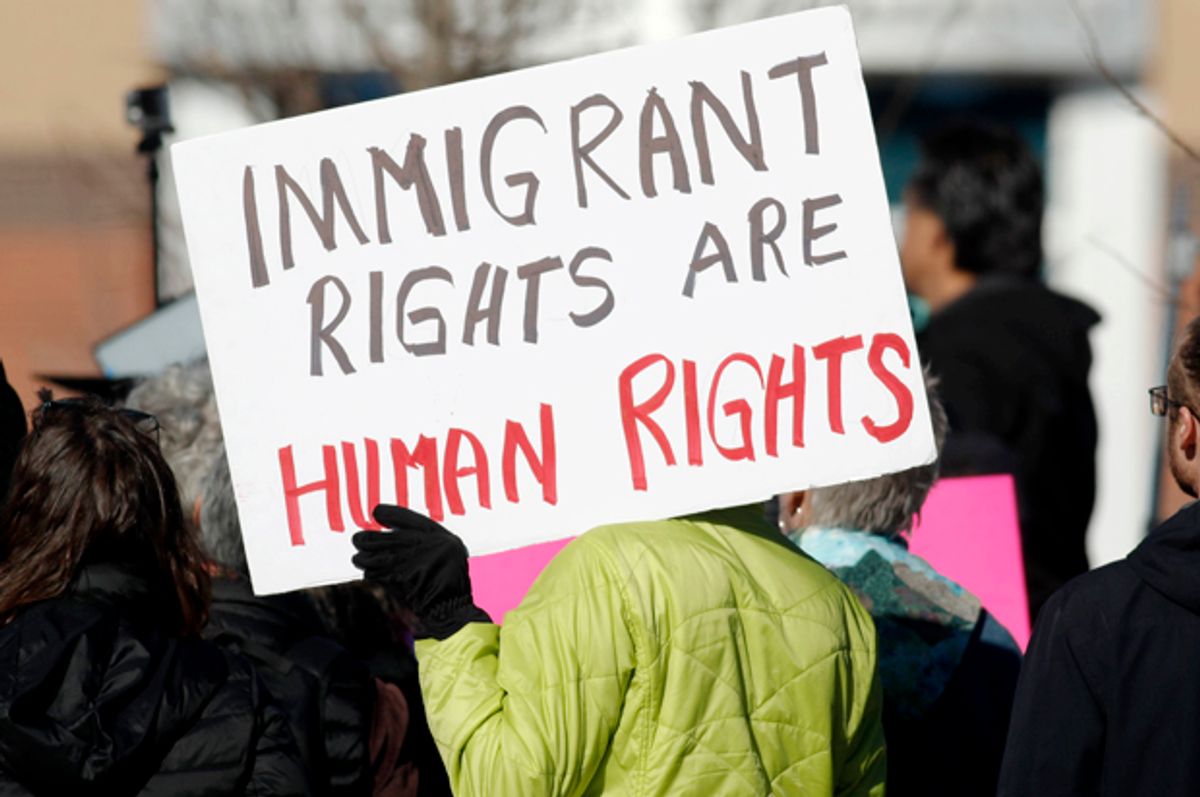 Whenever you get depressed or agitated over the dark turn America has taken, remember that President Donald Trump has a big heart. He told us so over and over again. Sure, he may have denied health care to his infant nephew in order to punish his brother's family for protesting having been written out of the will, but that doesn't mean he doesn't care. As he said at that first wacky solo press conference as president when asked what will happen to the Dreamers and the Deferred Action for Childhood Arrivals program, he loves kids:

We're going to show great heart. DACA a very difficult subject for me. To me, it's one of the most difficult subjects. You have incredible kids, in many cases, not all cases. In some of the cases, they are gang members and drug dealers, too. But you have some absolutely incredible kids. I would say mostly. They were brought here in such a way — it's a very, very tough subject. We are going to deal with DACA with heart. I have to deal with a lot of politicians, don't forget, and I have to convince them what I'm saying is right. I appreciate your understanding on that, but the DACA situation is a very, very — it's a very difficult thing for me because, you know, I love these kids. I love kids. I have kids and grandkids.

He told ABC's David Muir that Dreamers "shouldn't be very worried" because he was "going to take care of everyone."

Well, on Tuesday USA Today reported that the administration had deported its first Dreamer, a young man named Juan Manuel Montes, for the crime of not having his wallet on him when he was detained by police. Conservatives were quick to point out that he had a record of shoplifting and driving without a license, and claimed it was perfectly reasonable to hold immigrant kids to a standard of perfection.

Meanwhile, MSNBC inexplicably decided it would be a good idea to do a live "ride along" with an Immigration and Customs Enforcement agent on a morning raid in Los Angeles. The reporter looked into the camera in the back seat and explained in a near whisper, "We are basically on a stakeout. We are waiting for a target to come out of his home. And enforcement removal agents are going to swoop in and they are going to arrest him. We have seen two of those happen so far today."

It was all very exciting. It was also somewhat of a lovefest, with the agent explaining that sanctuary cities are a "roadblock" to public safety and that nothing had really changed, except that the previous administration had forced officials to concentrate on "certain" criminals. Now they're able to concentrate on a "broader spectrum" of criminals, which he explained would encompass all undocumented immigrants since it's a crime to enter the country illegally. He seemed nice.

The president weighed in on Tuesday with an early-morning tweet about some super bad hombres:

Naturally he blamed President Barack Obama. He cannot utter more than five words without blaming someone for something. Apparently, his fans find this petulant whining to be a sign of machismo.

Trump is also completely wrong about MS-13, a street gang that was formed more than 30 years ago under the reign of the notorious wimp Ronald Reagan. A comprehensive FactCheck.org piece has explained the origins of the gang and how it has spread. It found that law enforcement agencies for the last decade have been estimating that gang comprises about 10,000 people. There is no evidence that it grew under President Obama's administration, but that did not stop Attorney General Jeff Sessions from suggesting the same thing during a speech to the Organized Crime Council later in the day. So now this is an official administration talking point.

Sessions didn't mention Obama by name but said that “because of an open border and years of lax immigration enforcement, MS-13 has been sending both recruiters and members to regenerate gangs that previously had been decimated, and smuggling members across the border as unaccompanied minors.” He is as cavalier about the truth as his boss. The Department of Justice told Fact Check that the information came from the National Gang Intelligence Center, pointing to six specific cases. Five of them originated under the Bush administration more than a decade ago.

More unsettling than the usual xenophobic demagoguery is the fact that Trump and Sessions are not going to be content with ICE raids and roundups. They are seeking to do something much more extreme. Sessions appeared with Tucker Carlson on Fox News on Tuesday night and said that he believes MS-13 qualifies as a terrorist organization. He said:

We can devastate this gang. We’re going after them. We’re not going to allow them to take over a block, a corner of our communities and terrorize people with this violence. We cannot allow this to continue. We will secure our border, expand immigration enforcement and choke off supply lines.

It sounds as if he believes he's a real general, running a real war. And the enemy is not just the "terrorist" gangbangers; it's millions of undocumented immigrants who've been designated as criminals for infractions as minor as driving without a license. And now the administration has even got media "embeds" with the troops, reporting from the front.

I knew Trump was very likely to start a war. It's just not in his character to resist the temptation to flex his muscle and prove his manhood. But I assumed he would fight the hated foreign hordes overseas on their own turf. Unfortunately, whatever happens with our various foreign policy crises, it's looking more and more every day like we're also going fight a war right here, on the streets of American cities.