Trump's wrong-way "armada": Strategic lie or idiotic blunder? Can it be both?

Either Trump, Mattis and McMaster told us outrageous lies or they have no idea where their own ships are 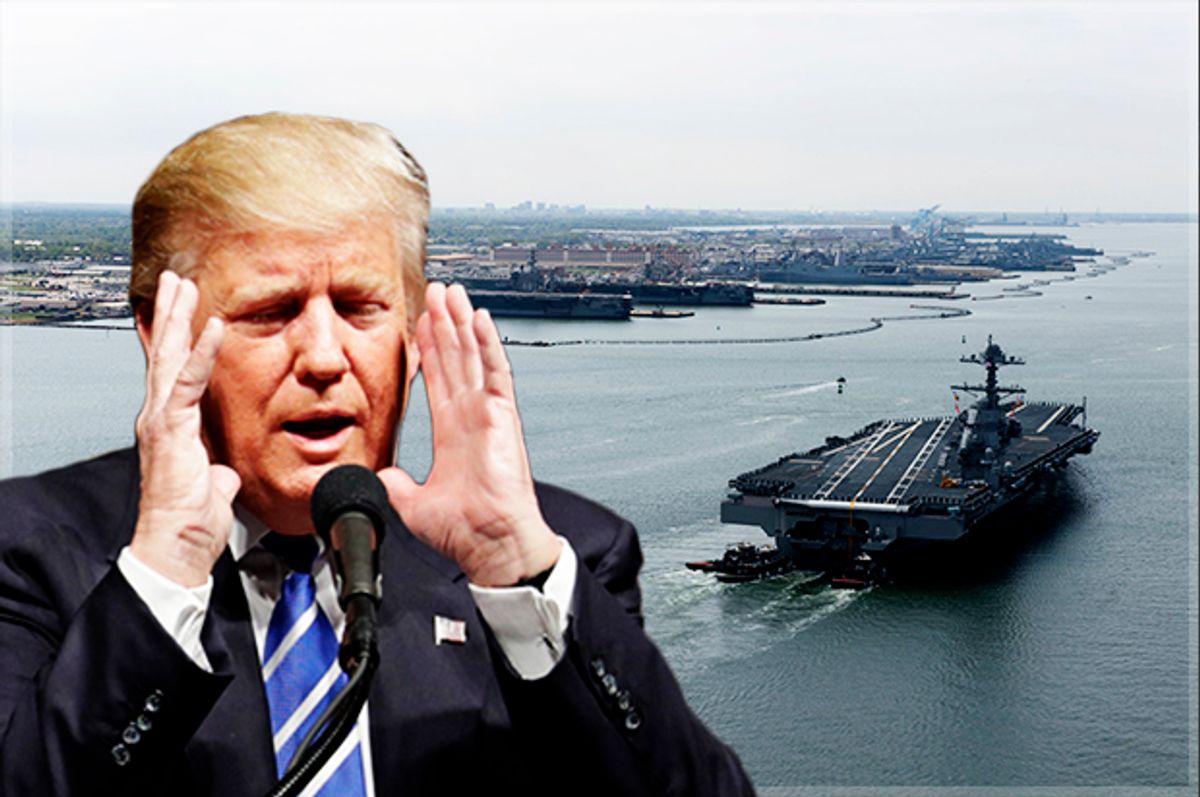 The official word from the White House was quite specific: The USS Carl Vinson carrier strike group was steaming toward the Korean peninsula last week to send a message to Kim Jong Un that any North Korean nuclear tests would be met with American military aggression. The news about the aircraft carrier, with its express purpose of intimidating North Korea, was incontrovertible — at least according to President Donald Trump; his national security adviser H.R. McMaster; his secretary of defense, Jim “Mad Dog” Mattis; and, naturally, his press secretary, Sean Spicer.

For the record, McMaster confirmed to Chris Wallace on Fox News Sunday that the carrier group was on the way: "Well, it's prudent to do it; isn't it?"

Mattis also confirmed the movement, explicitly describing the Carl Vinson’s northern heading: “She operates freely up and down the Pacific and she’s on her way up there because that’s where we thought it was most prudent to have her at this time.”

The president himself infamously described the alleged “armada” steaming to the peninsula: “We are sending an armada, very powerful,” the president began. “We have submarines, very powerful, far more powerful than the aircraft carrier.” (Trump forgot to include “prudent” in his remarks — a word apparently written into the script used by both McMaster and Mattis.)

It can’t be underscored enough that Mattis and McMaster are supposed to be among the most competent senior staffers in Trump’s West Wing. Yet everyone in the White House and apparently in Mattis’ office in the Pentagon was either engaged in a group lie or truly had no idea where the Carl Vinson was or where it was heading. Because, as it turns out, the carrier group wasn’t steaming for North Korea after all. It turns out the Navy vessels were thousands of miles away, moving into position for exercises in the Indian Ocean.

Before Kim Jong Un’s failed missile test last Sunday, and while the communist dictator observed the April 15 national holiday commemorating his grandfather, the Navy released a photo of the Carl Vinson traveling between the islands of Sumatra and Java, which, according to an atlas, are located about 3,500 miles south of where Trump and his brain trust said the ships were supposed to be.

Defense News reported that Pentagon officials “expressed wonderment” at reports about the group’s alleged movement toward North Korea. This would lead us to believe that the Trump White House, including Mattis, McMaster and the president himself, were co-conspirators in a plot to deliberately release disinformation about our military deployments, effectively misleading the American people and, it goes without saying, family members of all the sailors in that carrier group who thought they were headed into a possible nuclear showdown with echoes of the Cuban Missile Crisis.

There are two basic options to explain all this.

First, there’s the lie. Given Trump’s lengthy track record of flagrant lies, it’s entirely possible that the White House deceived the public as a matter of military policy. After all, how could anyone verify the location of an entire carrier group? It turns out, no one did — other than the Navy itself, debunking the whole thing. But it’s difficult to find precedent for a deception like this in past administrations. Certainly there have been disputed lies like the Gulf of Tonkin incident during the Vietnam conflict, or the attack on the USS Maine that precipitated the Spanish-American War. But it’s almost impossible to find instances of an entire White House fabricating the whereabouts of a carrier group.

The second option is somewhat more harrowing, given that we’re talking about a serious miscommunication. It’s possible the president and the secretary of defense had no idea where the Carl Vinson was or where it was going, mistakenly believing it was 3,500 miles north of its actual location. CNN’s Jim Acosta reported via Twitter that, indeed, the whole thing might have been a colossal blunder.

Yeah, so it was just like a “Three’s Company” episode but one that incorporated into the plot an aircraft carrier and the threat of a North Korean nuclear attack against South Korea, Japan or possibly the U.S. mainland. Whoops!

But I’m not ruling out the lie, either. None of us should. During Trump’s interview last week with Fox Business Network's Maria Bartiromo when he talked about the “armada” as well as the most beautiful chocolate cake we’ve ever seen, Trump also said, “We’re not going into Syria.” Later in the interview, he repeated the claim.

That would be welcome news for sure, but unfortunately we’re already in Syria: We already have “boots on the ground” there. In fact, there’s a plan in the works to send an additional 1,000 troops into Syria on top of the hundreds of military personnel already there. In other words, we’re back to the same conundrum: Is Trump lying about Syria? Or does he simply not know that American troops have already gone in?

I understand Trump's half-baked, remedial strategy of keeping everyone in suspense about what he plans to do next, and that would certainly be easier to digest if it was clear that he knew what the hell he was doing in the first place — that he was informed and possessed a level of expertise about military policy. It would also be easier to stomach if he wasn’t such a serial liar about things far more serious than the quality of the chocolate cake at Mar-a-Lago (a venue that's been cited 13 times for health code violations). It’s like his lie about a “secret plan to defeat ISIS,” which, it turned out, didn’t exist other than as a plan to ask the generals to concoct a secret plan.

We have a right to know, to a reasonable extent, what the commander in chief is doing with the military in our names. I don’t expect Trump or Mattis or McMaster to spill the beans about every detail, but it’d be nice to know whether our Navy is engaged in a game of nuclear chicken or whether we’ve officially launched a new war against a sovereign state. And if the president and his highest officials are caught lying about what the U.S. is doing or which new wars it might be instigating, Americans of both parties ought to demand accountability.